Water is used by thermal power plants (TPPs) for a variety of purposes including process cooling in condensers, ash disposal, heat removal from plant auxiliaries, and several other plant consumptive applications. Make-up water for cooling towers accounts for the majority of water usage in a TPP, with a share of 86.25 per cent in the plant’s total water consumption. It is followed by ash handling, which accounts for around 32.5 per cent of the total water consumption, potable and service water (6.25 per cent), demineralisation water (3 per cent), clarifier sludge (2.75 per cent) and coal dust suppression (1.75 per cent). 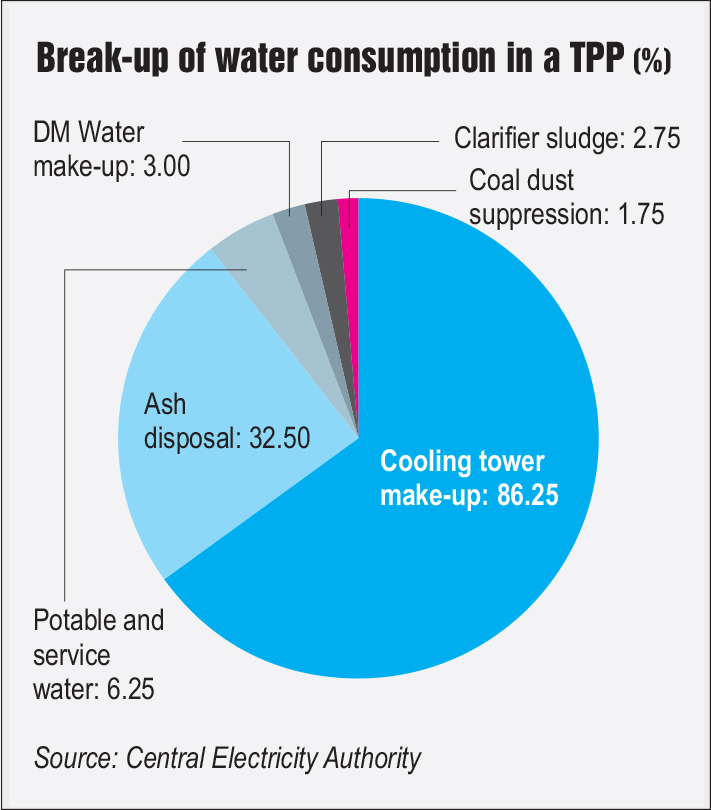 Cooling towers are used in most power plants across the globe to extract heat from hot water. They can be classified on the basis of the contacting mode into dry, wet and hybrid types.

Wet cooling towers operate on the evaporative cooling principle and rely on the latent heat of water evaporation to cool the equipment. These towers typically contain a wet medium called “fill”, which provides a large surface area for faster evaporation. In this process, a part of the circulating water is evaporated.

Dry cooling towers use air as the cooling medium instead of water and do not require much make-up water. This is because the heat is exchanged from the condenser to the atmosphere by cooling of ambient air in finned tubes and no evaporative cooling is involved. However, air is a less efficient cooling agent and it reduces plant efficiency by 2-7 percentage points compared to a similar capacity power plant with a wet cooling tower, depending on the type of plant.

Hybrid cooling systems have elements of both dry and wet cooling systems. Such systems use the best features of the two types of cooling. The wet cooling elements are used on the hottest days of the year and the dry cooling elements during the remainder of the year to conserve water. Hybrid systems can save up to 50 per cent more water than wet cooling towers, though they may still require a significant amount of water, particularly during summers. In addition, hybrid cooling is more expensive.

Increasing blowdown water for preventing biological growth and corrosion is an inefficient method and causes loss of water. Installing a conductivity meter at pre-planned points can help not only in conserving water, but also in reducing sewage generation.

Further, installing flow metres on make-up and blowdown lines can help in determining the make-up-to-blowdown water ratio. The ratios should ideally correspond to the concentration cycles that are being targeted. If the ratios are not equal, it means that the tower is leaking or there has been some sort of improper draw-off. If the desired concentration cycles are not achieved, the systems, particularly the blowdown and make-up valves, must be examined.

In addition, continuously monitoring water levels will make it easier to spot leaks and faulty valves. Strong air flows can make the water surface and water flow choppy. Thus, if the water levels are set too high, it may result in water loss. Water levels in the sump should be monitored and maintained on a regular basis, and excessive water usage should be avoided. 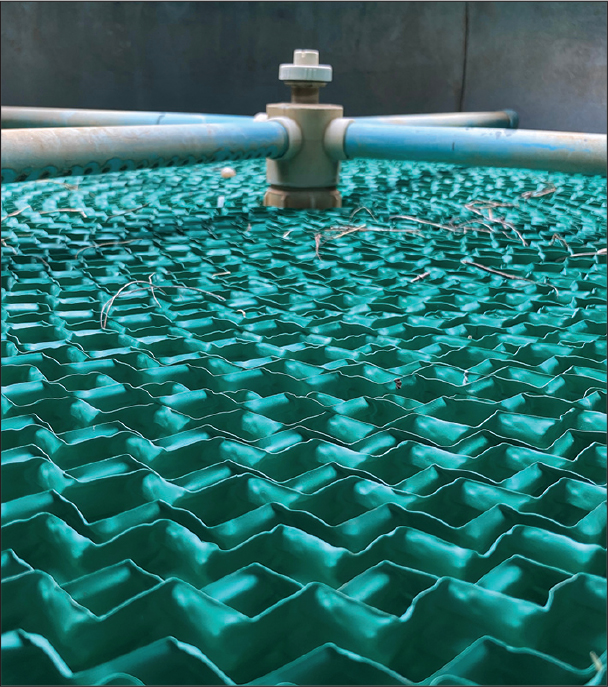 While some older facilities fulfil the 3.5 cum per MWh standard, others face layout restrictions and retrofitting challenges when it comes to adding extra treatment systems. Furthermore, cooling towers are frequently not installed in 20-25-year-old facilities with OTC water systems because of inadequate space. The high capital cost of adopting dry cooling systems, the high amount of chemical treatment required to increase the concentration cycles in order to lower the make-up water used in cooling towers, the additional water required to operate FGDs, and the handling of wastewater from FGD units are some of the other challenges faced by developers in reducing water consumption at power plants.

The installation of cooling towers in new and existing plants can reduce the water requirement of cooling systems. If all OTC systems are replaced by cooling tower-based systems as per the MoEFCC norms, the freshwater consumption of TPPs will reduce by as much as 80 per cent. Therefore, gencos must take steps to install systems and adopt practices that reduce water usage going forward.