Madhya Gujarat Vij Company Limited (MGVCL), with its consistent track record of profitable operations and strong capital structure, has secured the highest rating in the recently released 9th Annual Integrated Rating of State Distribution Utilities by the Ministry of Power (MoP). It is one of the four Gujarat discoms to have received A+ rating. It also has a robust fuel and power purchase cost adjustment framework with regulatory clarity. The discom has maintained its stellar performance over the past nine years. It has a robust planned pipeline for network expansion, including distribution lines, substations and transformer capacity.

Incorporated in April 2005, MGVCL oversees power supply and distribution in the central part of the state, covering the districts of Kheda, Panchmahal, Dahod, Chhota Udepur, Vadodara, Anand and Mahisagar – an area spanning about 23,854 square km and covering over 3 million consumers. As of March 2020, MGVCL’s total line length stood at 134,725 ckt. km, of which about 55 per cent was at the LT level and the remaining at the 11 kV level. During the five-year period between March 2016 and March 2020, the line length grew at a CAGR of 3.1 per cent. The majority of the lines were overhead, with the ratio of underground to overhead line length at 0.114, as of March 2020. Further, the utility had 268 substations and 153,425 distribution transformers at the 11 kV level, which grew at a CAGR of 5.2 per cent and 8.2 per cent, respectively, during the five-year period. MGVCL’s total transformer capacity stood at 5,846.76 MVA as of March 2020, recording a growth of 5.5 per cent since March 2016.

The discom’s consumer base increased at a CAGR of 3.1 per cent during the period to reach 3.27 million at the end of March 2020. Of this, the majority (82.4 per cent) were domestic consumers (2.7 million), followed by industrial consumers at 10.4 per cent or 0.34 million, agricultural consumers at 5.5 per cent or 0.18 million, and commercial and other consumers at 0.8 per cent and 1 per cent respectively. During 2019-20, the discom’s total energy sales declined marginally to 9,754 MUs from over 10,000 MUs in 2018-19. This was mainly due to the decline in sales in the HT industrial and agricultural consumer categories. The decline in HT industrial sales can be attributed to Covid-19. Overall, industrial consumers accounted for the largest share in energy sales at 55.1 per cent (5,372 MUs), followed by domestic (2,720 MUs, or 27.9 per cent) and agricultural (1,213 MUs, or 12.4 per cent) consumers respectively. Commercial and other consumers accounted for the remaining share in energy sales. In terms of HT and LT sales, 61.4 per cent of the sales (5,987 MUs) can be attributed to LT consumers and 38.6 per cent (3,768 MUs) to HT consumers.

In terms of operational performance, as of March 2020, MGVCL recorded aggregate technical and commercial (AT&C) losses of 11.31 per cent. Although higher than the 9.8 per cent in the previous year, it the losses continued to be well below the 15 per cent target set by the MoP. Its billing efficiency was over 94 per cent and collection efficiency was 98.5 per cent. The System Average Interruption Frequency Index (SAIFI) and System Average Interruption Duration Index (SAIDI) stood at 4.03 and 304 minutes respectively. 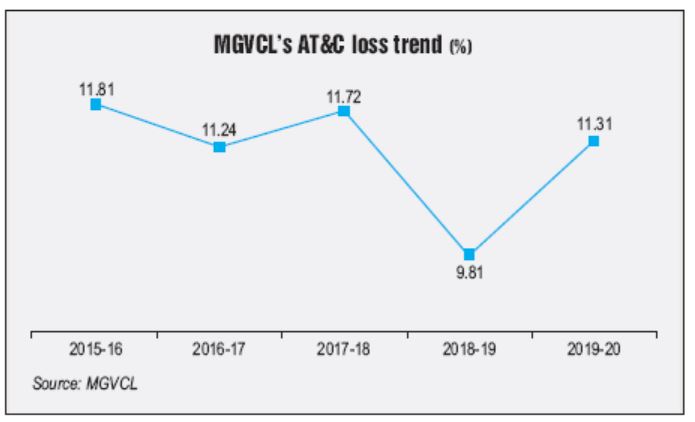 The A+ grade received by MGVCL in the MoP’s annual discom ratings indicates its high operational and financial performance capability among the 44 state discoms evaluated. The key strengths of the discom, as identified in the report, are a consistent track record of profitable operations aided by cost-reflective tariffs, healthy cash collections and adequate subsidy support from the state government; satisfactory cost coverage, interest coverage ratio and capital structure; operational fuel and power purchase cost adjustment framework; timely filing of tariff petitions by the discom and issuance of tariff orders by the Gujarat Electricity Regulatory Commission indicating stability in the regulatory environment; and low receivable and payable days. In the past, the discom had achieved a revolutionary technological breakthrough by inventing an improved single-phase power supply system called the special designed transformer. It was granted a patent for the same in 2010.

MGVCL is a part of a pilot project under the Suryashakti Kisan Yojana, which aids farmers in generating electricity using solar panels for captive consumption and selling the remaining electricity to the government through the grid. It will enable farmers to significantly increase their income. The utility has also taken part in the Surya Urja Rooftop Yojana, which is a part of the National Solar Mission. MGVCL plans to install 8,042 MW of solar capacity in Gujarat by 2021-22. Of this, the rooftop segment will contribute 3,200 MW. Under the scheme, solar rooftop installations are expected to cater to 0.8 million consumers by the end of 2021-22. The electricity generated from these installations will be net-metered, and the surplus power fed to the grid after self-consumption will be purchased by the discom.

On the technology side, MGVCL has introduced RMUs to get uninterrupted power supply even in the event of faults in ring feeders. MGVCL has also implemented GIS in 17 towns, which is being used for quick rectification of faults, identification of high losses, energy audit system planning and analysis asset management. MGVCL is also availing of funds from the central government’s Restructured Accelerated Power Development and Reforms Programme (R-APDRP) to implement works in several urban areas. Under Part A of the programme, MGVCL completed physical works as per sanctioned quantities in February 2019. However, there have been some delays to be addressed in 2020-21. Under Part B, repair and maintenance activities are being undertaken in 12 towns. While SCADA had already been implemented in Vadodara city, its upgradation is in progress. With the proposed SCADA system along with planned investments under the R-APDRP, it is expected that the utility will be able to deliver reliable and improved quality power supply to its consumers. 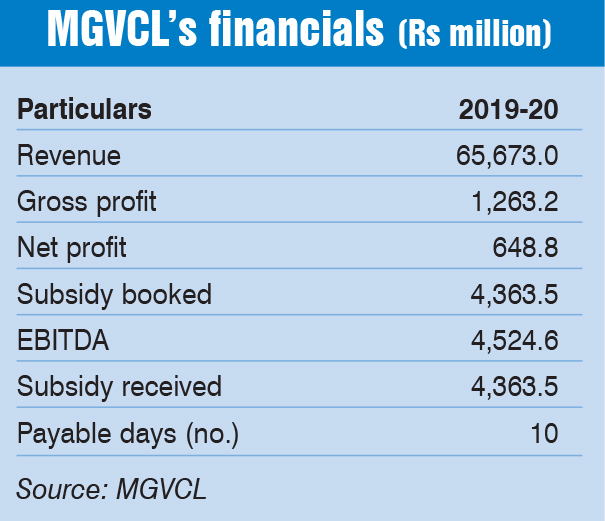 From 2015-16 to 2018-19, the company incurred a capex of Rs 17,573.9 million. In 2019-20, the capex of MGVCL stood at Rs 3,885.58. The company spent Rs 1,868.8 million on distribution schemes, Rs 1,474.5 capex on different rural electrification schemes, Rs 347.8 on various central government schemes such as the Integrated Power Development Scheme, Deendayal Upadhyay Gram Jyoti Yojana, R-APDRP Parts A and B, and the Power System Development Fund. Another Rs 194.9 million was spent on miscellaneous items and other schemes.

A few concerns faced by the discom are its high absolute subsidy dependence given the subsidised nature of tariff, particularly for agricultural consumers. On the expenditure side, its power purchase cost is above the benchmark set in the 9th Annual Integrated Rating of State Distribution Utilities by the MoP. The annual discom rating report has identified that the utility can work to improve the subsidy collection levels and clear the pending subsidy claims from the state government through higher budget provision. In addition, it needs to reduce its power purchase costs. The utility can also take some steps to improve billing and collection efficiency so as to maintain a low level of AT&C losses.

Net, net, the company has an ambitious capacity addition plan in place to meet the future electricity demand of its large consumer base.