The power discoms have been witnessing poor financial and operational performance for a while now, which is attributed to high aggregate technical and commercial (AT&C) losses and mounting discom debt. Recently, in another attempt to revive the debt-ridden power distribution segment, the government announced a new big-ticket power distribution scheme, with an outlay of over Rs 3 trillion. The Reforms-Based and Results-Linked Revamped Distribution Sector Scheme provides a customised approach for each state rather than a “one-size-fits-all” approach. It envisages a reduction in AT&C losses to 12-15 per cent by 2024-25 and lays emphasis on smart metering. Apart from this, several reform measures are under way in the power distribution segment including privatisation of discoms and smart meter deployment to improve  billing and collection efficiency.

The total number of electricity consumers was estimated at around 287 million (based on the data for 53 utilities) as of March 2020. Further, during 2019-20, the total energy sales in the country stood at 1,005 billion units (BUs), as against 709 BUs in 2012-13. Consumer category-wise, domestic consumers accounted for 32 per cent of the total sales during 2019-20, followed by industrial (30 per cent), agricultural (21 per cent) and commercial (9 per cent) consumers. 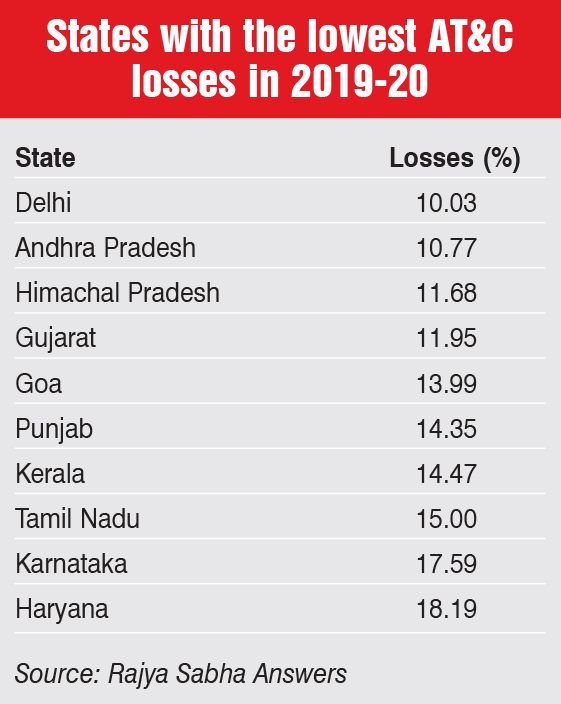 AT&C losses declined from 23.5 per cent in 2016-17 to 21.83 per cent in 2019-20. AT&C losses continue to be higher than the 15 per cent target set under the Ujwal Discom Assurance Yojana across several states. During 2019-20, 15 states recorded AT&C losses of 15 per cent and above. State-wise, in 2019-20, Delhi recorded the lowest AT&C losses at 10.3 per cent, followed by Andhra Pradesh (10.8 per cent) and Himachal Pradesh (11.7 per cent). On the other hand, Jammu & Kashmir recorded the highest AT&C losses (60.5 per cent), followed by Nagaland (52.9 per cent) and Arunachal Pradesh (45.7 per cent). Notably, over the years, discoms have taken several initiatives towards network strengthening and theft reduction, among others, which are likely to have a positive impact on AT&C loss reduction. However, the electrification drive under the Pradhan Mantri Sahaj Bijli Har Ghar Yojana, especially in the rural and far-flung areas, is likely to have a negative impact on AT&C loss levels.

With regard to the financial performance of the discoms, as per the Audited Annual Accounts of Power Distribution Utilities, the annual profit after tax (PAT) figures have also shown an improvement from Rs 338.94 billion (in negative) in 2016-17 to Rs 328.95 billion (in negative) in 2019-20. Apart from this, the gap between the average cost of supply (ACS) and average revenue realised (ARR) for distribution narrowed down to Re 0.28 per kWh in 2019-20 from Re 0.33 per kWh in 2016-17. 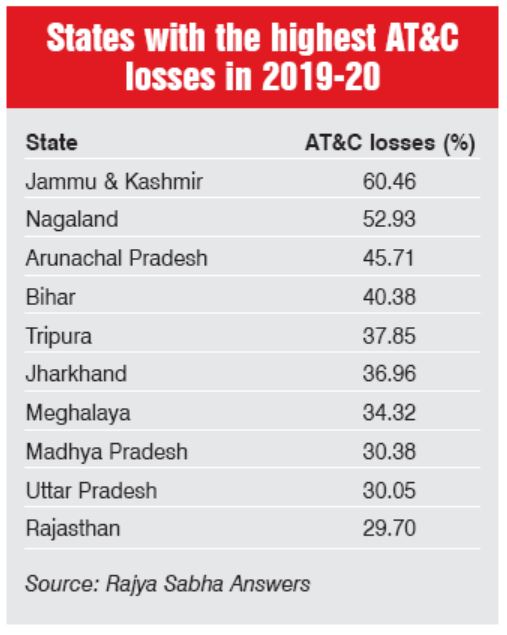 Revamped Distribution Sector Scheme: The central government has recently approved the Revamped Distribution Sector Scheme, which is a reforms-based and results-linked scheme with an outlay of Rs 3.04 trillion and a gross budgetary support of Rs 976.31 billion over a period of five years from 2021-22 to 2025-26. The scheme seeks to improve the operational efficiencies and financial sustainability of the discoms by providing financial assistance for strengthening the supply infrastructure, based on pre-qualifying criteria and achievement of basic minimum reform benchmarks.

The scheme aims to reduce AT&C losses to pan-India levels of 12-15 per cent and the ACS-ARR gap to zero by 2024-25. Notably, it allows distribution companies the flexibility to draw up their modernisation plans as per their own specific requirements. The scheme will have two key parts – Part A, comprising metering and distribution infrastructure works, and Part B, comprising training and capacity building as well as other enabling and supporting activities. The key components of Part A include metering, feeder segregation, modernisation of the distribution system in urban areas and system strengthening in both urban and rural areas.

Draft Electricity (Late Payment Surch-arge) amendment Rules, 2021: In August 2021, the Ministry of Power (MoP) notified the draft Electricity (Late Payment Surcharge) Amendment Rules, 2021. The rules propose that generation companies be given an option to sell power to a third party and recover their cost. This will reduce the fixed cost burden on the distribution licensee. All the bills payable by a distribution licensee will be time-tagged with respect to the prescribed date of payment specified in the PPA, and the payment will be made by the distribution licensee first against the oldest procurement of power and so on and so forth.

Privatisation of UTs: In addition to the financial stimulus package, the government made certain key reform announcements under the fourth set of the Covid economic package of the Aatmanirbhar Bharat Abhiyan. These included the privatisation of power distribution in UTs, which would act as a model at the pan-India level. Deloitte has been appointed to help privatise discoms in Puducherry, Chandigarh and the Andaman & Nicobar Islands, while SBI Caps will be assisting in  Dadra & Nagar Haveli, Daman & Diu, Jammu & Kashmir and Ladakh.

Recently, in August 2021, Eminent Electricity Power, subsidiary of CESC Limited, emerged as the highest bidder to take over the Chandigarh Electricity Department’s power distribution business for Rs 8.71 billion. Earlier, in February 2021, Torrent Power had emerged as the highest bidder for acquiring a 51 per cent stake in the discom in Dadra & Nagar Haveli and Daman & Diu. However, in March 2021, the Bombay High Court suspended auction for the same after a public interest litigation was filed against the privatisation of the discom. In July 2021, the Supreme Court of India granted a stay on the impugned interim order of the Bombay Hight Court, suspending the tender process for the privatisation of the power distribution business in both UTs.

Electricity (Rights of Consumers) Rules 2020: In December 2020, the MoP notified the Electricity (Rights of Consumers) Rules, 2020, laying down the minimum standards of service for power supply to consumers across the country. The rules mark a paradigm shift in policy planning in the sector by putting consumers at the centre and are expected to benefit about 300 million existing and prospective consumers. They aim to ensure that new electricity connections, refunds and other services are provided in a time-bound manner, and wilful defaults are penalised.

Other developments: In August 2021, the MoP advised all central ministries and departments to switch to prepaid smart electricity meters. This comes after the Ministry of Finance issued a clarification allowing all central ministries and central departments to make advance payments for prepaid metered electricity without requiring any bank guarantees.

In another development, in May 2021, the MoP asked 18 states and UTs to issue distribution tariff orders for 2021-22, in line with the provisions of the Electricity Act, 2003, at the earliest. The government had asked the state electricity regulatory commissions to issue these tariff orders before April 1 of every year, and report compliance with the union power ministry by May 31. Only 17 states/UTs had issued tariff orders till March 2021 and some of the others are in the process of doing so. Some of the states to which the power ministry has written are Uttar Pradesh, Tamil Nadu, Jharkhand, Uttarakhand, Delhi, Rajasthan, Punjab, West Bengal, Tripura, Madhya Pradesh, Karnataka, Chhattis-garh, Arunachal Pradesh and the UTs of Jammu & Kashmir and Ladakh.

While power distribution is one of the key components of the power sector, it continues to be the weakest link in the supply chain. Distribution utilities are making losses due to expensive long-term power purchase agreements, poor infrastructure and inefficient operations, among others. These losses prevent them from making the investments required to improve the quality of power supply and preparing for the wider penetration of renewable energy.

“The long-standing issues of high AT&C losses, non-cost-reflective tariffs, inherent cost subsidies in tariffs and creation of regulatory assets have been plaguing the distribution sector for long. The fundamental causes behind these issues, in my view, are the continued inefficiency of state discoms with no accountability, lack of private participation, political interference in tariff setting and the inability of regulatory bodies to exercise their powers autonomously,” said Sanjay Kumar Banga, president (T&D), Tata Power Company Limited, in a recent Power Line forum. Distribution utilities’ inability to pay power generators endangers the financial health of the generators as well as their lenders, causing a negative domino effect.

Net, net, the distribution segment is likely to witness a major shift in the coming years with an expected increase in private participation, greater technology adoption, and growth in network infrastructure, thereby benefiting consumers and discoms alike. Apart from this, digitalisation efforts are gaining momentum among discoms, driven to some extent by the Covid-19 pandemic, the evolving load profile and growth in distributed generation.