In line with its strategic objectives of reducing debt, focusing on its core business (steel) and reducing its carbon footprint, Jindal Steel and Power Limited (JSPL) has divested its entire 96.42 per cent stake in Jindal Power Limited (JPL) to Worldone Private Limited. In July 2021, Worldone submitted its initial offer of Rs 74.01 billion for acquiring JSPL’s stake in JPL. Following this, JSPL issued an expression of interest inviting other competitive bids for a fortnight. However, owing to the non-submission of bids from other investors, the company accepted Worldone’s offer on August 7, 2021. Worldone is JSPL’s promoter group company, incorporated in 1999, which holds investments across various listed and unlisted companies.

This offer has two primary components. Of the total amount of Rs 74.01 billion, Rs 30.15 billion will be payable in cash, while the remaining Rs 43.86 billion will be paid through the assumption of liabilities and other debt obligations such as intercorporate deposits, in addition to the takeover of capital advances extended by JSPL to JPL. The deal will enable the offloading of debt associated with JPL (Rs 65.66 billion as of December 31, 2020) from JSPL’s consolidated books, thereby strengthening JSPL’s balance sheet.

JSPL diversified into the power sector via its subsidiary JPL, which developed a coal-based power generation capacity of 1,000 MW (4×250 MW) at the O.P. Jindal Super Thermal Power Station in Tamnar, Chhattisgarh. The project was commissioned in phases in 2007 and 2008. By 2015, it expanded the capacity at Tamnar by another 2,400 MW (4×600 MW), thereby raising its aggregate capacity as an independent power producer to 3,400 MW.

In 2020-21, the project generated 13,065 MUs, an increase of 38 per cent over the 9,461 MUs generated in the previous year (as per the Central Electricity Authority). The plant load factor also improved to 43.87 per cent from 31.68 per cent during the same period. JPL has long-term power purchasing agreements (PPAs) for 870 MW with utilities in Kerala, Tamil Nadu and Chhattisgarh; medium-term PPAs for 420 MW (secured under PFC’s power procurement scheme in 2020); and a non-contracted capacity of about 2,110 MW (see Table 1).

JPL’s turnover has been growing at 10.37 per cent CAGR for the past four years. However, the company’s expenses have been growing at a similar rate since its profits before and after tax have both been regressing (Table 2). JPL’s earnings before interest, taxes, depreciation, and amortisation (EBITDA) account for 10 per cent of JSPL’s consolidated EBITDA; however, JPL accounts for 33 per cent of debt undertaken by JSPL. Taken together, it is clear that JPL’s performance has been weighing down the financial health of its parent entity.

Furthermore, JPL’s loss-making performance is set to continue, much to the detriment of JSPL, given the negative outlook of the power industry, the low plant load factor of JPL’s Tamnar thermal power plant, and the fact that only 26 per cent of the plant capacity has long-term PPAs.

Conversely, JPL’s divestment is expected to yield a positive cash flow of Rs 30 billion for JSPL, which it will utilise to pare its debt and expand its steel capacity. Therefore, the divestment of its coal-powered thermal power business is estimated to enhance its net worth by 20 per cent. This is one of the reasons that motivated JSPL to divest and sell JPL.

In addition, there is an environmental social and governance (ESG) rationale behind the divestment. JSPL is increasingly focusing on reducing its CO2 emissions. The deal will improve its ESG score and cut its carbon footprint by half. This will also open up more avenues for financing its capex plans, given that globally, lenders are averse to funding emission-intensive businesses. Active stake-holding and investment in highly polluting thermal power companies may deter pension funds, sovereign wealth funds and private equities from investing or lending to JSPL for digressing from ESG norms. Therefore, JSPL found it more viable and logical to divest JPL. 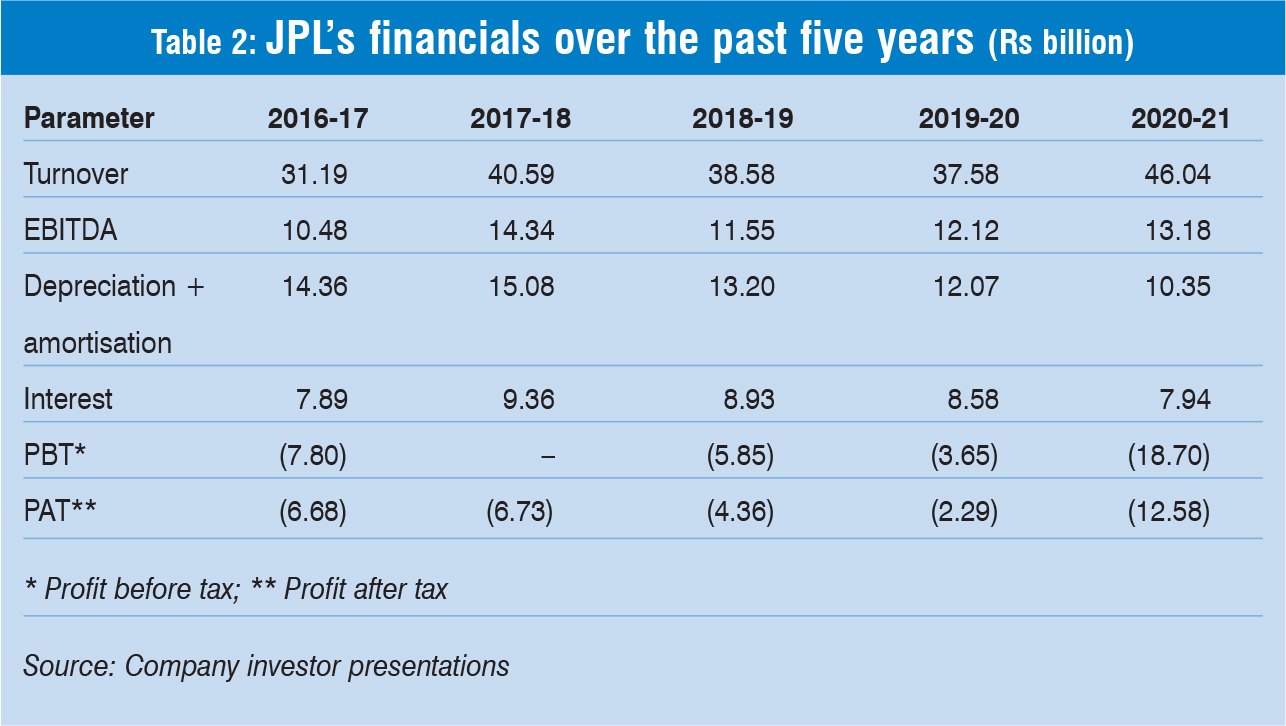 The company has outlined an ambitious vision of 15:15:50, which requires achieving an EBITDA of Rs 150 billion or more, a debt of Rs 150 billion or less, and a consolidated revenue of Rs 500 billion or more. At the end of the fourth quarter of financial year 2021, JSPL reported a net debt of Rs 226.41 billion. With the current divestment deal, it appears to be well on track to achieve its vision of being a net debt-free company.