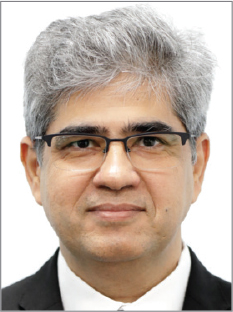 Apraava Energy (formerly CLP India) envisions its energy portfolio doubling over the next three to four years. The company aims to expand its power transmission business and explore new opportunities in the distribution and retail space. Excerpts from a recent interview with Naveen Munjal, director, business development and commercial (conventional), Apraava Energy…

What is the strategy and rationale behind the move to rebrand CLP India as Apraava Energy?

The rebranding of CLP India to Apraava Energy has been on for the past three years. There were three key reasons for this move:

What are the company’s renewed targets and focus areas for the future?

Apraava Energy steps into the future with a vision of creating a diversified business that will help fuel India’s economic grow­th through clean, reliable and affordable energy. Broad­ening its horizons to ex­plore non-generation opportunities, Ap­raava Energy will expand its power tr­ansmission business and ex­plore pot­e­n­­ti­al opportunities in the electricity distribu­tion/re­tail space. As the power sector gets privatised, the company will pro­ac­tively focus on foraying into low-carbon customer-focused energy businesses.

What were some of the significant achie­ve­me­n­t in the past one year or so?

Apraava Energy has recently concluded the acquisition of 49 per cent equity of Kohima-Mariani Transmission Limited (KMTL) from Kalpataru Power Transmis­sion Limited and Techno-Electric and En­gineering Company Limited; the re­ma­i­ning 51 per cent will be acquired as per the terms of the Transmission Service Ag­reement. KMTL owns and operates a 254 km 400 kV double-circuit transmission line along with a substation in the northeastern part of India. This asset has been operational since December 2020.  On the renewables front, our 252 MW Si­dh­pur wind project has progressed into co­ns­truction and is expected to be commissioned in the third quarter of 2022.

What is the company’s existing and upcoming project portfolio across segments?

Our diverse portfolio comprises over 3,000 MW of installed capacity, which consists of about 1,175 MW of wind energy (in­clu­ding the under-construction 252 MW wind project at Sidhpur) and 250 MW of so­lar energy projects across seven Indian states, as well as two power transmission assets. Going ahead, we will only invest in low-carbon growth areas, including renewable energy, power transmission and distribution, as well as other non-generation, customer-focused energy businesses.

What are some of the new initiatives taken/planned by the company?

Apraava Energy is committed to addressing climate-related risks and opportunities. We will set targets for improving ef­fi­ciencies and reducing gr­eenhouse gas emissions. We are proud to announce our formal commitment to the Science Based Targets initiative (SBTi). We are working on a measurable, science-based emissions re­duction objective that will be validated by SBTi by 2022. Apraava Energy has ple­dged to positively impact 2 million lives by 2025 through its community investments. The major focus will be on climate actions, including mass tree plantation, care for biodiversity and clean air through crop residue management initiatives. To date, Apraava En­ergy has issued 13.14 million units of carbon offsets, which equates to the avoidance of 13.14 million tonnes of car­bon dioxide emissions.

What is your outlook for the power sector?

Distribution reforms remain the key concern as financial viability and mo­un­ting debts of state-owned utilities have reached unsustainable levels. We hope that the concerted efforts of the central government yield the desired results. In­tense competition in generation and transmission bidding has im­pac­ted the viability of many projects. As far as equipment is concerned, India has done reasonably well vis-à-vis wind power. The solar industry, however, missed the early bus, with China gaining a dominant share of the global supply. However, recently introduced policies are helping pull some of this demand back to India’s manufacturing

Confronting Climate Change: IPCC report sends out a serious warning, but also a message of hope

The United Nations’ top climate body, the Intergovernmental Panel on Climate Change (IPCC), recently released the second report of its sixth as­sessment, known as AR6. The report follows the first one, published in Au­gu­st 2021, […]

US-based solar module manufacturer First Solar entered the Indian market in 2010 and has since become one of the largest thin-film suppliers in the market. Excerpts from a recent interview with Sujoy Ghosh, country head, […]

The renewable energy sector has grown significantly over the past year on the back of multiple regulatory changes, capacity additions and declining tariffs. As of July 2017, the total renewable energy capacity was 58.9 GW, […]