Taking its clean energy transition goals seriously, the US government is making efforts to provide federal funds for accelerating the growth of the clean electricity and power transmission sectors. To help realise its ambitious climate goal of achieving 80 per cent clean electricity by 2030 and 100 per cent by 2035, the Biden administration has been pushing ahead two pieces of proposed legislation – the $1 trillion bipartisan Infrastru­cture Investment and Jobs Act (IIJA or infrastructure bill) and the $1.75 trillion Build Back Better budget reconciliation bill. While the proposed laws cover a broad spectrum of sectors, they particularly propose an investment of about $38 billion for grid infrastructure and enhan­cements.

On November 5, 2021, the US Congress passed the bipartisan infrastructure bill, which is to be signed by the President be­fore it can become a law. Earlier, on Au­gust 10, 2021, the US Senate passed (69-30) the bipartisan infrastructure bill, which was passed by the House of Rep­resentatives (221-201) in July 2021. The infrastructure bill comprises several authorising bills including the Energy Infrastructure Act, which consists of electricity transmission-related provisions under the head “Grid Infrastruc­ture Re­silience and Reliability”. More than half of the infrastructure bill’s proposed spending or $550 million comprises new federal investment including $65 billion dedicated to power and grids. In particular, it has authorisation of over $28.8 billion to upgrade the power infrastructure, which includes building thousands of miles of new, resilient transmission lines to facilitate the expansion of renewable energy. The plan is touted as the single largest investment in clean energy transmission in American history.

The key highlights of the infrastructure bill with respect to transmission include the expansion of the list of considerati­ons the US Department of Energy (DOE) uses to select and designate National In­te­rest El­ectric Transmission Corridors (NIETCs). The DOE could designate na­tio­nal corridors based on existing and projected congestion and capacity constraints as well as considerations of both energy security and the ability of generators to connect to the grid. Currently, the DOE has the authority to designate such corridors based on existing grid congestion as per the Energy Power Act, 2005. This act gave the Federal Energy Regu­la­tory Commission (FERC) additional permitting powers (backstop siting authority) to ensure timely construction of the transmission infrastructure to resolve congestion in those corridors. However, subsequent rulings by the US Court of Appeals vacated the DOE’s NIETC designations and made the FERC’s backstop siting authority ineffective. Notably, in 2020, DOE’s assessment of transmission congestion concluded that there is no need to designate the NIETC, alluding to the significant inc­rea­se in transmission in­vestment since 2005. However, it stated that future ass­ess­ments should address the grid’s resilience and threats posed by cyberattacks and natural disasters.

Pointedly, the infrastructure bill revives and extends the FERC’s backstop siting au­tho­rity to supersede state regulatory agencies’ decisions withholding or de­ny­ing permits in DOE-designated transmission corridors. Prior to exercising this au­thority, the FERC must consider if the tra­n­s­mission permit applicant has engaged sta­tes and other entities in good faith con­sultations in a timely manner. The overall intention is to overcome state-le­vel permitting challenges and clear the backlog in the generator interconnection queue (currently pegg­ed at over 750 GW including 700 GW of renewable energy), which would facilitate large-scale renewable capacity integration into the grid. Some transmission owners and industry experts have, however, cautioned that this rule could complicate transmission de­velopment as it could lead to further litigation. Further, the bill establishes a $2.5 billion revolving loan fund to allow the DOE to serve as an anchor tenant for new or upgraded transmission lines. As per this provision, the DOE could buy up to 50 per cent of the planned capacity, which it may sell after determining that the project has become financially viable. Some stakeholders have also expressed concern over this provision saying that al­though projects funded through the programme should not conflict with those ev­olving through the regional trans­mission orga­nisation’s planning process, it risks subsidising uneconomical projects. 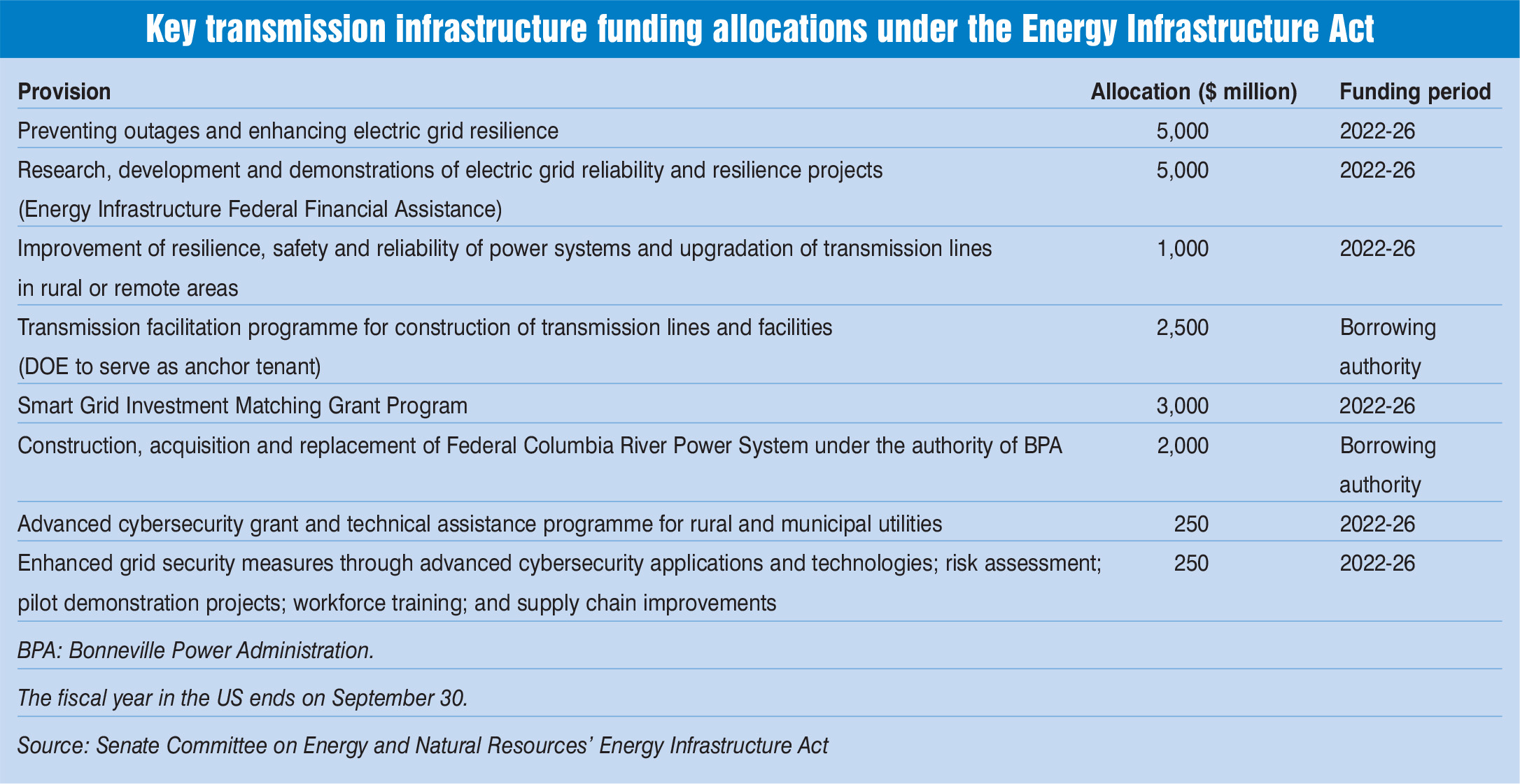 Notably, the US Senate Committee on Energy and Natural Resources-approved version of the bill called for the creation of a new Grid Deployment Authority un­der the purview of the DOE, to fund and facilitate the expansion of key transmission lines faster, by avoiding lengthy per­mitting and siting processes. How­ever, this was dropped in the final text of the bill approved by the Senate.

While siting is a major issue stalling several projects, other issues relating to cost allocation and planning are equally important to advance transmission projects. The FERC is considering these aspects holistically through its recent advanced proposed rule-making on transmission reforms.

Broadly, transmission owners support the infrastructure bill for the backstop siting facility, but are keener to avail the budget reconciliation bill’s clean energy tax credits (worth $320 billion) extended to the transmission sector among ot­h­er clean energy sectors. In terms of the de­velopment on this bill, it will need to pass both the House and the Senate th­­ro­ugh the budget reconciliation pro­ce­ss, before it can be signed by the Pre­si­dent making it a law. It is currently mir­ed in controversy due to the sheer size of the investment involved, which has already been sliced into half from the original $3.5 trillion.

Earlier, on September 14, 2021, the House Committee on Energy and Com­merce approved the Build Back Better Act, which proposes an investment of $9 billion for grid enhancements. The legislation extends grants to assist states in siting transmission projects and funds the DOE’s transmission planning and mo­delling capabilities. It also provides gran­ts and loans for constructing and mo­dernising grid infrastructure across the seams between the eastern and wes­tern interconnections, domestic in­te­rties with the Electric Reliability Co­uncil of Texas and for offshore wind projects. These actions are expected to reduce con­s­umer costs and maintain grid reliability during extreme weather events and are considered essential to address the climate crisis.

Investment in transmission is critical to achieving the US energy transition goals. Stu­dies estimate that the country will need to double or even triple its transmi­ssion capacity to decarbonise its economy by 2050. While it is still early days for the reconciliation bill, the passage of the IIJA is expected to ease the permitting and funding challenges for major transm­ission projects, enabling massive integration of renewable energy into the grid.