With the ongoing energy transition, the energy mix in the power system is undergoing a rapid ch­ange. The increasing percentage of in­termittent and variable energy sources has presented a plethora of technical ch­allenges in secure and stable grid operation such as short-term to long-term ge­neration-demand balancing issues, fre­q­uency stability, voltage stability and demand for higher flexibility.

Essentially, the inertia of a power system is defined as the resistance offered by the system to a change in frequency following a generation-load imbalance. Sin­ce adequate system inertia is critical for power system stability – more preci­sely grid frequency stability – a suffici­ent amount of inertia is necessary for se­cure and stable grid operation.

For the study, POSOCO implemented online inertia estimation in five regional and national grid control centres. The re­port suggests that while the Indian grid does not foresee any major issue due to inertia in the short term, if adequate countermeasures are not put in pla­ce, diminishing system inertia due to high renewable energy targets is likely to influence grid operation and potentially impact the overall grid security of the Indian power system in the future. 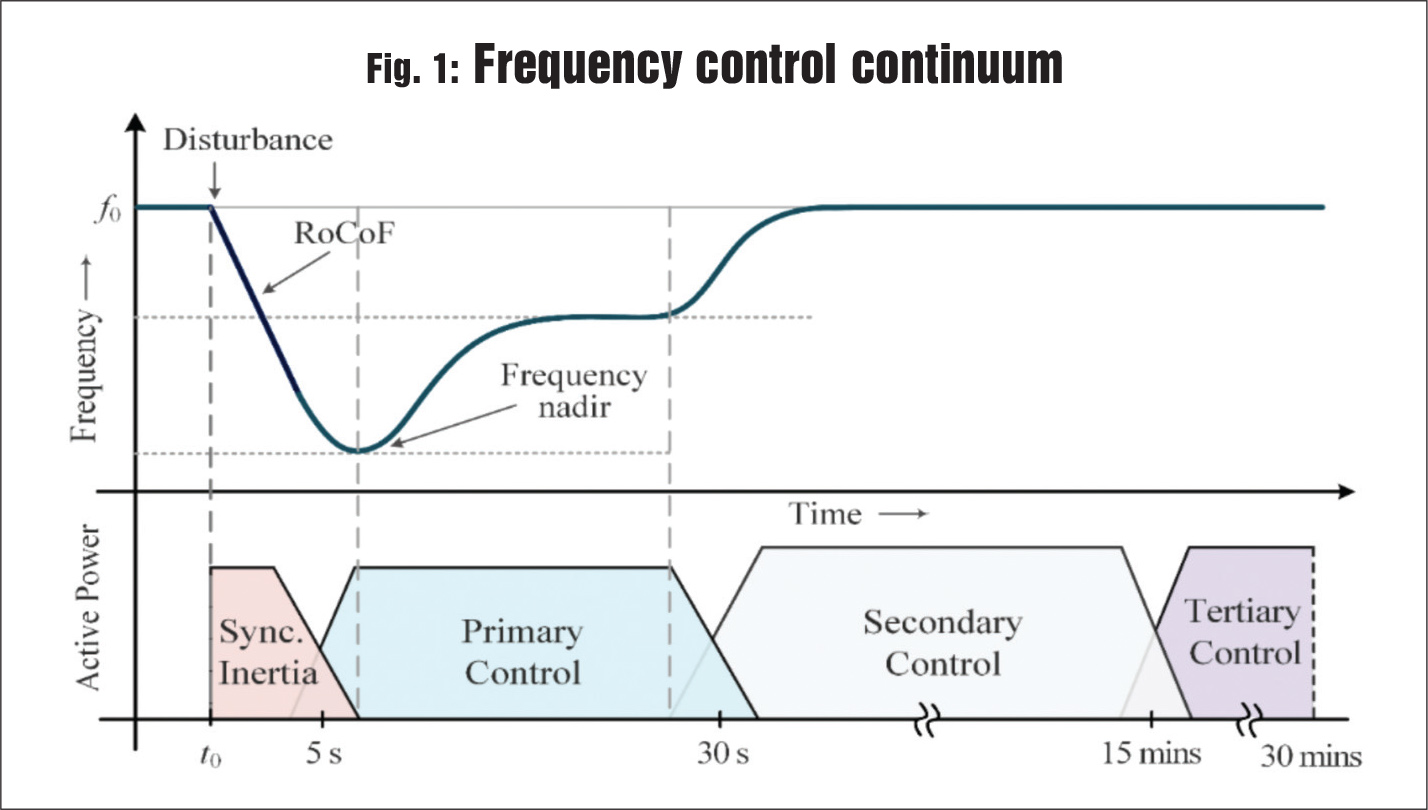 POSOCO’s report, in collaboration with the Indian Institute of Technology, Bom­­bay, documents not only inertia es­timation, but also covers the international practices. As part of the study, the inertia estimation platform monitored inertia from synchronous generators that are observable to the system operator, agg­regate online conventional generation, the number of units synchroni­sed to the grid as well as aggregate on­line renewable energy generation at the national grid level.

Currently, the online inertia platform covers around 1,200 conventional generating units with an aggregate capacity of 336 GVA. The inertia estimation platform monitors the corresponding parameters for their respective regional grids at the regional-level control centres.

The report notes that in a synchronously connected AC grid that has motors synchronised with the grid and a large number of conventional generators, sy­n­chronous inertia plays a critical role. The synchronous inertia assists in limiting the rate of change of frequency (RoCoF) and maintenance of frequency stability, following a sudden change in the generation-load balance, primarily in the first few seconds from the onset of the disturbance. In a conventional large grid, due to a sufficient number of synchronous machines and hence, rotating mass, the lack of adequate system inertia has largely not been a concern.

Global experience suggests that renewable energy integration-driven displacement of conventional synchronous generators has an impact on the rotating mass (inertia) in the system, particularly at higher penetration of renewables. While at the national grid level the system may have adequate aggregate system inertia, it is crucial to maintain sufficient inertia distribution across the regional/state grids. This is because the right balance of inertia across the grid will ensure frequency parameters, particularly maintenance of RoCoF values within acceptable limits, in a different part of the grid.

For the study, inertia estimation analysis of the Indian grid was carried out by POSOCO, using historical events’ data, along with an investigation of its potential impact on RoCoF and under frequency-based protection settings in the Indian grid. Analysing the correlation between renewable energy-driven dimi­ni­shing inertia and various parameters in the Indian grid, the results of the stu­dy suggest that there is a good correlation between inertia and various grid parameters that can further assist in understanding the influence of inertia on grid operation. The study also assess­ed the aggregate frequency response observed in the Indian grid for contingencies. This consisted of generation or load loss of more than 1,000 MW. It was noted that according to continuous follow-up with the utilities for governor testing and tuning as per the Indian Electricity Grid Code, the combined frequency response has improved even though there has been a decline in inertia. 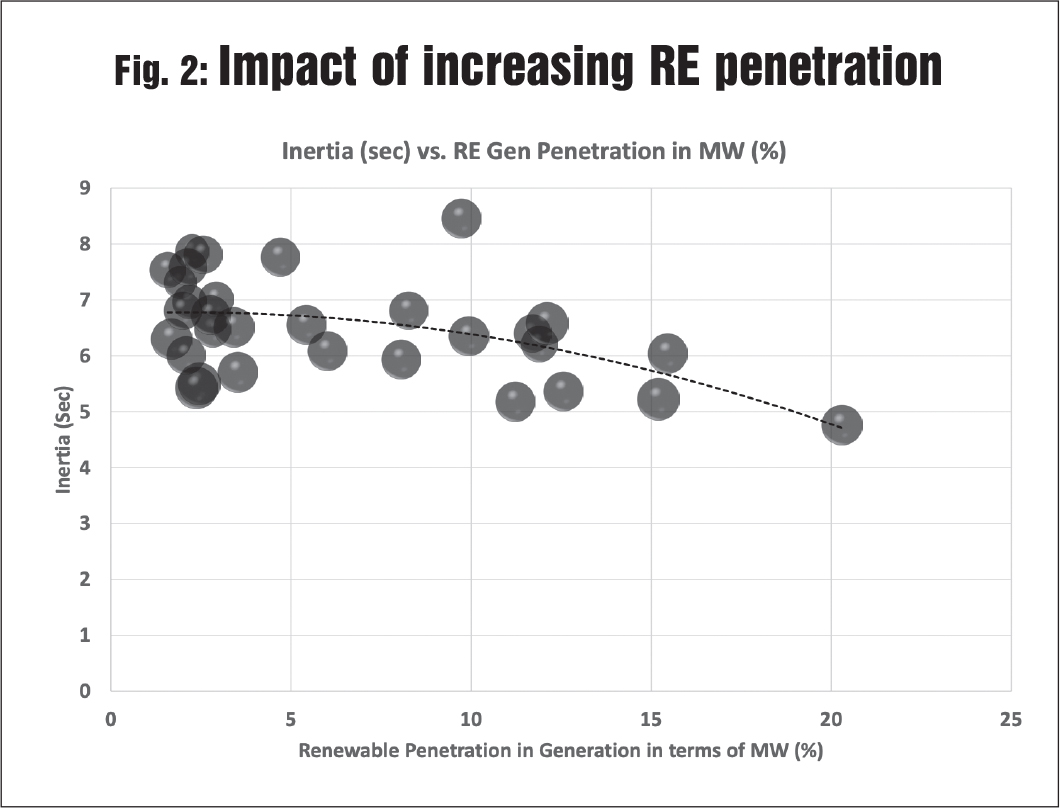 As per the study, the Indian power system inertia varied between 5 and 9 seconds between January 2014 and June 2021, with a mean value of 6.5 seconds. Also, the Indian power system inertia sh­ows a reducing trend, which can be primarily attributed to increase in rene­wable penetration in the system. It was also observed that in some cases, power system inertia is lower in peak hours, while it is higher in off-peak hours. This could be attributed to a higher amount of solar PV generation during peak ho­urs, as well as non-availability of agricultural loads. Also, the increase in frequency response with decreasing inertia and rotating load during frequency events indicated that the combined governor response has im­pro­­v­ed in the system.

An impact analysis of renewable energy penetration on system inertia considering es­timated renewable energy penetration for the year 2022 was also carried out in the re­port. The inertia and kinetic energy trends indicate that there is a declining trend in sy­­­nchronous inertia and ro­ta­ting mass (kinetic energy) for higher renewable energy penetration scenarios. The report also looked at the impact of Covid-19 on Inertia of the Indian Power System and observed that the overall system inertia of the system reduced to 7.22 seconds during the lockdown period, while the corresponding va­lue for power number reduced to ar­ound 7,500 MW per Hz. Due to the lower overall demand and to maintain the load-generation portfolio, a large number of synchronous generators were taken off-line. The loss of online synchronous generation has had a significant impact on the overall inertia of the Indian power system and the associated RoCoF.

At the policy and planning level, the POSOCO study notes that the planning and operation of the future Indian grid (say beyond 2027) must consider the system inertia as a critical parameter, keeping in mind the high penetration of non-synchronous generating resources. Besides provisions for synthetic inertia to be provided by non-synchronous re­so­urces, various policy initiatives for en­couraging the deployment of synchronous inertia sources are imperative, in order to ensure the adequacy of system inertia, it states.

POSOCO also states that there is a need to focus on suitable regulatory provisions and mechanisms that will en­cou­rage frequency response from demand-side re­so­urces, including behi­nd-the-me­ter generation. At the technical level, along with exploring various tools for inertia estimation, online measurement and forecasting, standardising the time window for RoCoF measurement and RoCoF limits for various protection schemes should also be done. Further, as per the report, a joint effort may be undertaken for revision/modification of the grid code regulations/technical standards in order to incorporate related technical definitions, to ensure standardisation of RoCoF measurements, for providing inertial re­sponse control capability from inverter-based resources (IBRs), to focus on inertia estimation/measurement/forecast and new (voluntary) frequency support ancillary service products, such as fast frequency response.

Apart from this, the provision of inertial response capability from IBRs should be explored and potentially introduced in grid code regulations. Since RoCoF values ex­perienced by the system for a gi­ven con­tingency vary across the system de­p­ending on the location of the con­tinge­ncy and inertia in the nearby area, the ri­ght balance of spatial distribution of inertia among different regio­nal grids/ frequency control areas shou­ld be ensur­ed. To achieve the afore­me­n­­tioned targe­ts, a framework for peri­o­d­ic revision of such limits due to inc­reased renewable en­ergy penetration should not only be adopted but implemented effectively in the Indian grid. For the next decade and beyond, stationary, and particularly mo­bile storage facilities, are expected to inc­rease significantly.

Overall, POSOCO recomme­nds that maintaining power system inertia adequacy be included in the overall planning of system security. This would be feasible and achievable with coordinated efforts from various system regulators, state and national system operators and discoms as the country looks forward to renewable energy targets in the