Over the next five years, the utility’s focus will be on strengthening the transmission and transformation network, and improving load management and storage capacity to enhance the adaptability of power systems when new generation sources are added to the grid. Further, owing to its commitments to the Paris Agreement to ensure energy transition, CSG has been paying considerable attention to the development of energy storage, electric vehicles and offshore wind. Another focus area for investments has been digital infrastructure and smart grids.

CGS is responsible for investing, building, operating and managing the power grid in the provinces of Guangdong, Gu­an­gxi, Yunnan, Guizhou and Hainan. The company also participates in the operation of related cross-regional po­wer transmission, transformation and interconnection projects, and guarantees power supply in the five provinces, along with the special administrative regions (SARs) of Hong Kong and Macao.

The utility has been focusing on en­hancing the energy supply structure and network to cater to the needs of the load centres, and is developing a clean, low-carbon, safe and efficient energy supply system. With respect to the direct current (DC) grid, the focus has been on developing ±1,100 kV and ±800 kV DC projects. At present, CSG has commissioned eight alternating current (AC) and 11 DC projects to strengthen west-east power transmission.

During 2016-20, CSG invested CNY 511 billion in grid enhancement. The core focus of the utility has been on revamping and modernising the transmission and distribution (T&D) network for the growing share of renewable generation in the grid, which accounted for 53.2 per cent of the electricity in the country’s network, with a further focus on increasing the percentage of non-fossil energy power generation in its network to 60 per cent by 2025.

The investments have led to a steady growth in the utility’s transmission network. The line length has grown at a com­pound annual growth rate (CAGR) of 3.56 per cent, going from 208,438 km in 2016 to 248,000 in 2020. In 2020, CSG operationalised the ±800 kV Wudongde transmission project, which spans 16 cities in southern China and will help improve power supply in the Guang­do­ng-Hong Kong-Macao Greater Bay Area. The transformer capacity has also inc­reased considerably, exhibiting a CAGR of 5.08 per cent during the same period.

The country’s efforts to expand its power grid via ultra-high voltage (UHV) AC and DC transmission is being supported by strong cooperation among the Chinese provinces. Several cooperation agreements have been signed between pro­vincial governments to enable the sm­ooth construction and commissioning of transmission projects that span different provinces. 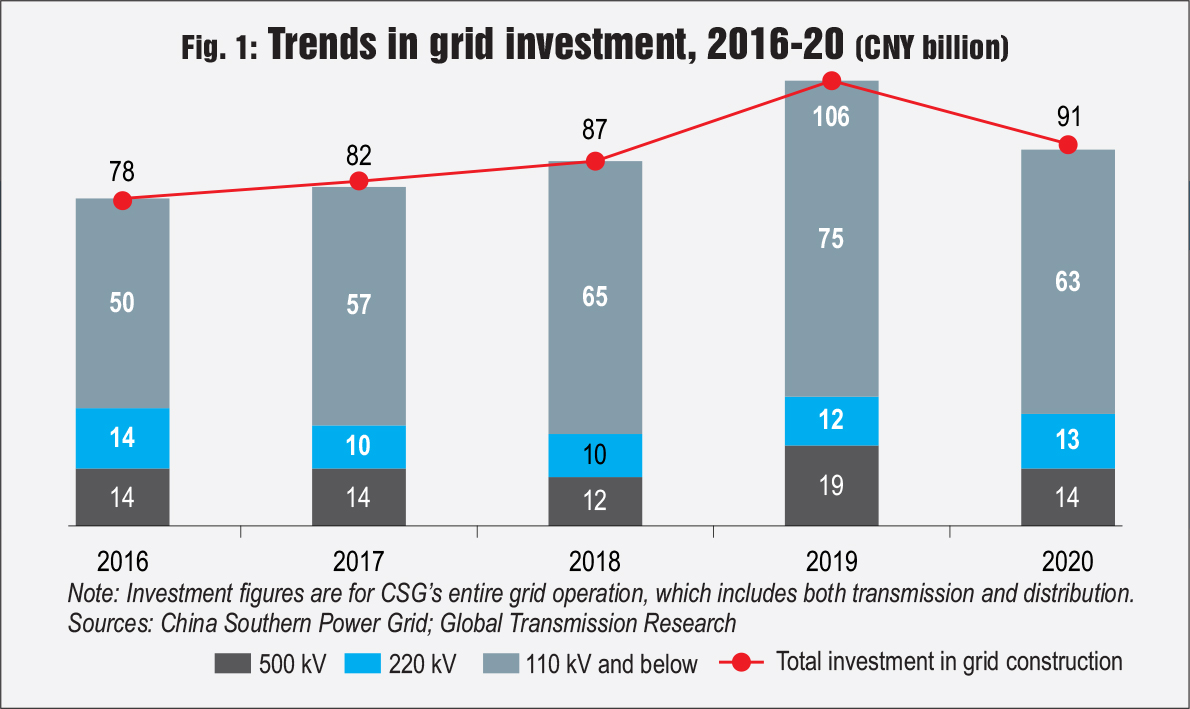 CSG plans to invest CNY 670 billion by 2025 to improve its power system. The utility has recently formulated its 14th five-year network development plan, which focuses on improving the overall architecture of the grid to support upcoming clean energy. The utility plans to spend CNY 320 billion on up­grading the distribution network and the remaining amount on developing clean transmission and energy storage infrastructure.

According to estimates, by 2025, the total electricity load of the five southern pro­vinces and the two SARs will reach 295 GWh, an increase of 79.6 GWh from 2020.

The utility will invest in the development and upgrade of its grid network to meet the forecasted demand. CSG will continue to focus on the development of west to east electricity transmission projects while expanding the north to south and Tibetan southeast channels to en­sure optimal use of resources on a grea­ter scale, including Guangdong, Hong Kong, Macao and Southeast Asia.

The utility will develop more voltage source converter-based high voltage di­rect current systems and renew the existing DC projects to ensure that the main grid is evenly distributed, so all the electrical resources are available when and where they are needed.

During the 14th five-year plan period, seven UHV DC lines will be built, with an additional power transmission capa­city of 56 GW. Another key element of CSG’s investment plan is building electric power distribution networks with an expected investment of CNY 320 billion, accounting for almost half of the total planned five-year investment. CSG will continue accelerating the construction of new power distribution networks in urban areas.

Furthermore, CSG is expected to make substantial improvements to rural power grids and make contributions to national new urbanisation and revitalisation stra­tegies. As part of the company’s ongoing efforts to make its power distribution network more intelligent, it plans to install po­wer distribution demonstration zones in rural districts and counties.

In terms of technological intervention in the grid, inspection robots and artificial intelligence-driven substations will be set up to increase the efficacy of the grid. It is expected that by 2025, inspection drones will be used for every transmission line at 35 kV and above.

Furthermore, CSG is expected to lead the way in the development of integrated in­frastructure with its integration of the substation, the charging and switching station, the energy storage station, the data centre, the 5G base station, and the Beidou base station (a navigation satellite system, wherein the base station will be connected with Beidou satellites in real time and provide precision satellite services). By 2025, there will be 100 integrated substations and several demonstration zones of smart energy consumption in Guangzhou (Nansha district), Zhuhai (He­ngqin district) and Dongguan (Son­gshan lake).

As part of the grid investment plan, CSG plans to integrate an additional 115 GW of wind power and photovoltaic (PV) solar power, 6 GW of pumped storage, and 20 GW of energy storage into its grid network by 2025. At the end of the 14th five-year plan, the total installed ca­pacity of the region is expected to inc­rea­se to 610 GW. Meanwhile, the share of non-fossil energy in installed capacity and power generation will increase to 60 per cent and 57 per cent respectively.

CSG is investing heavily in new grid technologies and network upgrades to create a resilient and smart network. The focus on creating a clean and smart grid is at the centre of CSG’s ambitious in­ve­stment plans and heralds a promising future for grid development in southern China in the coming years.