The California Independent System Operator (CAISO) is the largest ISO among 38 balancing authorities in the western interconnection, handling over two-thirds of the electric load in the west. In collaboration with the Califor­nia Public Utilities Commission (CPUC) and the California Energy Commission (CEC), CAISO recently published its first-ever draft 20-Year Transmission Ou­t­look, with a focus on providing a long­er-term view of transmission to reliably meet the states clean energy goals. Cali­fornia’s 100 Percent Clean Energy Act of 2018 or Senate Bill 100 (SB 100) calls for a switch to carbon-free electricity by 2045, in addition to accelerated integration of new renewable electricity resour­ces into the grid. It also aims to ensure at least 60 per cent of California’s electricity is renewables based by 2030.

The draft develops a long-range blueprint of the interconnected high voltage wires required to meet the aforementi­oned goals. The draft was developed in parallel with CAISO’s customary annual 10-year transmission planning process (TPP). The draft outlook was open to stakeholder feedback until February 22, 2022 and will be finalised in March 2022 in parallel with CAISO’s 2022-23 Trans­mis­­sion Plan.

The draft outlook envisages an invest­me­nt of $30.5 billion in transmission, with over 65 per cent ($19.76 billion) being allocated to the integration of offshore wind as well as out-of-state wind. The re­maining will be invested in up­grading the existing transmission infrastructure.

CAISO manages the flow of electricity ac­ross high voltage, long distance power lines serving 80 per cent of California and a small part of Nevada. As the only in­dependent grid operator in western US, it provides equal access to rou­g­hly 26,000 circuit miles (41,843 km) of transmission lines, and coordinates com­peting and diverse energy resources into the grid. The transmission network under its jurisdiction operates across several voltages, including 70 kV, 115 kV, 230 kV and 500 kV. Three investor-owned utilities (IOUs) fall under CAISO’s jurisdiction – Pacific Gas & Electric (PG&E), Southern California Edison (SCE) and San Diego Gas and Electric.

CAISO has witnessed an increase in demand for new transmission, particularly over the past couple of years. For instance, while the 2020-21 transmissi­on plan was based on a 10-year projection of adding 1 GW of capacity annually, the 2021-22 plan is based on a projection of adding 2.7 GW per year, and current dra­fts being proposed for the 2022-23 plan call for additions of over 4 GW per year. The accelerating resource re­qu­irements over the next 10 years are driven by several circumstances, including the need to decarbonise the electricity grid; the ex­pected electrification of transportation and other carbon-emitting industries driving up electricity de­mand forecasts; issues related to redu­ced access to imports as neighbouring systems also decarbonise; higher-than-anticipated im­­pact of shift in peak loads due to inc­rea­s­ed solar penetration; and the need to maintain system reliability in light of reti­ring gas-fired generation and the Diablo Canyon nuclear power plant. In addition to solar power and ba­tt­ery storage, reso­ur­­ces including geothermal, offshore wind and out-of-state wind are expected to play a greater role and create unique challenges in planning and interconnection processes. Addressing these challe­nges will require adaptations and en­h­an­cements in existing processes and efforts. Currently, 605 projects aggregating 236,225 MW are in CAISO’s interconnection pipeline. This level of hypercompetition hinders the integration of re­so­urces that must be added to the grid and thus imposes grea­t­er pressure on the re­sour­ces of ISO and transmission owners. 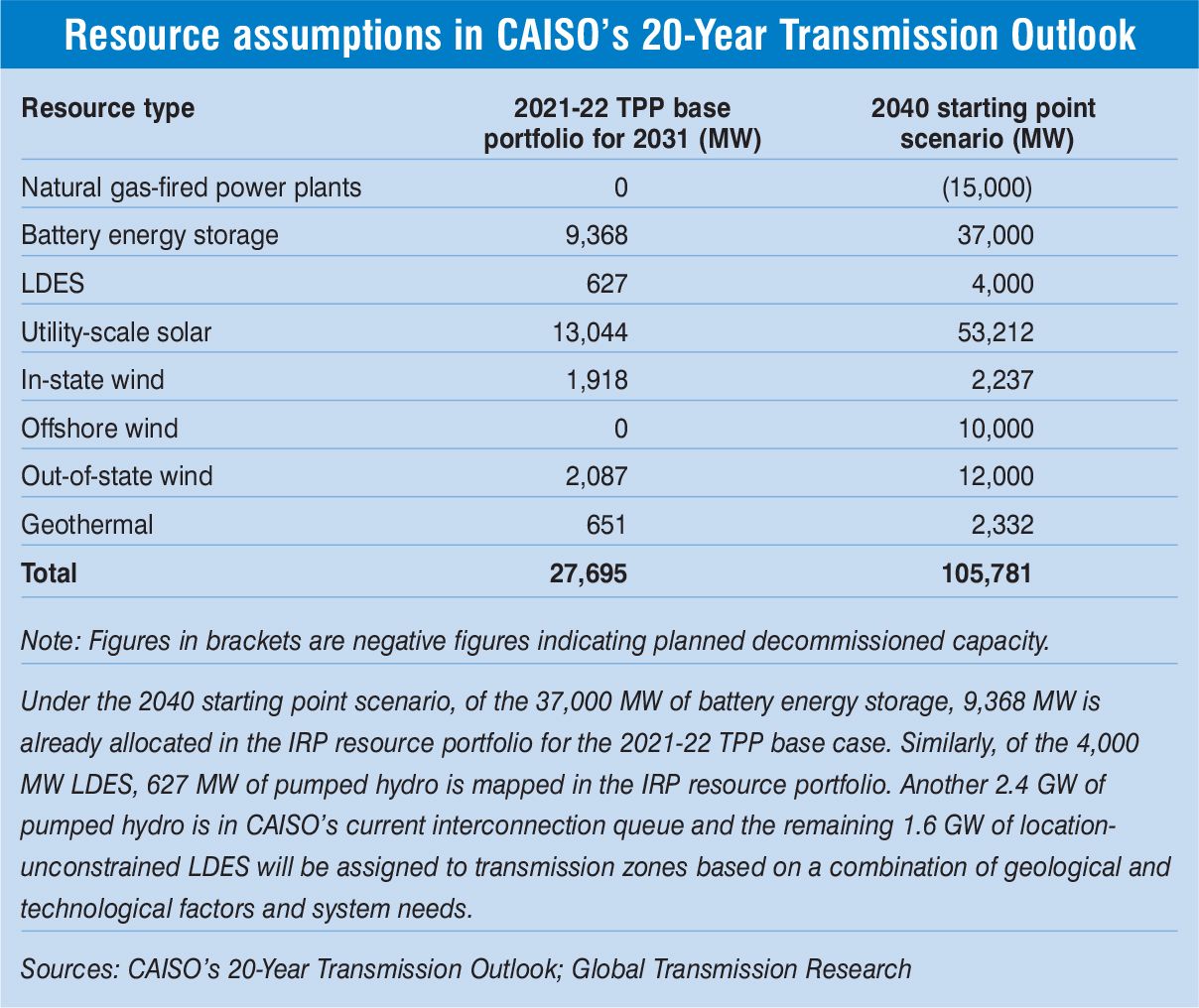 The draft 20-Year Transmission Outlook provides the baseline architecture for future planning activities. It includes hi­gh-level technical studies to test the feasibility of alternatives, focusing on the bulk transmission system.

The report uses a starting point scena­rio, which is based on the 2021 SB 100 Jo­int Agency Report (2021 SB 100 Re­port) published jointly by CEC, CPUC and the California Air Resources Board (CARB) in line with the SB 100 mandate. CAISO coordinated with the joint agencies on the next steps to plan for the SB 100-driven resource build that has been used as input for the outlook. This inclu­d­ed workshops on potential transmissi­on projects and resource mapping. 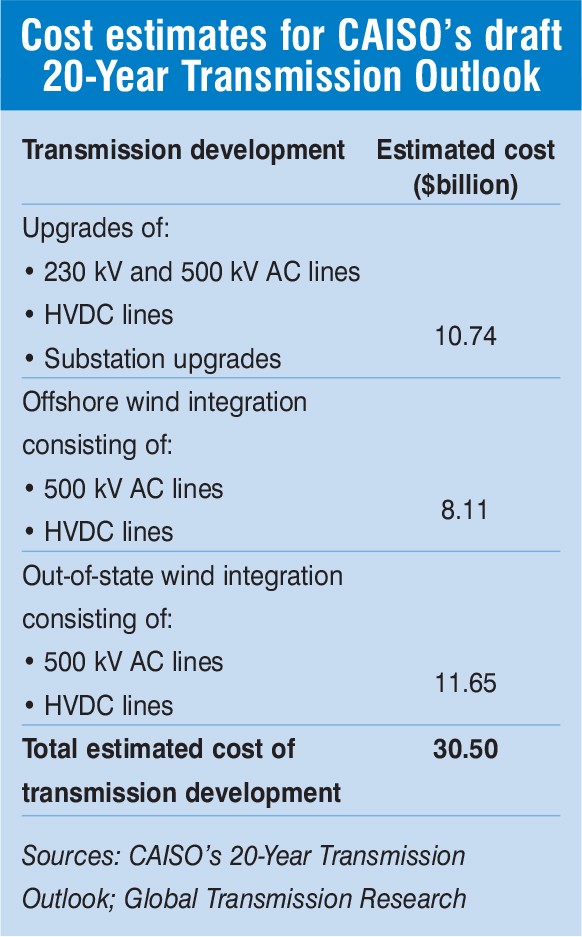 On the demand side, CAISO started with the SB 100 Core state-wide high electrification load projection, in which the 2040 peak load is 82,364 MW. This represents a 28.5 per cent increase from CEC’s Integrated Energy Policy Report 2020 load forecast of 64,076 MW in 2031. The load to be served by the system was ag­ain lowered by the forecast of behind-the-meter resources.

Under the 2040 starting point scenario, of the 37,000 MW of battery energy storage, 9,368 MW is already allocated in the integrated resource planning (IRP) resource portfolio for the 2021-22 TPP base case. Similarly, of the 4,000 MW LDES, 627 MW of pumped hydro is mapped in the IRP resource portfolio. Another 2.4 GW of pumped hydro is in CAISO’s current interconnection queue and the remaining 1.6 GW of location-unconstrained LDES will be assigned to transmission zones based on a combination of geological and technological factors and system needs.  The resulting transmission plan calls for significant 500 kV AC and high voltage direct current (HVDC) development to access offshore wind and out-of-state wind, and reinforce the existing CAISO footprint. The accompanying figure represents the transmission development required to integrate the resources of the SB100 starting point scenario and high electrification load projection by 2040.

According to the outlook, 10 GW of offshore wind will be developed in Cali­fornia including 6,000 MW in the Dia­blo Canyon and Morro Bay call ar­eas on the central coast and 4,000 MW in the Hu­m­boldt call areas on the north coast. The offshore wind resources on the north coast will require significant 500 kV HVDC facilities to interconnect to CAISO’s existing 500 kV system. CAISO has identified the need for two 500 kV AC lines connecting to the 500 kV Fern Road substation and an HVDC line to the 500/230 kV Collinsville substation. An­other alternative considered in CAISO’s 2021-22 TPP is an HVDC-voltage source converter (VSC) deep sea ca­ble to a new Bay Hub station located in the Greater Bay Area. The ce­ntral co­ast offshore wind capacity will be interconnected to the existing 500 kV Diablo substation and a new 500 kV Morro Bay substation looping in the existing 500 kV Diablo-Gates line.

To interconnect out-of-state wind to the CAISO grid, the draft has identified new transmission to link 9,900 MW of capacity from Wyoming (4,685 MW) and New Mexico (5,215 MW). Further, another 2,100 MW from the northwest (1,500 MW) and Baja California (600 MW) will be connected to existing transmission. So­me of the identified transmission projects are Southwest Intertie Project-No­rth (SWIP-North), Cross-Tie, Robin­son-Eldorado, TransWest Express, and additional transmission for additional wind resources from the Wyoming/Idaho and New Mexico areas. 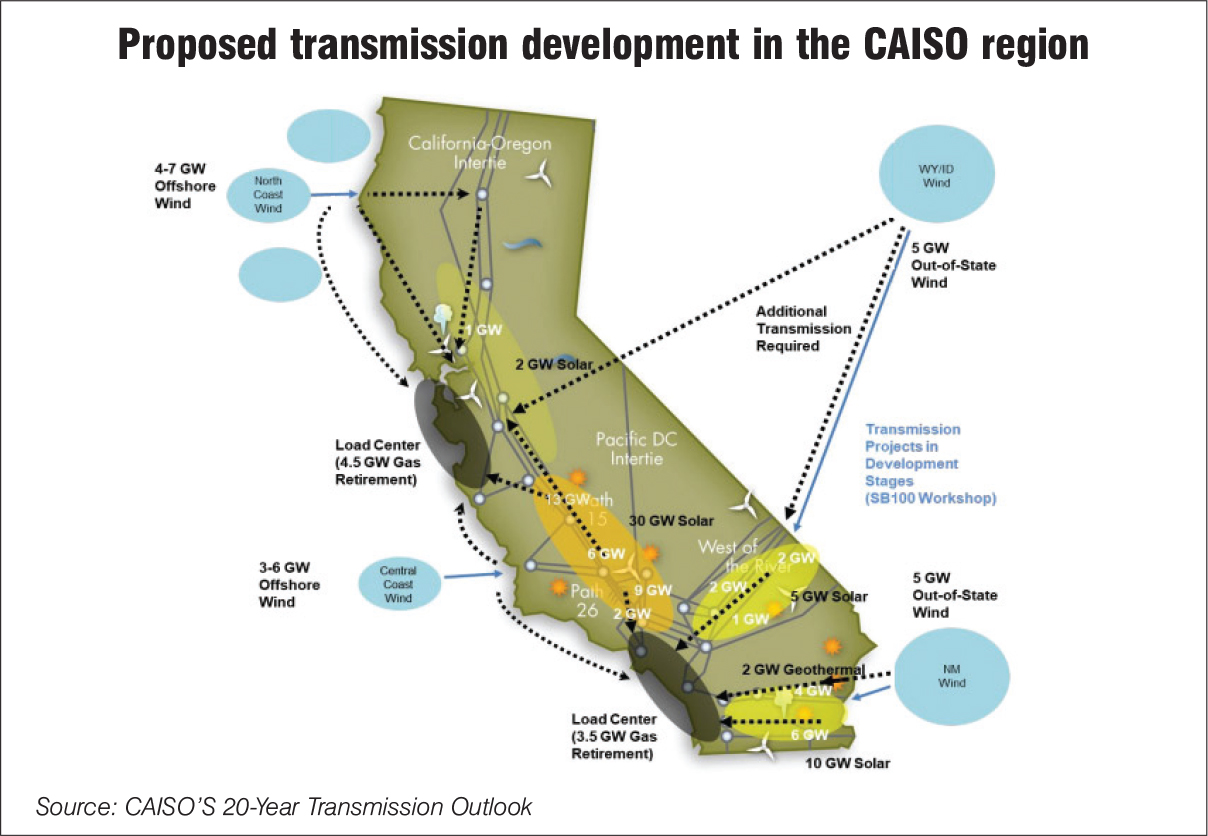 CAISO has planned upgrades of 14 existing transmission projects at an in­vestment of $10.74 billion. The majority of these lines are at 500 kV and represent a total line length of 1,558 km. The key upgrade projects are the Eldora­do–Lugo line, the Colorado Riv­er-Devers line, the Second Los Banos– Tracy line, the Ma­nning-Moss Landing line, the Dia­blo- North HVDC project, the Diablo-South HVDC project and the 500/230 kV Ro­und Mountain and Lugo transformers. The key developers include SCE, DCR Tra­ns­mission LLC and the Duke-Ame­rican Trans­mission Company.

The cost estimate of transmission development to integrate the resources in the SB 100 starting point scenario has been identified at $30.5 billion.

In a bid to explore the longer-term grid requirements and options to achieve the state’s 2045 objectives, CAISO’s draft 20-Year Transmission Outlook has identified the system needs by mapping re­sources aggregating 120.8 GW to the appropriate regions as well as the transmission additions necessary to add those resources to the grid. It has also examined the need to deliver those resources over the bulk transmission system.

CAISO’s outlook is intended to help scope the challenges faced by the ISO, further refine resource planning for the state, and provide a longer-term context for de­cision-making in the 10-year TPP. Essen­tially, it provides a long-term conceptual plan of the transmission grid in 20 years and forms the basis for further dialogue. After finalising this draft in March 2022, CAISO intends to continue the discussion on the findings in the ongoing SB 100 processes; collect input on issues and parameters that could be considered and refined in a future outlook development cycle; provide an update on the 20-year outlook activities; and communicate intentions go­ing forward by the end of 2022.

The state is looking at exciting times ahead as it aligns its transmission planning and development to meet the re­quirements posed by California’s ambitious climate and energy goals.

Incorporated in 2004, Odisha Power Transmission Company Limited (OPTCL) is one of the largest state-owned transmission utilities in the country. It commenced commercial operations in 2005-06 and is a deemed transmission licensee under the provisions […]

Transmission Corporation of Telangana Limited (TSTransco), the country’s newest state transmission utility established in May 2014, is taking several initiatives to expand its network. These steps are key to ensuring timely evacuation of over 16 […]

Interview with Sunil Wadhwa: “The future of the T&D market in India is promising”

GE T&D India Limited is one of the key equipment manufacturers, having contributed significantly to the modernisation of the power sector in the country. It played a major role in the development of power transmission […]