SJVN Limited has embarked on a path of accelerated generation ca­p­acity addition, which comes with significant funding needs. The public se­c­tor company, which currently has a capacity of 2,016 MW, recently announ­ced its targets of reaching 5,000 MW by 2023, 25,000 MW by 2030, and 50,000 MW by 2040. SJVN’s overall capex is expected to reach Rs 55 billion in 2021-22. The company crossed the capex utili­sa­tion target of Rs 50 billion for the on­going fiscal year in February 2022. Its overall capex target for the next fiscal year is Rs 80 billion, spread across 10 un­der-construction projects aggregating 3,500 MW of capacity. These projects in­clu­de the 1,320 MW Buxar thermal po­wer project in Bihar, the 900 MW Arun-3 hydroelectric project (HEP) and the 217 km long Arun-3 transmission line in Nepal, the 600 MW Kholongchuu HEP in Bhutan, the 210 MW Luhri-1 HEP and the 66 MW Dhaulasidh HEP in Himachal Pradesh, the 60 MW Naitwar Mori HEP and the 37 km long Naitwar Mori transmission line in Uttarakhand, and two solar projects at Bagodara and Parashan. In an official press release, N.L. Sharma, chairman and managing director, SJVN, remarked, “In our history of 33 years, we never had so many projects in the construction stage at any given time. New vistas and business opportunities are opening for the company, which proves that our recently re-engineered business model is working well.” 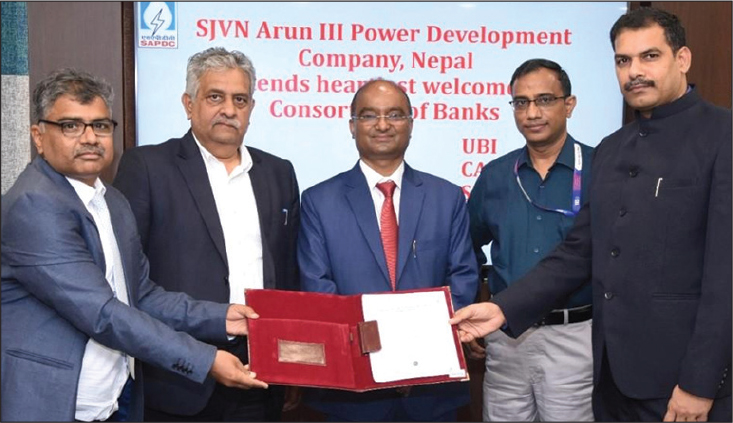 One of SJVN’s flagship projects is the 900 MW Arun-3 HEP, which is the largest India-backed project in Nepal, entailing an investment of nearly Rs 70 billion. Construction of the project is progressing rapidly with the aim of commissioning it by 2023-24. In February 2022, SJVN’s subsidiary, SJVN Arun-3 Power De­velopment Company (SAPDC), sign­ed term loan documents for the drawal of a Rs 63.33 billion loan for the project from a consortium of banks in India and Nepal. The consortium was led by the State Bank of India (SBI) and Punjab National Bank (PNB). The project had achieved financial closure in February 2020 when SAPDC signed an agreement with leading Indian and Nepali banks. Five Indian banks – SBI, Export-Import Bank of India, PNB, Canara Bank and Union Bank of India – and two Ne­pali banks, Everest Bank and Nabil Bank, have agreed to issue credit worth Rs 63.33 billion (approximately NPR 101.34 billion) to SAPDC, of which 85 per cent will be lent by Indian banks.

The Arun-3 HEP was awarded to SJVN by the Government of Nepal on a build-own-operate-transfer basis and a 30-year MoU was signed on March 2, 2008. The project has a construction period of five years from the date of financial closure and an operation period of 25 years. It will provide 21.9 per cent of free power to Nepal during the concession period. The Indian government has accorded investment approval for the generation component of the project at an estimated cost of Rs 57.24 billion (at the May 2015 price level) with a levellised tariff at Rs 3.30 per unit at the busbar, while the investment for the transmission component is estimated at Rs 12.36 billion.

The project involves the construction of a 70 metre high concrete gravity dam, a water conductor system with an 11.74 km long headrace tunnel (HRT), and an underground powerhouse on the left bank of the river with four 225 MW Fran­cis turbines operating under a net head of 308 metres. The contract for the main project work was awarded to Patel En­gineering, while the contract for the hydro-mechanical works was awarded to Om Metals. The electromechanical works, including design, engineering, manufacturing and supply of the Francis turbines, as well as the commissioning of the project, will be carried out by Bharat Heavy Electricals Limited.

The project’s power evacuation system consists of a 310 km long 400 kV DC transmission line from the project area in Diding in Nepal through Dhalkebar to Muzaffarpur, India. Recently, the substation in India was shifted to Sitamarhi. Out of the total line length, about 217 km lies in Nepal, stretching from the Ar­un-3 powerhouse in Diding to Bathnaha at the Nepal border. The line is being constructed by SAPDC and an MoU has been signed with the Power Grid Corpo­ra­tion of India for project management consultancy during the execution of the project in Nepal.

The Arun-3 HEP is at an advanced stage of construction and is expected to be completed a year ahead of the scheduled commissioning date in February 2025. Although the project works were af­fected due to the Covid outbreak, SJVN has implemented an accelerated plan for the project. The 2021-22 capex target for the project was Rs 12 billion for the construction as well as the generation and transmission components, of which Rs 10 billion has already been spent as of February 2022. The 2022-23 capex target for the project is about Rs 21 billion. Given SJVN’s track record of setting up generation projects, this project is expected to be commissioned within the intended timelines, further strengthening Indo-Nepal bilateral cooperation.