This expansion of the transmission grid has facilitated seamless transfer of electricity from power-surplus regions to po­w­er-deficit regions, thereby optimising the use of generation resources as well as meeting the demands of end consu­mers. Now, the segment is set for another phase of accelerated growth, primarily driven by the need to evacuate large-scale rene­wables. With India targeting to meet 50 per cent of its energy needs from renewables and achieve 500 GW of non-fossil fuel capacity by 2030 as an­nounced at COP26, significant expansi­on and streng­thening of the interstate transmission system (ISTS) will be re­qu­ired. Simulta­neously, the state utilities are expected to take measures to upgra­de and augment intra-state transmissi­on as well as sub-transmission networ­ks. Power Line takes a look at the key tr­en­ds and developments in the power transmission segment…

The central government has undertaken many progressive policy and reform initiatives for the transmission segment in recent months. One of the most significant is the introduction of general network access (GNA) under the Electricity (Transmission System Planning, Deve­lop­ment and Recovery of Inter-State Tra­nsmission Charges) Rules, 2021, which were released in a gazette notification dated October 1, 2021. The latest rules define GNA as non-discriminatory acce­ss to the ISTS, as requested by a designa­ted interstate customer and granted by the central transmission utility (CTU) for a maximum injection or drawal in mega­watts and for a specific period. A transition to GNA would provide the much-needed flexibility to state entities in purchasing electricity under contracts of va­rying durations without the limitations of ISTS network availability. For generators too, there will be enhanced flexibility in sales since target beneficiaries will not have to be specified.

In October again, the Ministry of Power (MoP) revised the terms of reference of the National Committee on Transmi­s­sion (NCT) to fast-track the process of ISTS de­velopment. Earlier, all ISTS projects were approved by the MoP based on the NCT’s recommendations. Now, the ministry will only look at ISTS projects costing over Rs 5 billion while ISTS projects up to Rs 1 billion will be app­roved by the CTU and those between Rs 1 billion and Rs 5 billion will be appro­ved by the NCT. Further, in order to en­courage private participation in transmission, the MoP released revised standard bid docume­nts (SBDs) for tendering of projects via tariff-based competitive bidding (TBCB) in August 2021. The last SBDs were is­s­ued in 2008 and there was a strong need to revise them in line with latest developments in the segment. Some of the key changes in the revised SBDs include signing of the transmission service ag­ree­ment with the CTU instead of long-term transmission customers, provisions for an independent engineer during the construction phase and pre­paration of transmission line route survey in ad­van­ce, and a reduction in timeline of the bidding process to 91 days from 145 days.

Other important policy initiatives inclu­de separation of the CTU from Power Grid Corporation of India Limited (Po­wergrid) to provide transparency and a level playing field in TBCB; a reduction in the lock-in period for transmission projects in order to attract investments and more competition; proposal to br­ing all 33 kV systems, which are currently maintained by state discoms, under STUs for better upkeep, and an extension of the ISTS charges waiver on solar and wind energy projects commissioned up to June 30, 2025. Another important development in the segment was the launch of the initial pu­blic offering of the Powergrid Infra­struc­ture Investment Trust, the maiden infrastructure investment trust of Power­grid, in April 2021, marking the beginning of its asset monetisation drive. The Rs 77.35 billion public issue was oversubscribed nearly 4.83 times, having received bids for 2.05 billion units against an offer size of 425.4 million units. The National Monetisa­tion Pipeline has set a target of monetising Powergrid’s transmission as­sets worth Rs 452 billion between 2021-22 and 2024-25.

The Green Energy Corridors (GEC), initiated in 2015, is a key programme for re­newable energy evacuation in the country. Under GEC Phase I, 3,200 ckt km of interstate transmission lines and 17,000 MVA of substation capacity have been co­mmissioned. At the intra-state level, GEC Phase I targets an addition of 9,700 ckt km of transmission lines and 22,600 MVA of substation capacity with completion in 2022. Recently, the central go­vernment approved the GEC Phase II programme for intra-state transmission systems. Under this phase, projects wo­u­ld be set up in seven states – Gujarat, Hima­chal Pradesh, Karnataka, Kerala, Rajas­than, Tamil Nadu and Uttar Pra­desh – for evacuation of about 20 GW of renewable energy. In addition, under the Transmission Sc­he­me for Renewable Energy Zones (REZs), evacuation infrastructure for ab­out 66.5 GW of renewable energy capacity (50 GW solar and 16.5 GW wind) is be­ing created with an investment of Rs 432 billion. Another key initiative is the “One Sun One World One Grid” (OSOWOG) that envisions solar energy supply across borders. Re­cently, on the sidelines of the COP26 su­mmit at Glasgow in November 2021, the UK and India agreed to combine forces of the Green Grids Initiative and the OSOWOG initiative.

As of January 2022, 60 ISTS projects have been bid out to public and private players since 2009. This excludes four projects which have been cancelled or are under litigation. Of these 60 projects, while 20 pro­jects were secured by Powergrid, 40 have been won by private players. Key pri­vate players in the segment include Sterlite Power (16 projects) and Adani Tra­­ns­­mi­ssion Limited (ATL) (14 projects).

In Dec­em­ber 2021, ReNew Transmission Ventures Limited secured the Koppal-Na­rendra transmission project in Karna­taka. This marked the entry of ReNew Po­wer, a key player in the renewable en­­er­gy space, in the transmission segment. At the intra-state level, ATL bagged the MP Power Transmission Package II through TBCB in September 2021.

Several interconnections are planned between India and neighbouring countries including a new 765 kV link between India and Bangladesh – the 765 kV Katihar (Bihar)-Parbotipur (Bangla­desh)-Bornagar (Assam) Line (initially operated at 400 kV) along with an HVDC back-to-back link at Parbotipur (2×500 MW, 1×500 MW at 400 kV and second 1×500 MW at 765 kV). A 400 kV D/C new Gorakhpur and new Butwal transmission line is pla­n­ned between India and Nepal. Further, a transmission line from the upcoming 900 MW Arun-3 hydroelectric project in Nepal is being developed by SJVN Arun-3 Power Development Com­pany Private Limited, SJVN’s subsidiary. In addition, there are plans for the development of an overhead electricity link with Sri Lanka, after the earlier proposal to set up an undersea power transmissi­on link was shelved due to its high cost.. 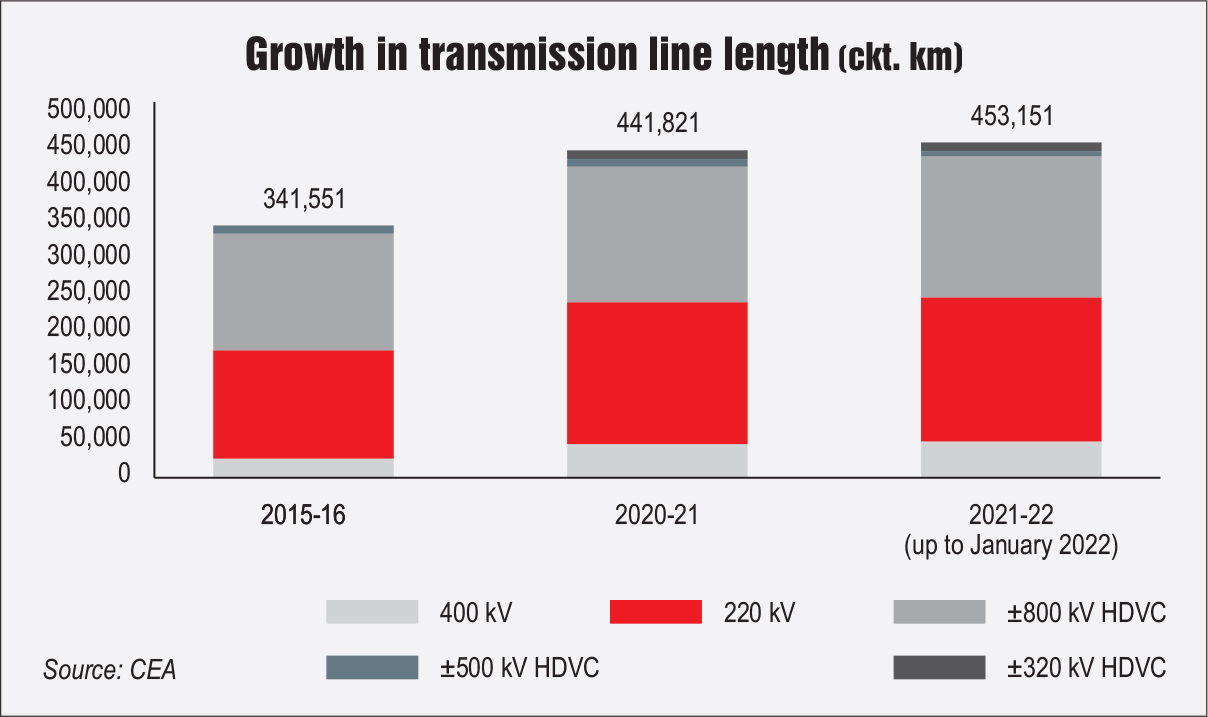 The transmission segment is at the forefront of adopting the latest technology. The voltage level has increased from 220 kV to 765 kV, ±800 kV HVDC and 1,200 kV, and advanced technologies such as voltage source converters and FACTS are being deployed. In 2020-21, Po­wer­grid commissioned Bipole 1 and associated HVAC and HVDC links under the ±800 kV, 6,000 MW, Raiga­rh-Puga­lur-Trichur HVDC project. One symmetrical monopole of the VSC HVDC link was also commissioned under the ±320kV, 2,000 MW, Pugalur-Thrissur HVDC project. Another technology trend in the power transmission segment is the growth in the uptake of digital switch­gear and substations. In December 2020, Powergrid, in collabo­ra­ti­on with Bh­arat Heavy Electri­cals Li­mi­ted, successfully commissioned India’s first indigenously deve­loped 400 kV optical current transformer and digital substation components at the 400/220 kV Bhi­wadi substation. Power­grid has also co­mmissioned digital substation based on IEC 61850 process bus technology at Malerkotla, Punjab.

Remote monitoring of substations and other equipment is also gaining traction as it helps utilities reduce manual intervention. During 2020-21, eight extra hi­gh voltage substations were integrated with Powergrid’s National Transmission Asset Monitoring Centre at Manesar, Haryana for remote operation, taking the total re­motely monitored substations to 242. Further, project developers are deploying LiDAR technology, drones and air cranes for the construction of transmission lin­es, and thermovision cameras and An­droid-based applications for op­era­tions and maintenance.

The government expects an addition of about 17,500 ckt km of transmission lines per year and 80,000 MVA of transformation capacity per year over the next three years. The National Infra­str­ucture Pipe­line has estimated a capital expenditure of about Rs 3,040 billion for the power transmission segment bet­ween 2020 and 2025. State utilities are expected to lead the transmission segment with a projected capex of Rs 1,900 billion. In addition to expanding the physical grid, utilities will increasingly need to invest in advanced and grid-enhancing technologies to impro­ve capacity, grid resilience and stability.

India has set a target of net zero by 2070, alongside other emission targets for 2030. Further, in the recently updated nationally determined contribution, the country has committed to having non-fossil fuel-based energy sources to […]

The California Independent System Operator (CAISO) is the largest ISO among 38 balancing authorities in the western interconnection, handling over two-thirds of the electric load in the west. In collaboration with the Califor­nia Public Utilities […]

The country plans to expand its rene­wable energy capacity to over 450 GW by 2030, from the current level of about 105 GW. The ambitious re­newable energy target is already acting as a catalyst for […]