The power distribution segment has been the focus of government reforms and schemes for many years. While these programmes have helped improve the segment’s performance to some extent, there is still significant scope for improvement.

With concerted efforts of the central and state governments, discoms have been able to achieve 100 per cent village electrification, extend grid connectivity to about 280 million unelectrified households, and reduce aggregate technical and commercial (AT&C) losses from 26.99 per cent in 2009-10 to 20.93 per cent in 2019-20. The financial losses of state-owned discoms also declined significantly, from Rs 726 billion in 2011-12 to Rs 280 billion 2017-18, although they increased to Rs 491 billion in 2018-19. Subsequently, the losses declined by 35 per cent to Rs 317 billion in 2019-20. The latest government scheme, the Revamped Distribution Sector Scheme (RDSS), aims to reduce AT&C losses further to 12-15 per cent and bring the ACS-ARR gap to zero by 2024-25.

However, inadequate tariffs, high debt and delays in the payment of subsidies continue to weigh down discoms’ performance. As per ICRA, the tariff-determination process for state discoms remains sluggish, with tariff petitions for 2022-23 being filed by 24 out of 29 states and tariff orders being issued only for 18 states. The median tariff hike approved for 2022-23 is higher at 2.2 per cent compared to 0.6 per cent for 2021-22 but much lower than the median tariff hike of 8.2 per cent sought by the state discoms. The gross debt for the discoms has also increased to Rs. 5.5 trillion as of March 2021 and is estimated at Rs 6 trillion in 2021-22. In addition, the dues to power generators remain high at Rs. 1.3 trillion as of May 2022.

Going forward, new amendments to the Electricity Act, 2003 are expected to alleviate the stress in the distribution segment. The unbundling of the wires and supply businesses has been a key feature of several draft amendments to the act, but it has reportedly been put on hold owing to the lack of cooperation from the states. The government is likely to bring in amendments to the act, with certain new provisions, in the monsoon session of Parliament. 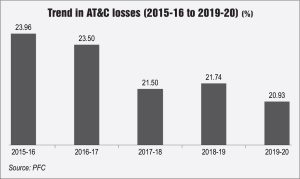 Update on the RDSS

The RDSS, launched in July 2021, has made some headway in recent months with discoms finalising their implementation plans. The reforms-based and results-linked scheme has an outlay of Rs 3,037.58 billion over five years, with an estimated government budgetary support of Rs 976.31 billion. As of December 2021, the government has reportedly approved proposals worth over Rs 1.62 trillion for 13 states. Of this, about 54 per cent (Rs 880 billion) has been earmarked for smart metering and the remaining for infrastructure upgradation for loss reduction. The top seven states account for over 87 per cent of the approvals in value terms led by Uttar Pradesh (Rs 357 billion), Tamil Nadu (Rs 283 billion), Rajasthan (Rs 186 billion), Madhya Pradesh (Rs 182 billion), Gujarat (Rs 165 billion), Andhra Pradesh (Rs 134 billion) and Kerala (Rs 106 billion). The other states include Assam, Rajasthan, Jammu & Kashmir, Meghalaya, Mizoram, Andhra Pradesh, Gujarat, Himachal Pradesh, Kerala and Uttarakhand. Under the scheme, most states plan to take over the financial losses of their discoms and liquidate 100 per cent of the government department’s dues by 2024-25. In case a state is unable to meet the milestones, it will not be eligible to avail of the funds.

Ministry of Power (MoP) launches new scheme to liquidate dues: The MoP has issued the Electricity (Late Payment Surcharge and Related Matters) Rules, 2022. As per these rules, the total dues owed by distribution companies to generation and transmission companies can be paid in equated monthly instalments (EMIs). Further, the total dues including late payment surcharge (LPS) up to the date of notification of these rules will be rescheduled and the due dates will be redetermined for payment by a discom in EMIs. Furthermore, discoms with dues of over Rs 100 billion can clear them in a maximum of 48 EMIs while those with dues of Rs 40 billion-Rs 100 billion can clear them in a maximum of 40 months. Discoms with dues of Rs 20 billion-Rs 40 billion, Rs 10 billion-Rs 20 billion, and Rs 5.01 billion-Rs 10 billion will have a maximum of 34 months, 28 months and 20 months respectively to clear their dues.

Meanwhile, discoms with less than Rs 5 billion will have a maximum of 12 months to settle their dues. The rules are applicable to the outstanding dues of gencos, interstate transmission licensees, and electricity trading licensees. LPS will be payable on the payment outstanding after the due date at the base rate applicable for the first month of default. The rate of LPS will increase by 0.5 per cent for every successive month of delay, provided the LPS does not exceed 3 per cent more than the base rate at any time.

National Open Access Registry (NOAR) goes live: The NOAR went live successfully on May 1, 2022. The NOAR has been designed as an integrated single-window electronic platform that is accessible to all stakeholders including open access participants, traders, power exchanges, and national/regional/state load despatch centres (LDCs) for electronic processing of short-term open access applications, thereby automating the administration of short-term open access (STOA) in the interstate transmission system (ISTS). The NOAR platform will act as a repository of information related to STOA in the ISTS, including the standing clearance issued by regional LDCs or state LDCs and STOA granted to open access customers, and make such information available to stakeholders online. The payment gateway provided for making payments and integrated with the NOAR will facilitate financial accounting and tracking of STOA transactions.

Rules for green open access launched: In June 2022, the MoP notified the Green Open Access Rules, 2022, aimed at promoting generation, purchase and consumption of green energy, including power from waste-to-energy plants. The rules enable a simplified procedure for open access to green power and faster approval for green open access, uniform banking, voluntary purchase of renewable power by commercial and industrial consumers, applicability of open access charges, etc. Under the rules, consumers can demand the supply of green power from a discom.

Discom privatisation in union territories (UTs): The discom privatisation process of UTs, announced in 2020, has made limited headway so far. Two UTs – Chandigarh, and Dadra & Nagar Haveli and Daman & Diu – have been awarded to private players, namely, Eminent Electricity Distribution Limited (owned by CESC Limited) and Torrent Power, respectively, for the purchase of 51 per cent share in the discoms of these UTs.

The financial viability of discoms remains a major challenge for the sector. The need for a financially sound distribution segment assumes greater importance with the ongoing energy transition since renewable energy generators and investors need payment security from discoms. Moreover, in the coming years, electricity flows will become increasingly complex with the growth of decentralised generation and the proliferation of EV charging infrastructure. In addition, peak demand is expected to continue growing, putting pressure on discoms to provide reliable power by tying up adequate capacity.

Net, net, although the distribution segment has shown some improvement in the past decade or so, the discoms need to step up their efforts manyfold in order to meet the challenges of the future. n