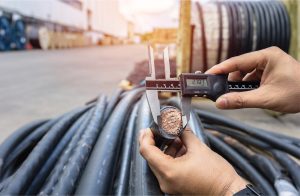 In a power transmission and distribution network, cables and conductors are the most essential components. They form the power sector’s backbone, and any breakdown in the transmission network has the ability to interrupt po­wer evacuation and end-user power de­livery. As a result, timely, extensive and precise testing of cables and conductors is critical for ensuring a stable and reliable power supply. Moreover, in the current scenario of increasing power de­mand, it is imperative to keep these com­­ponents in good condition through proper testing and measurement (T&M) techniques. Further, cables and conductors are crucial for the development of a new network as well as for strengthening the existing grid in areas with increasing power demand, but little or no space available to lay new lines. This necessitates the development of a robust network and adoption of adequate T&M solutions. The T&M of power equipment is essential for maintaining efficient and optimal operation of equipment and ensuring 24×7 power supply in the country. To achieve the desired level of performance and prevent failures, utilities need to follow proper T&M practices for cables and conductors.

Testing is done to check the conformity, quality and functionality of a component. Given the critical role of conductors, it is important that they are properly tested. Cables and conductors need to be tested and maintained at regular intervals, as the breakdown of any one of their components can trigger a grid collapse. A competent testing procedure im­­proves the conductor’s durability and performance, while also preventing costly failure incidents in the future. The­se tests offer accurate information about conductor issues and quantify their se­ve­rity, therefore reducing fault recurre­nce and increasing utility network up­time. Besides, proper T&M of cables and conductors facilitates cost reduction, since it is less expensive than repairs.

One of the most commonly used routine testing techniques is type tests. A type test involves multiple different testing techniques such as partial discharge test, tan delta measurement, conductor resistance test, tensile test, hot deformation test, hot set test, shrinkage test and thermal stability test. For a type test, samples are to be taken continuously fr­om the length of the conductor, which has to undergo various tests, such as visual ex­amination. In a visual examination, the conductor is first examined physically for good workmanship and general surface finish. The conductor drums are required to be rewound in the presence of the inspecting officer, and the conductor is considered to be conforming to the requirements of the specifications and IS 398 (Part II)-1996 only after the inspector checks for scratches, joints, etc.

The surface condition test is another testing technique. For this test, a sample of the finished conductor for use in a 11/33 kV system, with a minimum leng­th of 5 metres and compression-type dead-end clamps compressed on both ends in a manner that permits the conductor to take its normal straight line shape, is subjected to a tension of 50 per cent of the ultimate tensile strength of the conductor. The surface should not depart from its cylindrical shape, nor should strands move relative to each other, such that they get out of place or disturb the longitudinal smoothness of the conductor. The measured diameter at any place should not be less than the sum of the minimum specified diameters of the individual aluminium and steel strands. The utilities can also perform stress and strain tests. They are considered only for collecting creep data of the conductor from the manufacturer. A conductor sample of a minimum length of 10 metres, suitably compre­ss­ed with dead-end clamps, is used.

According to the guidelines issued by the Central Electricity Authority (CEA) for rationalised use of high performance conductors (HPCs), the constituent ma­terials used in HPCs vary; some cores are common steel strands coated with zinc (galvanised), zinc alloy or aluminium while other conductors utilise relatively new materials such as fibre-reinforced al­uminium composites or fibre-reinforced polymer composites. The requir­ed tests and test methods will differ dep­ending on materials. At present, facilities for all types of tests are not available in India, and many of the type tests are carried out outside the country, adding to the cost of a project.

Moreover, the CEA recommends that power utilities should consider the installation of HPCs in existing and new power lines to augment their transmission ca­pa­city. Although considered to be relatively more expensive than conventional conductors by two to five times, HPCs co­uld be considered economical if the other associated costs and loss reductions are accounted for.

Net, net, electrical system errors are in­esca­pable; but, with good T&M, any fault in power equipment may be corrected before it becomes a real problem. Going forward, this is expected to go a long way in maintaining a reliable and robust power network, and ensuring 24×7 quality power supply in the country.