The Ministry of Power (MoP) has released the Tenth Annual Integrated Rating and Ranking of Power Distribution Utilities during the review planning and monitoring (RPM) meeting with states and state power utilities held on August 05, 2022.

Integrated rating exercise is being carried out annually since 2012 with the aim of evaluating performance of utilities on a range of parameters covering financial sustainability, performance excellence and external environment and their ability to sustain improvements year over year. The methodology for the rating has been comprehensively reviewed and revised in the current rating exercise. The scope of the integrated rating exercise has been broadened which now covers 71 utilities including state discoms, private discoms and power departments (PDs) spread across the entire country. The rating now lays a higher emphasis on financial performance, while also assessing operational efficiencies and external ecosystem of discoms. The rating will now be dynamic in nature based on triggers having impact on discom financials. 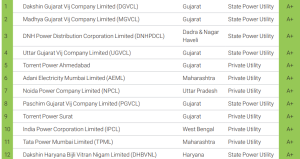