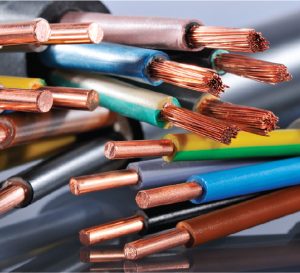 Cables and conductors are among the most essential components of a power transmission and distribution (T&D) network. The cables industry has started gaining momentum after a downturn due to the Covid-19 pandemic, driven mainly by growth in the industrial and commercial sector. A key driver behind further expansion of the industry is the need for power evacuation from upcoming renewable energy projects as well as for providing 24×7 re­liable power supply. Projects such as the Green Energy Corridors, Transmis­si­on Sc­heme for Renewable Energy Zones and the Ministry of New and Renewable Energy’s plan to bid out 37 GW of offshore wind energy projects in the next eight years till 2029-30 are already under way to facilitate integration of re­ne­wable energy into the grid. On the technology front, utilities are focusing on optimising power transfer per unit right of way (RoW) and on increasing the current carrying capacity of trans­mi­­ssion lines. High performance cond­uc­tors su­ch as high temperature low sag (HTLS) conductors and gas-insulated lines (GILs), and cables such as cross-linked polyethylene (XLPE) cables, un­der­grou­nd cables and e-beam cables are gaining traction.

The cables and conductors industry witnessed a slump due to the Covid-19 pandemic as domestic manufacturing suffered owing to supply chain disruptions, which also led to delayed payments. Whi­le there has been an upturn in the cables industry during 2021-22, the de­mand in the conductors industry is yet to reach the pre-pandemic level.

As per the Indian Electrical and Elec­tro­nics Manufacturers Association, cables and conductors accounted for 38 per cent and 6 per cent, respectively, in the overall electrical industry size during 2021-22. The cables industry registered a growth of around 21.4 per cent during 2021-22 over the previous financial year. Meanwhile, growth stood at 16.3 per cent in the cables industry compared to the pre-pandemic level (2019-20). The cables industry witnessed headwinds in the form of delays in ordering due to elevated commodity prices and increase in prices of raw materials such as XLPE, PVC and GS wires.

Notwithstanding these challenges, the cables industry has grown due to dema­nd growth in the industrial and commercial sector. It has also registered a surge in both imports and exports. Meanwhile, the market for conductors has shown a decline of 1.3 per cent in 2021-22 over 2020-21 and a much greater decline of 14.3 per cent compared to the pre-pandemic level (2019-20). Demand for transmission equipment covering conductors is stagnant due to a pick-up in export orders and a decline in domestic supply.

The growing T&D network is the key demand driver for cables and conductors. The domestic power transmission segment is expected to attract investments worth Rs 3.5 trillion over the next five years, resulting from changing de­mand patterns, evolution of electric mobility and integration of the grid through the general network access mechanism. The government is also aiming to have non-fossil fuel-based en­ergy resources account for about 50 per cent of the cumulative electric po­wer ins­talled capacity by 2030, as ap­p­roved under India’s updated Nationally Deter­mined Contribution to the United Na­tio­ns Framework Convention on Cli­ma­te Change. In line with the shift in policy fo­cus from conventional sources to re­newable power sources, the focus of the transmission segment is now on augmenting infrastructure for the evacuation of power generated by renewable energy projects, thus eliminating regi­o­nal disparity.

Considering India’s geographic spread of renewable-rich states on the western and southern coasts, augmentation of the interregional capacity for transmitting power from energy-surplus states to energy-deficit states and load balancing capacity would about be required. The need for interregional grid connectivity will increase, with a rise in power dema­nd. Apart from this, with focus on regional energy exchange, new cross-border interconnections are expected to be built to facilitate the flow of power across coun­tries. The Green Grids Initiative – One Sun, One World, One Grid – envisi­ons connecting all countries with solar energy supply across the Tropic of Can­cer. India plans to take a major leap to­war­ds building an intercontinental rene­wable energy transmission network.

Per capita electricity consumption in India stood at 1,255 units during 2021-22 and is expected to reach 2,984 units by 2040, according to Powegrid. The growing power demand will create the need for transmission network expansion. The demand will also come from the renovation and modernisation of sub-transmission networks. Further, new forms of loa­ds such as the charging of a large number of electric vehicles, data centres and Indian Railways, which is undertaking an electrification drive, will be some of the other key drivers of expansion of the tra­ns­mission network.

In the power distribution segment, de­ma­nd for conductors and cables is primarily for network strengthening and expansion purposes. The Revamped Distribution Sector Scheme (RDSS), with an outlay of Rs 3,037.58 billion for five years, will provide assistance to discoms for infrastructure creation, including feeder separation and system up­grade. Besides, the central government is undertaking privatisation of the power distribution business in union territories, which is expected to lead to greater investments in network streng­the­ning and expansion.

The ongoing smart city projects, with large-scale developments being carried out in the power, telecom, housing and other infrastructure sectors, constitute another demand area for cables and conductors. Underground cabling is an essential part of smart city projects. It has become almost mandatory in den­se­ly populated areas, owing to increasing RoW issues.

XLPE cables are increasingly being dep­loyed by utilities. XLPE-insulated cables have better resistance to thermal deformation because of their higher thermal tolerance, which makes their current-carrying capacity higher than that of conventional cables. These cables also offer greater tensile strength, elongation and impact resistances. These cables are thus made suitable for high voltage and extra-high voltage applications up to 132 kV. Underground cable systems are also being deployed by utilities in areas where securing RoW is extremely challenging. During 2021-22, the ±800 kV Raigarh-Pugalur HVDC link, along with Bipole-II (Poles-III and IV of 1,500 MW each), and the ± 320 kV, 2,000 MW, Pugalur-Trichur voltage source converter-based HVDC system were commissioned by Power Grid Corpora­tion of India Limited (Powergrid). A unique feature of this project is the combination of overhead lines and underground cables to address the restricted availability of the transmission corridors in Kerala.

Several new cables have also been developed for specific application areas. For instance, solar cables are designed to suit the specific purpose of evacuating solar energy from photovoltaic modules. They are designed to handle high ultraviolet radiation and high temperatures, and are weather-resistant.. Similarly, various cab­les used in wind power plants are desig­ned to meet particular requirements.

On the conductor front, there have been many advancements such as the usage of HTLS, high surge impedance loading and GIL conductors. These conductors have been used in the recent 132 kV lin­es bid out by Odisha Power Trans­mi­ss­ion Corporation Limited, the 400 kV Me­e­rut-Kaithal D/C line and in the Nathpa-Jhakri hydro project respectively. The usage of these conductors inc­reases the transfer capability of the tran­s­mission line and simultaneously redu­ces line losses.

Although high temperature superconducting power cables can carry 5 to 10 times the current carried by conventional conductors, they are yet to see commercial deployment in the country. In India, aluminium conductor steel reinforced and all-aluminium alloy conductors are commonly us­ed for power transmission on overhead lines in the T&D system.

The cables and conductors segment is expected to witness robust demand in the medium to long term owing to the expanding T&D network. To meet the future peak load and integrate large re­ne­wable energy projects, huge investments will be needed to ramp up the transmission infrastructure. Similarly, the RDSS will push infrastructure creation in the distribution segment. How­ever, there is an urgent need for standardisation of specifications across this segme­nt, which would lead to improved efficiencies, and also reliability and replaceability of products.