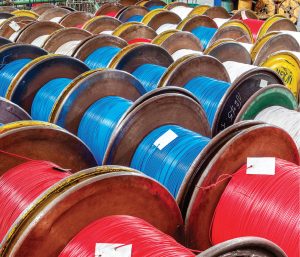 The government’s focus on ensuring universal access to electricity has been a major driver in the rapid expansion of the domestic cables and conductors industry over the past few years. The government’s initiatives in the power and infrastructure sectors, such as inc­rease in renewable energy capacity additions, rising investments in underground cables, and government projects for ele­ctrification and smart cities have spurred the demand for tra­nsmission and distribution equipment including cables and conductors. The cables and conductors demand is also driven by the growth of the telecommunications, residential and commercial sectors.

Over the years, the central government has launched several programmes for the power sector. In the distribution segment, the recently launched Revamped Distribution Sector Scheme (RDSS) will play a key role in driving the demand for cables and conductors. Meanwhile, in the transmission segment, equipment demand is boosted by schemes such as green energy corridors (GEC) and rene­wable energy zone (REZ) transmission planning. Other initiatives including electric vehicles (EVs), smart cities and railway electrification are also increasing uptake in the sector.

RDSS: In the grand finale marking the culmination of Ujjwal Bharat Ujjwal Bhavishya – Power @2047, the prime minister formally launched RDSS to revamp the ailing power distribution segment. The scheme aims to provide financial assistance to discoms for the modernisation and strengthening of the distribution infrastructure, and impro­ve­ments in the reliability and quality of su­pply to end consumers with an outlay of Rs 3,037.58 billion for a period of five years (2021-22 to 2025-26). The scheme consists of two components – Part A comprises metering and distribution infrastructure works, and Part B includes training and capacity building as well as other enabling and supporting activities.

As per the scheme guidelines issued in July 2021, distribution infrastructure works are required for strengthening and modernising the system as well as for loss reduction. These works include the separation of agricultural feeders to enable the implementation of the KUSUM scheme, deployment of aerial bunch cables and high voltage distribution systems (HVDS) for loss reduction, and replacement of high tension (HT)/ low tension (LT) lines as required. States and discoms have already initiated the process of drafting their action plans under the scheme.

All ongoing projects approved under schemes such as the Integrated Power De­ve­lopment Scheme (IPDS) and the De­endayal Upadhyaya Gram Jyoti Yoja­na (DDUGJY) have been subsumed un­der RDSS.

Launched in December 2014, the DDUGJY primarily focuses on the separation of agricultural and non-agricultural feeders to facilitate the judici­o­us su­pply of electricity to rural areas; str­e­ng­­thening and augmentation of sub-transmission and distribution infrastructure; and metering at distribution transformers, feeders and consumer sites. In terms of physical infrastructure, as of March 2022, feeder separation, involving 114,358 ckt. km of 11 kV lines, has been completed. Under the system strengthening component, the installation of 550,262 ckt. km of LT, 225,783 ckt. km of 11 kV (excluding feeder segregation) and 25,170 ckt. km of 33 kV and 66 kV lines has been completed. Further, all the inhabited unelectrified census villages were electrified under the scheme in April 2018.

Transmission scheme for REZ: The REZ scheme aims to evacuate 66.5 GW of re­newable energy capacity (50 GW solar and 16.5 GW wind) at an estimated cost of Rs 432 billion in seven renewable energy-rich states – Tamil Nadu, Andhra Pradesh, Karnataka, Tamil Nadu, Guja­rat, Rajasthan, Maharashtra and Ma­dh­­ya Pradesh. A comprehensive transmission system has been planned for the integration of potential REZs. The im­p­lementation of schemes is being undertaken in a phased manner in Rajasthan and Gujarat.

Railway electrification: The central government aims to fully electrify the broad gauge network by December 2023. The target will drive the demand for cables and conductors. Indian Railways undertook the record electrification of 6,366 rkm during 2021-22, taking the total electrified broad gauge route to 52,247 rkm as of March 2022, which is 80 per cent of the 65,141 rkm total broad gauge route. Another 12,894 rkm remains to be electrified by Dec­ember 2023. This is the highest electrification achieved by Indian Railways. The previous highest electrification was 6,015 rkm during 2020-21. Several lines are expected to be electrified to upgrade India’s railway network this year. This is expected to provide opportunities to overhead line eq­uipment suppliers as well as engineering, procurement and con­struction contractors. The expansi­on of metro networks across urban ar­e­as is also driving the demand for cables and conductors.

Smart city projects: The government’s Smart Cities Mission is expected to promote large-scale growth in the infrastr­uc­ture, telecom, power generation, tra­nsmission and distribution, engineering and automotive sectors. Under­­g­round ca­­­bling is an essential part of smart city projects. It has become al­most mandatory in densely populated areas, owing to the increasing right-of-way (RoW) issu­es. Further, EVs are ex­pec­ted to drive the growth of cables and conductors in a big way, given their requirement in EV char­ging infrastructure.

The cables and conductors industry has faced several challenges of late. Increa­sing commodity prices, the rise in crude oil rates and growing inflation have affected cable and conductor manufa­ctu­rers significantly. The prices of key commodities such as aluminium and co­pper used in the manufacturing of cables have increased tremendously. The volatility of raw material prices continues to increase. Therefore, their profit margins have squeezed and they have become uncompetitive in the international market. Also, the high price of fuel has directly impacted domestic transportation, resulting in increased transportation cost for cables and conductors. With regard to the installation of cables and conductors, the legacy issue of RoW continues to impede smooth im­plementation. Although there have been several technological advancements to reduce the RoW requirements, it still remains a challenge.

Notwithstanding these challenges, the cables and conductors segment is ex­pec­ted to witness robust growth given the lar­ge pipeline of transmission projects under the GEC and other government programmes as well as various distribution system strengthening sche­mes. The National Infrastructure Pipeline has estimated a capital expenditure of about Rs 1,445.66 billion for the power transmission segment and Rs 2,157 billion for the power distribution segment between 2022-23 and 2024-25. With the govern­me­nt’s emphasis on pushing renewable energy to the front, the industry is now looking forward to supplying cables to the solar and wind power segments in addition to the oil and gas, railways and other specialised segments. The expansion of prevailing grid networks coupled with the lack of efficient electric infrastr­ucture will drive the industry outlook in the coming years.

Overall, the significant capital expenditure, planned infrastructure developme­nt and ample potential for future expansion in the transmission and distribution segments present an optimistic business outlook for the cables and conductors industry.