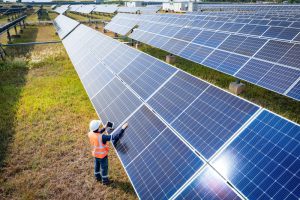 Integrated private power major JSW Energy Limited’s wholly owned subsi­diary, JSW Neo Energy Limited, re­cen­tly agreed to acquire Mytrah Energy (India) Private Limited’s 1.8 GW renewable energy portfolio for a consideration of Rs 105.31 billion. This is the largest ac­quisition made by JSW Energy since its inception, and will leapfrog its operatio­nal capacity by over 35 per cent from 4,784 MW to 6,537 MW. The acquisition of Mytrah Energy fits in with JSW En­ergy’s focus on achieving its renewable-led capacity growth target of 10 GW by 2024-25, well ahead of time.

Details of the deal

The Mytrah portfolio consists of 10 wind special purpose vehicles (SPVs) with a generation capacity of 1,331 MW, and seven solar SPVs with a generation capa­city of 422 MW (487 MWp DC), operating primarily in the southern, western and central parts of India. The assets have a proven operational track record and long-term power purchase agreements (PPAs) with an average remaining life of 18 years.

KPMG India Services LLP served as the transaction adviser to the company, while Khaitan & Co. were the legal advisers and PricewaterhouseCoopers Servi­c­es LLP carried out financial and tax-related due diligence. The tran­saction is expected to be completed by November 15, 2022, subject to fulfilment of conditi­o­ns or precedents set out in the share purchase agreement. The transaction is subject to the ap­p­roval of the Com­pe­tition Com­mission of India and other customary approvals.

The acquisition will accelerate JSW Energy’s renewable-led grow­th objectives. Post-acquisition, the company’s operational capacity will be enhanced to 9.1 GW (including under-construction pro­jects). JSW Energy has a total ins­ta­lled generation capacity of 4,784 MW, with 3,158 MW of thermal capacity and 1,626 MW of renewable ca­pacity. It also has 2,533 MW of renewable power projects under construction, of which letters of award have been received for 300 MW. Of the total renewable capacity, 85.5 per cent (1,391 MW) is hydro based, while the remaining 14.5 per cent (235 MW) is based on solar. Post the acquisition of the 1,753 MW re­ne­wable portfolio from Mytrah Energy, the company’s total generation capacity, including under-development capacity, will be around 9,070 MW, with a renewable capacity of 5,912 MW. The acquisition has increased the share of renewable energy in the company’s portfolio to 65 per cent from the previous 57 per cent. It also supports the company’s near-term target of 10 GW of renewables by 2024-25.

The deal has enhanced the company’s access to resources and technical expertise, helping it achieve its medium-term goal of 20 GW by 2030. Additionally, with the acquisition, cash flow visibility will be high, given the long-term PPAs with an average remaining life of around 18 years and attractive tariffs. 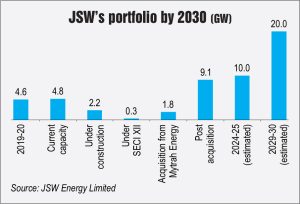 In an official release, Prashant Jain, joint managing director and CEO, JSW Energy, said, “We are excited to acquire Mytrah’s 1.75 GW renewable energy portfolio, whi­ch is value-accretive to our sharehol­ders on day one. This landmark deal demonstrates our strong commitment to achieving our vision of 10 GW of capacity by 2025 and being a leading player in India’s energy transition. This acquisition further strengthens and diversifies our operating footprint across various key resour­ce-rich states. We also believe that by le­ve­raging our strong in­dustry, operational and financing expertise, we would be able to significantly improve the operating performance of this entire portfolio, which will ultimately create tremendous value for our shareholders. JSW En­ergy will continue to look for more such opportunities for value-accretive acquisition to aid its already ambitious growth plans for this sector. This provides a fillip to the company’s growth aspirations and aligns with our renewable-led growth philosophy. Apart from generation, we are also continuing our or­ganic pursuit of storage as well as gre­en hydrogen and its derivatives.”

With an eye on increasing its renewable capacity, the company is aiming to become a significant market player in the renewable energy space. Renew­ab­les are expected to play an even larger part in its growth, moving forward. Since JSW En­ergy is a well-established player in the power sector, it is expected that the company will have an advantage in leaving a greater footprint in the green energy space.

JSW Energy has set an ambitious target of reducing its carbon footprint by 50 per cent by 2030 and achieving carbon neutrality by 2050, by transitioning towards renewable energy. The company aims to reach 20 GW of capacity by 2030, with the sh­a­re of renewable energy inc­re­asing to 85 per cent.