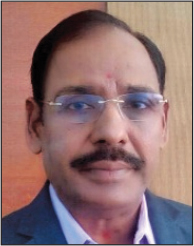 Coal-fired power continues to dominate in India with more than 58 per cent share. However, the insta­ll­ed renewable energy capacity is on an inc­re­asing trend, reaching more than 35 per cent. Therefore, coal-fired power plants must adopt a strategy to reduce the heat rate and ensure economical generation of power. The heat rate of coal-fired po­wer plants represents the amount of heat needed to generate 1 kWh of electricity. Heat rate is the heat energy input per unit of electrical output or heat rate is also the inverse of plant efficiency.

India is the largest coal producer and us­er in the world. Therefore, power plants should move towards reducing carbon emission goals and heat rate improvement will continue to play a vital role. Heat rate improvements for 1 tonne of coal correlates with 1.6 tonnes of co2 (45 per cent carbon in the coal) emission reduction in air, such as CO2 and nitrogen oxide (NOx).

To meet the changing market conditions with increasing renewable energy sourc­es, coal-fired power plants need to im­p­ro­ve their flexibility and operating practices, specifically to operate at low load for a short period of time with less than 60 per cent turbine maximum continuous rating (TMCR) load. Power generating companies must identify opportunities to improve coal-fired units and prioriti­se these opportunities based on their ex­pected return and impact on their bu­siness objectives for operating at low load operation. Even though th­er­mal power PLFs have dropped 2 per cent compared to last ye­ar, they are expected to increase after Co­vid-19. A recent report indicates that large thermal power plants can give a compe­titive advantage, making existing uni­ts more flexible, safely operated at minim­um load operation and successfully meeting both technical and competitive marketplace.

This article focuses on the importance of heat rate, coal characteristics and SP En­ergy Tek’s coal-fired unit’s case studies, along with recommendations.

The following key parameters are recommended:

The purpose of discussing the subject of coal characteristics is to understand the combustion parameters, comband mills optimisation and their influences to attain proper combustion and steam parameters to improve boiler efficiency as well as the desired heat rate.

VM consists of hydrocarbons and other gases such as CO2 and nitrogen found in coal. In other words, VM is an index of ga­ses present in coal. A typical range of VM is 16-30 per cent for Indian coal. VMs influence flame stability, minimum ignition temperature of coal, support ea­sier ignition of coal particles, decide the fineness, unburned carbon in fly ash, secondary air requirement, reactivity and secondary oil support. VM less than 20 per cent may be difficult to burn and considered to be low volatile coal.

FC is the combustible matter left in the furnace after VM is distilled. It consists mo­stly of carbon that burns slowly be­ca­use carbon burns slower than vo­la­tiles. FC gives a rough estimate of the he­ating value of coal and dictates coal fineness, PA/coal ratio and mill outlet temperatures. 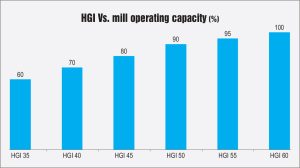 Fusibility of coal ash is analysed through an experimental method of testing. Prepare a pyramid-shaped ash sample, 19 mm in height and 6 mm base width and is heated in a gas/oil/electric furnace with controlled atmosphere (reducing or oxidising). This information provides various temperatures as shown in the figure. Ash softening temperature is one of the key parameters for boiler operation that decides furnace exit flue gas temperature (FEGT), clinkering, slagging and fouling characteristics of the boiler.

The FC/VM ratio is one of the key parameters that plays an important role in deciding the plant’s stable operation, in­cluding low load or technical minimum or full load operation. Coal quality can be determined from proximate analysis and gross calorific valve (GCV) as recei­ved basis.

Typical boiler and balance of plant parameter gaps that are influencing the heat rate are identified in the table. The operation/efficiency team always keeps an eye on these parameters to reduce heat rate losses on a day-to-day basis. Typical values indicate that the heat rate of the plant can easily reduce the heat rate to around 30-40 kCal per kWh with proper monitoring during operation. In addition, a operations and maintena­nce team is trained to improve controllable losses, optimise soot blower operation, routine testing and tuning, FW heater’ performance, combustion optimisation and boiler parameters’ tuning, improve turbine cycle performance and conden­ser performance should help the plant reduce heat rate to 25-45 kCal per kWh. 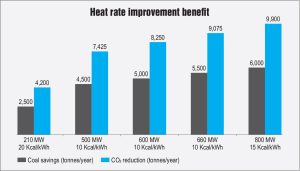 The steam turbine/generator service provider identifies several areas on the steam turbine side, such as diaphragm changeout, combined with rotating bru­sh seals; new blades and tip seals; new rotors; one row of new blades with conversion to full arc; or all the above with new inner casing and several additional rows of blading. The OEM should relax operational restrictions imposed such as prewarming criteria. On the boiler side, the OEM identifies dozens of potential improvements inclu­ding economiser upgrades, furnace wall corrosion reduction and superheater ma­terial upgrades to improve fuel ash corrosion resistance, restore full load capability and improve availability. It also recommends strategies for coal switching to me­et low load to full load operation.

Coal blending provides economic benefits and helps to improve the heat rate. Blending or firing two coals separately results in a change in the aggregate quality of coal to be fired. The main characteristics of coal that affect boiler performance are FC/VM ratio, GCV, HGI and ash content in the coal. Indian power bo­ilers are designed for high ash coal and GCV of coal considered is typically ar­ound 3,200-3,800 kCal per kg. Boiler performance is based on this design of coal. Blending or firing separately Indian coal with imported or different Indian mine or seam coal requires close to FC/VM ratio, HGI and ash characteristics including ash softening and ash fusion temperatures. GCV variation of about 500 kCal per kg is acceptable. Blending has potential for economic considerations, especially heat rate improvement.’ 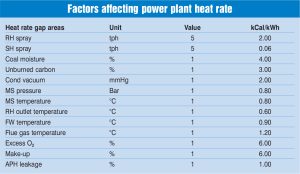 Low or minimum load is defined as the lowest possible load that a generating unit can deliver under stable operating conditions without oil support, with minimum equipment damage. Low load op­e­ration should be done for shorter durations, otherwise low load heat rate is remarkably high and not economical. For example, a 500 MW unit, 60 per cent TMCR load operation leads to a heat rate as high as 2,437 kCal per kWh (1.55 units of electricity for GCV of 3,800 kCal per kg coal). The ramp rate indicates how fast a power plant load can be changed during operation. The ramp rate is defined in MW per minute, typically 4-6 MW per minute. In general, recommended ramp rates greatly depend on the type of the unit. >4 MW per minute for subcritical boiler with natural circulation and >6 MW per minute for controlled circulation units from minimum load to full load.

Heat rate is highly influenced by unit load operation. The lower the load, the higher is the heat rate and it is unlikely to meet the financial obligations of the po­wer plant. Due to renewable energy pe­n­e­­tration, baseload coal-fired power plan­ts are moving towards cyclic mode of op­erations, running at minimum loa­ds for extended periods when the load demand is low as well as to maintain SLDC merit order. In association with bo­il­er key parameters, process control logics bring mills in operation to support and establish a sustainable minimum load to full load operation in sliding pressure mode.

SP Energy Tek’s experience is mainly focused on combustion/mills optimisation and boiler parameters’ tuning such as PA/coal ratio, coal pipe velocity, mill outlet temperature, coal fineness, SA/PA ratio, OFA, coal O2/N2 ratio for NOx, coal quality (FC/VM <1.4), VM is greater than 20 per cent and GCV of >3,200–3,800 kCal per kg. The recommendation is that the SLDC should allow to operate the unit at technical minimum load (say, >60 per cent) and this kind of operation can also help improve the reliability of the equipment and achieve a decent heat rate.

Since the unit is going to be operational at minimum load with slightly high ex­cess air, there is no concern ab­o­ut the unburned carbon accumulation and boiler explosion. Emissions such as SO2 and NOx are not an issue at low load or technical minimum load operation. For example, for a 500 MW coal-fired unit operating at 70 per cent PLF, 0.5 per cent heat rate reduction of 10 kCal per kWh will save Rs 50 million in the annual coal cost. Therefore, heat rate impro­vement is also the first step to reduce CO2 and all ot­her emissions. Heat rate will continue to play a vital role and this decides the po­wer plant’s bottom line improvement.