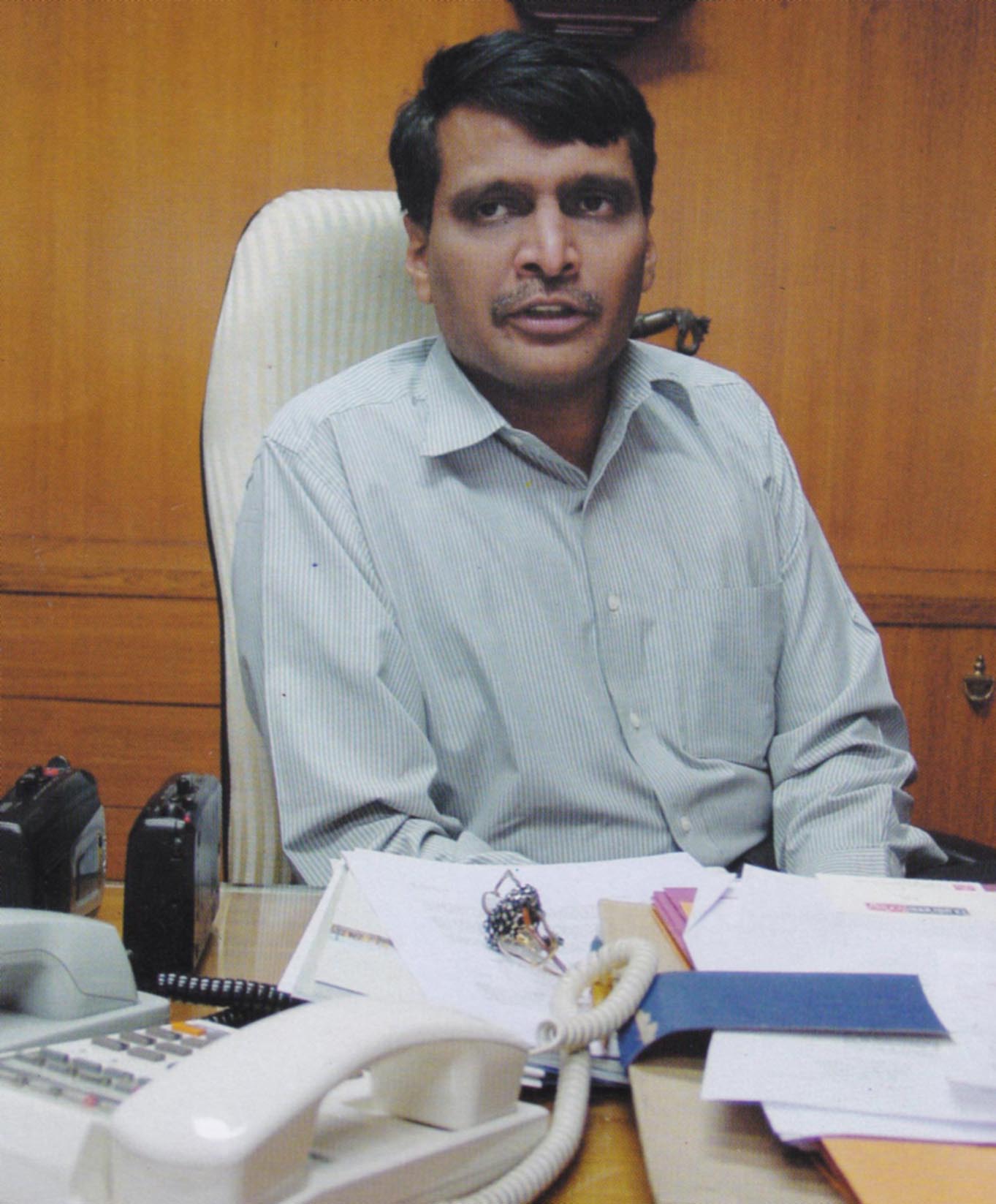 Suresh Prabhu took over as power minister at the turn of the millennium and set out clear goals for reforms. One of his major achievements was introducing the Electricity Bill, 2001 in Parliament. In this lively interview, he gave his rather interesting perspective on various issues impacting the sector at the time….

It has been 10 months since you took charge as power minister. What have been your most satisfying achievements?

We have been able to take the right approach to the problems we are facing today. The real problem is in distribution. Unless we fix distribution, no other problem in the power sector can be solved. If we fix distribution, there is nothing really that we need to do. So first of all, we have made a structural change, and not in terms of policy. We have started actually implementing. So, for all the districts in India, we have now started an exercise to identify the problems in distribution. For 60 selected districts, two or three from each state, we are actually making an investment to bring about a change in distribution. The idea is to introduce accountability and accounting and, as a result of that, reduce the commercial losses of the power sector. If we can reduce the commercial losses, the investment we make will itself be paid back in the shortest possible time. The payback period would be less than two years or maybe two-three years. This will eventually make the entire power sector commercially viable and in the process, the problem that we are facing upstream of not getting enough capacity added in generation would be automatically resolved.

Second, I have introduced the Electricity Bill, 2001 in Parliament, which is a landmark in the development of the power sector. Third, we are organising five major events in India, one for fossil fuel, one for non-fossil fuel, one each for distribution, for transmission, and renovation and modernisation of existing power plants. All these events will bring a lot of investment in the power sector.

You mentioned distribution and the district­level work you are doing. Are you thinking of privatisation in these districts right now?

Which agencies will drive this process?

This will be done by the ministry, so that the CEA is involved. Then we have appointed five nodal agencies for five different regions, including Power Grid, NTPC, Power Research Institute and the National Power Training Institute.

How much money is likely to be spent on this?

It seems that the IPPs will not be there to the extent that was initially anticipated. How do you intend to make up for their absence?

In the Tenth Five Year Plan, we have prepared a plan to attain 50,000 MW. This will be achieved by the central, state andprivate sectors put together. This also includes the share of non-conventional energy, renewables and nuclear power. We will be releasing the data before the commencement of the Tenth Plan, which begins on April l, 2002. Proper project­specific figures would be released. Preparation has started on this and we are monitoring it on a week-to-week basis.

What is your response to the perceived decline in interest among foreign investors?

Decline in interest? Is there a decline? On August 16, 2001, the Power Grid Corporation had held a conference on expression of interest. Seventeen companies, including 10 foreign companies, expressed interest in transmission materials and the extent of interest shown was Rs 260 billion. Recently, we have placed orders for Rs 60 billion worth of equipment. There are six projects in Andhra Pradesh with a capacity of about 2,100 MW. We have a very unique arrangement, a tripartite agreement, wherein the state government, the financial institutions and IPPs have agreed to put up projects worth 2,100 MW.

Will this be a model for other arrangements?

In the last six years, NTPC has not really achieved what it had said it would, in terms of MW…

NTPC will attempt more than its target in the Tenth Five Year Plan. Preparatory work for all the power plants they will put up has already started. So, they will not only attain but will exceed their targets for the Tenth Plan.

What is your opinion on the Dabhol issue?

This is not an issue to express an opinion on. You express your opinion on a painting, whether it is good or bad. The Government of India has from the very beginning been attempting to resolve the problem in a manner that would take the national interest into consideration as well as the interests of the bilateral parties in the contract.

In terms of SEB dues to NTPC and other central utilities, what solution is being considered?

All the SEB dues have been liquidated. This has already been agreed upon by all the states. Now the process of documentation has started. This is one way that we will utilise the dues of the central utilities of Rs 410 billion. Second, liabilities worth Rs 410 billion will be taken away from the books of the SEBs. How can we restructure the SEBs without taking care of these liabilities? Third, because of the tripartite agreement that we are working out, for the first time there will be an institutional arrangement that ensures that future payments will be made immediately.

What has been the response of the financial institutions as per the preliminary discussions?

The FIs have no role in this. The state governments will issue the bonds, and the central government will take them.

What about hydro power?

Hydro power development is a major programme that we have decided to undertake. We have already asked the CEA and others to conduct banking studies and we will soon be launching a hydro development programme in which several countries are interested in participating.

Which countries are these?

There is Austria, Canada, Norway, Spain, Sweden and Russia. In fact, the Norwegian prime minister came here and devoted his full time to giving a power seminar. The French minister is coming in November to inaugurate a seminar we have organised. Japan is taking keen interest in renovation and modernisation of existing power plants. So, there is a lot of foreign interest.

But there is definitely a negative perception amongst foreign investors with the exit of several of them from India.

Is it only in India that people exit businesses? What happened to Compaq and HP? Has the US been finished? It has only been that, as a realignment of business, National Grid has decided not to focus on India. Its CEO came and met me. He said he was interested in privatising the lines. Its interest must merge with ours. We are not going to do something tailor-made for everybody. Okay, you want tea, how much sugar should I put-one spoon, two spoons? If you want to run a tea-stall, then that’s a different issue.

What about the financing issues that have kept many at bay?

In the next five years we are meeting a target, so what is the worry. What we could not attain in 10 years, we will be attaining without any big plans. We have got a hugetarget for demand-side management, which itself would release excess power without making investment. Through distribution reforms, some power will be released. Plus, we are revamping the sector. What else do you want? Why are you worried about issues that are extraneous?

What about mega projects?

Payment security mechanisms have been approved for two mega projects. In any case when I talk about 50,000 MW; we are not talking about these mega projects.

Do you have any quantitative goals for SEB performance?

Our only goal is to revive the sector.

In terms of hydro projects, every few years there are big announcements. There is talk about 10,000 MW-18,000 MW schemes. But the achievements fall far short of the targets…

What we are now doing is a banking study. We are talking about 150,000 MW potential in the hydro sector. But where are the studiesfor it? For example, how much is the cost of generation, from where is this figure coming? Has anybody done anything? So, we are doing all the fundamental work now. One is to announce some grand plans – India is going to be a superpower. But when we cannot put up a super thermal plant, what kind of a superpower are we?

In terms of non-conventional energy, which are the areas that you can expect more from?

This subject is dealt with by another ministry. The ministry has decided to add 5,000 MW in the Tenth Plan. In fact, I made a presentation to the prime minister that 8 per cent of the incremental capacity should be added from renewables. We do not want to create environmental problems, that is very important.

When do you expect the Electricity Bill to be passed by Parliament?

That is Parliament’s prerogative.

When do you hope it will be passed?

Hope is always there. If you live on hope, that is a dope. We should live on reality.

It’s very difficult to get an answer from you on this one.

I am surprised. This is not my territory. Even if I say I want to pass it tomorrow, Parliament is not in session tomorrow. It will only be in session during the winter. Then there will be so many things happening that I don’t know. The agenda of Parliament I don’t set up.

What are the key benefits of the bill?

We have freed generation from licensing. We are providing common access to transmission. We are also over a periodof time providing common access to distribution. We have also proposed a districtcommittee for powerdistribution. The district committee will plan how to utilise the resources available in the district. While we are thinking about power plants to be set up at a load centre, we are also simultaneously thinking about setting up projects district-wise.

At this stage, what sort of cost for power can India look at?

That’s a difficult question. It depends on so many factors: fossil fuel costs and other input costs, then, converging costs.

Which areas are we looking at for investment?

One is demand-side management. There is tremendous potential for investment in this area. Second, there is investment potential in distribution. When I talk about district-wise bankable projects, there also the investment can really come in. These are my two priorities. Once you do these, everything else will automatically fall into place. If I don’t do this groundwork and I keep on inviting investment from all over the world, it does not work. And then when they go back, you will ask me why have they gone back. They have gone back because we did not prepare for them properly.

That is something that is really needed. We need to have an integrated energy policy. Unfortunately, our ministries are fragmented. I am looking after only electricity, that too electricity from conventional sources, and hydro. But I am not dealing with renewables, coal, oil, natural gas, petroleum products. So, these are all issues that need to be integrated.

How can one work towards it?

This can only be done by inter-ministerial concentration. I have highlighted this issue in various forums. I am sure one day we will have an integrated energy policy.

I fully agree with you. We have also highlighted this issue. I can’t take the initiative myself. My job is to highlight the issue.

Any personal thoughts in terms of what you have enjoyed so far?

I haven’t got the time to think about that. My stay in the ministry has been preoccupied with so many problems and so many initiatives. Maybe when these initiatives have been implemented, then I will have time to relax and sit back and think