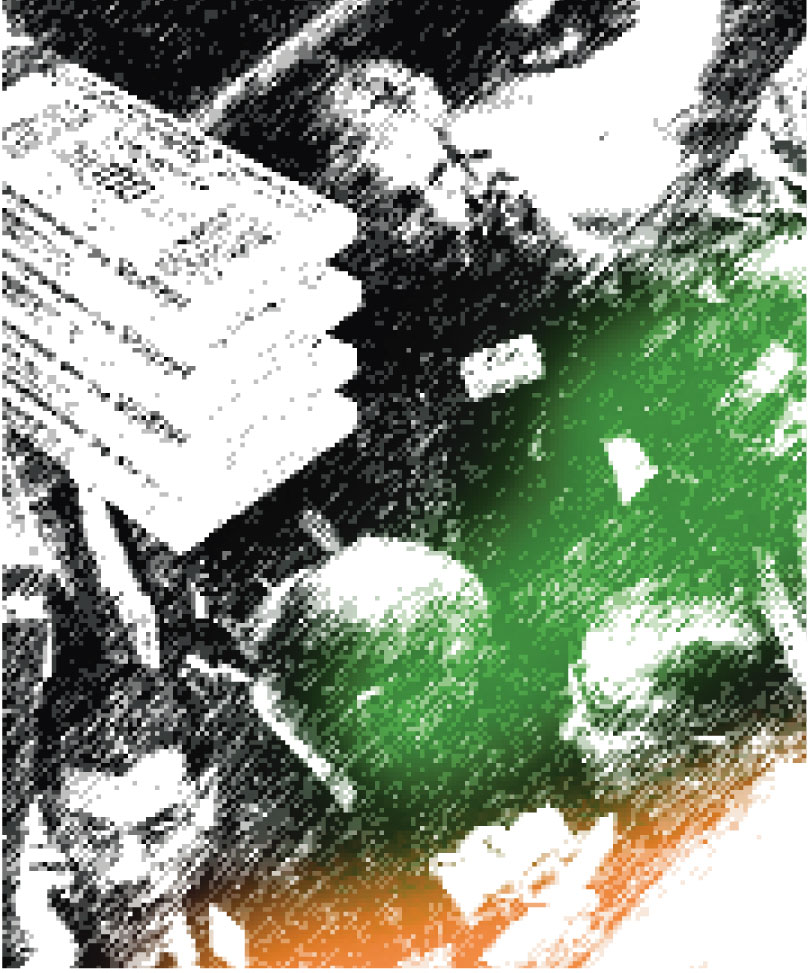 The setting up of power exchanges in 2008 was a major milestone in the sector, a key step towards creating the vibrant power market that we have today. The exchanges have boosted trading volumes significantly, introduced a transparent price discovery mechanism, and enabled buying-selling of power on a near real-time basis. This story from our archives goes back to the time when the country’s first energy exchange, IEX, was conceptualised…

The Central Electricity Regulatory Commission (CERC) has agreed to give in-principle approval to Financial Technologies (India) Limited (FTIL) and the Multi Commodity Exchange (MCX) for setting up their proposed national-level power exchange called Indian Energy Exchange Limited. This could be the first power exchange in the country.

The need for a power exchange has been felt for some time to cater to the demand and supply situation on time, to provide a common platform to buyers and sellers, and to assist in price discovery.

The scope for trading power in India is huge even with the current power shortage. There is uneven distribution of resources, for a start. The eastern region, rich in coal resources, has a lot of pit- head-based plants. The northeast is rich in hydro power potential. But the western and northern regions are badly off with a big power deficit owing to immense industrial and agricultural loads. A power exchange will facilitate the flow of power from the surplus regions to the deficit ones.

Benefits of a power exchange

In India, on the one hand, there are a vast number of power-deprived people and on the other, there exist a large number of underused captive power plants (CPPs). With a lot of merchant capacity also expected to be added in the near future, there is a need to encourage peaking power plants and bring surplus captive generation into the grid. This is where the energy exchange will come in, organising short-term trading on a transparent, equitable, and efficient platform.

It is intended to be a neutral and unbiased platform for providing a transparent price discovery mechanism. It will also be advantageous to the regulators because it will act as a single-point check on non-competitive practices. Other likely benefits are:

Today, the market demands both spot markets and futures markets. Risk management tools such as contracts, insurance, hedges, options/derivatives, etc. are also essential. These are again largely non-existent in the current markets.

Currently, short-term trading constitutes only 3 per cent of the total energy market. Power markets generally operate with power purchase agreements for long-term trading and bilateral contracts for the short term.

For very short-term requirements, there is the unscheduled interchange (UI). In the future, these markets will be complemented by the exchange which will offer standard contracts, nationwide choice, better prices and payment security.

However, the exchange will have to run parallel to the bilateral route, unlike other countries where bilateral markets are closed down with the establishment of a power exchange.

In tracing the regulatory background of power exchanges in India, it can be seen that the Electricity Act, 2003 has mandated that an appropriate commission should endeavour to promote the de­velopment of the power market. The National Electricity Policy has also mandated enabling regulations for interstate and intra-state trading to be notified by the central regulator.

The CERC issued guidelines in February 2007 granting permission for the setting up and operation of a power exchange. The guidelines include a de-mutualised form of organisation; ring-fencing between ownership, management and participants; a computerised trading and clearing system; an efficient financial settlement and guarantee system; an effective trade information and dissem­ination system; etc.

In March 2007, FTIL and MCX submitted their applications. FTIL is a technology company providing solutions to the financial services industry. MCX was set up in 2003. It is the foremost commodity exchange in the country with a 73 per cent market share. In 2006-07, its average daily turnover was Rs 80 billion. Globally, it is number one in futures trading for silver, number two for natural gas and number three for gold and crude oil. It has a 98 per cent share of the Indian energy market.

PTC India has agreed to become an equity partner and is planning to pick up a 26 per cent stake in the exchange. Some financial institutions, power sector utilities and industrial leaders are also likely to contribute to its equity.

The CERC has accepted most of the features of the proposed model, which is expected to become functional by December 2007 once the proposal is finally accepted.

For trading, all the participants will submit the bids for buying and selling of power to the exchange. It will be a closed double-side auction. Hourly contracts will be undertaken on the basis of portfolio bidding.

Initially, the minimum contract size will be 10 MW because currently the utilities are not equipped to handle a large number of contracts. But gradually 5 MW and 1 MW contracts will also be introduced.

Auctions will be carried out resulting in trade schedules which will be released to the system operators. System oper­ators will finally issue the schedule to all the participants.

Delivery of power will be ensured through existing mechanisms by which bilaterally negotiated contracts are delivered today, that is, through the RLDCs.

Once a contract is scheduled, it will be considered delivered, as practised currently. If the generator defaults, it will be liable to pay UI charges. Transmission charges from the point of injection of power to the interconnection point of the state grid with the regional grid will be borne by the seller.

The price at which the buyers and sellers agree to trade will be a market-determined uniform price. Say there are three players – A, B and C. All of them bid for a particular contract. On the basis of their portfolios, their bids will be plotted on a graph to form a supply and demand curve which will result in a market clearing price. The price calculation algorithm diagram shows players A and B emerge as net buyers at the price of Rs 2.50 per kWh. Player C sells 60 MW, out of which 20 MW is purchased by A and 40 MW by B.

With bids accumulated on a countrywide basis, congestion may happen. To manage this, market splitting has been proposed, for which the country will be divided into five price zones – north, northeast, east, south and west.

There will be two types of members of the exchange. The trading-cum-clearing members (proprietary) such as gener­ators, distribution licensees, HT consumers, etc. will bid and clear on their own. The trading-cum-clearing members (client) such as trading licensees will bid and clear on behalf of other clients. To be eligible, physical participants connected to the state grids will need to get a no-objection certificate from their respective distribution and transmission licensees.

They will have to get open access approved by the state authorities. Mem­ber­­ship fees will include an admission fee, annual fee and the transaction charge which will be around 1 paise per unit.

Margin requirement will have to be fulfilled in the form of collaterals. In the day-ahead market, a 100 per cent margin will be required, and for longer- duration markets, the margin will depend on volatility.

The current bottlenecks include the partly implemented availability-based tariff (ABT) system. Power trading can perhaps occur without intra-state ABT, but the ABT system as a whole and ABT-compliant metering are prerequisites.

Final approval for the exchange can be obtained after Power Grid gives the go-ahead on issues regarding transmission charges, losses, congestion management, reservation of transmission capacity, and the fees to be paid by the exchange to RLDCs.

Moreover, with NTPC also gearing up for a similar exchange, the Indian Energy Exchange will have to prepare itself for competition. NTPC has also sought approval from the CERC. The National Hydroelectric Power Corpo­ration and the National Commo­dity and Derivatives Exchange have given in-principle app­roval to act as its promoters. 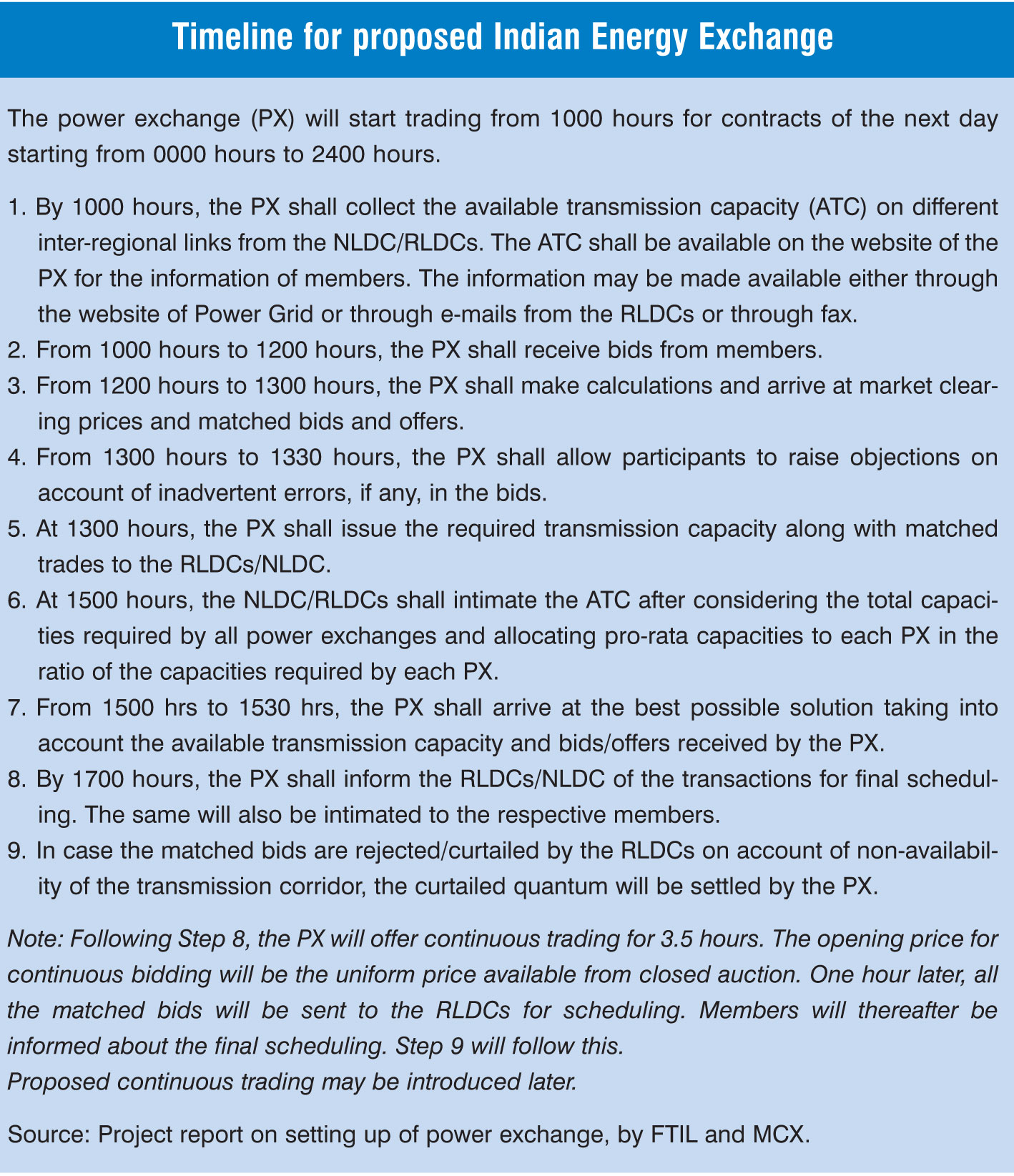