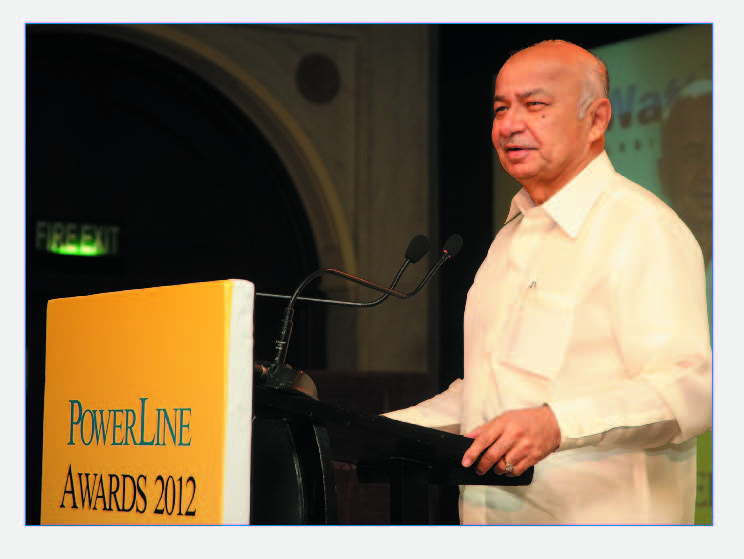 Congratulating the “heroes” of the sector at the Power Line Awards 2012 ceremony, chief guest Sushilkumar Shinde was upbeat about the miles the sector had covered, while noting there were many more to go. He also commended Power Line for recognising and encouraging excellence in the sector by organising the awards. Excerpts from the power minister’s address at the awards function…

After a very long time, everybody from the power sector has gathered at a big event like this. I am happy to be here. This is the second time that I am attending the Power Line Awards. I had attended these awards five years ago and at the time, there was no jury. However, this time, the winners have been determined by a distinguished jury, which has given the process greater credibility. I congratulate all the winners and I am thankful to Mr Alok Brara for arranging this event.

Sometime back, a high level report was sent to the government, which said that the Ministry of Power should be sensitised. I objected to it, saying that, except the prime minister, no one has the right to say that the power ministry should be sensitised. My colleagues and I introspected about where we were failing. We realised that there was no proper monitoring, no system for ordering before the plan period starts and no coordination between the power ministry and other departments.

Today, power is the only segment in the infrastructure sector that has delivered good results. The terminal year target for the Eleventh Plan period was 17,000 MW, but we achieved 20,500 MW. It is all of you who have achieved this feat. When I joined the ministry, private sector participation in generation was just 10 per cent and today, it is over 35 per cent. Over 80,000 MW of capacity is currently under construction.

In the distribution sector, the distribution losses were reported to be Rs 800-Rs 1,000 billion. These were inclusive of losses due to power theft, commercial losses, transmission losses and other losses. At a high-level meeting, I questioned if anyone has tried to look into the separation of distribution losses. It was then decided to appoint the Power Finance Corporation as a third-party agency for examining where these losses were coming from. We are analysing the issue to find out where we are lacking.

The transmission sector has witnessed new inventions. Yesterday, I went to see Powergrid’s 800 kV and 500 kV transmission lines. Powergrid, along with the assistance of 36 companies, has developed a 1,200 kV transmission system. India is the first country in the world to have achieved this. I am proud of my colleagues and all those who have assisted Powergrid in this venture.

Today, non-conventional energy, especially solar, is developing fast and the price of solar power generation has come down. This is in line with the Electricity Act, 2003, which stipulates providing sustainable and cheap power to citizens.

You all are heroes who have worked for these achievements and deserve excellence awards. I am thankful to Power Line for organising these awards for power sector companies and acknowledging their contribution to society. This is good encouragement for those who are new to the sector.

I am quite confident that with the move towards supercritical technology, we will achieve our generation targets. When I came in 2006, everyone was criticising us. At that time, only Bharat Heavy Electricals Limited’s factory was catering to the power sector and it was not possible to meet the generation targets due to the lack of equipment manufacturing capacity. Today, there are new players who have entered the space. We are making all the required efforts to achieve the big targets facing us. Regarding the issue of fuel supply agreements, the prime minister has taken a decision in the matter. Issues related to gas availability will also be worked out soon.

It is a fact that we have seen a change of five power secretaries under one minister. Usually, this does not happen, as it is the ministers who keep on changing while the secretaries remain the same. However, I cannot forget the contributions of each one of the secretaries. As per the system, one has to go after sometime. Tomorrow, I might go somewhere else, but the tradition that has been built by this department will remain.

Although we have achieved several milestones, there is still a long way to go. I am quite confident that if the discoms, and private, state and central utilities work harder, we will achieve more than what we have achieved today.