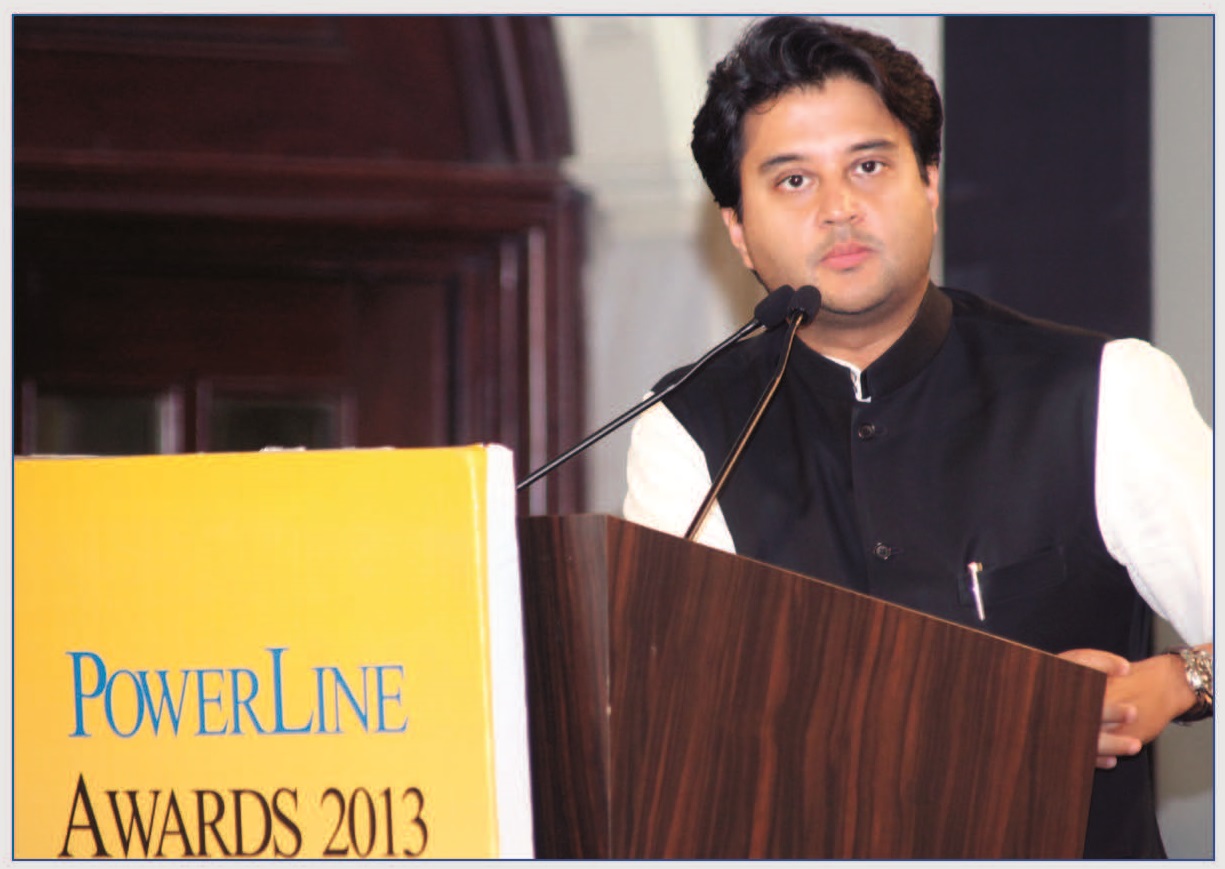 In his address at the Power Line Awards 2013 ceremony, chief guest Jyotiraditya M. Scindia, then minister of state (independent charge) for power, called for imaginative solutions to the sector’s problems. Key among them were imported coal, gas availability, grid disturbances, and discom health. While some of these have been resolved, distribution continues to be the “Achilles’ heel” of the sector, as Scindia said…

There are a number of issues confronting the sector, but in challenge lies the opportunity. A robust power sector is fundamental to the development of any economy. India’s economic cycle is determined to a large extent by the power sector – about 40 per cent of the required investments in infrastructure are directly or indirectly related to this industry.

There are problems facing the sector, but I believe these are surmountable. We have travelled a long way. In 1947, when India gained independence, we had a capacity of only 1,650 MW. During 1947 to 1992, the installed capacity increased to 66 GW, and in the past 20 years, this has grown to almost 230 GW. In the Eleventh Plan, we added about 55 GW of capacity, which is more than the combined capacity addition during the Eighth Ninth and Tenth Plan periods. For the Twelfth Plan, the capacity addition target has been set at 88 GW. In 2012-13, against a target of 16,500 MW, we achieved a capacity addition of 20,000 MW. But the question remains – is this enough? While today we have an installed capacity of about 230 GW, the demand is expected to increase to 400 GW by 2022 and to 800 GW by 2032. We are looking at an increase of four times in generation capacity and this is the challenge we need to rise to.

The cabinet has approved the pass-through proposal for imported coal, which would benefit about 78,000 MW of capacity commissioned after 2009. Three ministries – the Ministry of Finance, the Ministry of Coal and the Ministry of Power – have worked together to find the optimal solution. As per the proposal, Coal India Limited’s (CIL) commitment would be 60 per cent of the annual contracted quantity in the first year, which would increase to 65 per cent, 70 per cent and 75 per cent in the second, third and fourth years respectively. Independent power producers will have the choice to meet the balance requirements through coal imports or through CIL.

Ensuring gas availability for the sector is a key challenge. However, one needs to find an imaginative solution to the issue. We are working with various agencies to see if we can set aside some gas-powered plants for peaking power supply.

On the regulatory side, the new standard bidding documents (SBDs) for Case II bidding are likely to be released soon. The SBDs for Case I are being reworked to incorporate the pass-through mechanism. Plants aggregating about 17,500 MW will be allowed automatic fuel cost pass-though once PPAs based on the new SBDs for Case I are signed.

In transmission, we have a separate set of challenges. My priority is to ensure the connection of the southern gird to the national grid by January 2014. This project is being monitored closely to ensure the deadline is met. Once completed, we will have a countrywide synchronous grid connecting the northern, southern, eastern and western regions for the first time.

Also, our target is to take the interregional transmission capacity to 66 GW through the addition of 38 GW during the Twelfth Plan period, thereby creating the largest transmission grid in the world. Several regulations have been passed over the past five to six months to avoid grid disturbances and reduce grid volatility. The frequency band has been tightened to 49.9 Hz-50.1 Hz, thereby ensuring a greater level of rigidity in the system. We have also instructed all regional load despatch centres and the state load despatch centres to ensure conformance to rules and regulations.

The distribution segment, which I believe is the Achilles’ heel of the power sector, needs maximum attention. We have come out with an innovative financial restructuring plan (FRP) for taking over about Rs 1.4 trillion of outstanding short-term liabilities of the state discoms. Bihar, Andhra Pradesh, Kerala, Karnataka, Haryana, Uttar Pradesh and Tamil Nadu have opted for the scheme, with Tamil Nadu being the first state to almost complete its bond offer. Banks have agreed to keep the interest rates on transitional financing at below 9 per cent levels to ensure the financial viability of discoms. If the FRP is successful in bringing about a transformation in the distribution segment, we would be able to resolve one of the major issues confronting the sector and the entire value chain.

Inter-ministerial issues have been highlighted as a major challenge. We have worked closely with the coal and environment ministries on a quarterly basis to address these challenges. I am pleased to report that by working with the Ministry of Environment and Forests, we have been able to secure several approvals for the transmission and generation segments.

I firmly believe that India’s economic resurgence or dominance is predicated on the success of the power sector. Ideation is important, but more important to guarantee success is execution.