CGPL operates the 4,000 MW Mundra ultra mega power project (UMPP) in Gujarat. The UMPP, comprising five units of 800 MW each, entailed a cost of Rs 170 billion, and the units were successively commissioned between 2012 and 2013. The Mundra UMPP supplies electricity to eight discoms in five states – Gujarat, Rajasthan, Maharashtra, Haryana and Punjab.

Tata Power had been looking to refinance CGPL’s debt for quite some time. Earlier, it was anticipated that the company would do so under the Reserve Bank of India’s (RBI) 5/25 Scheme. However, the refinancing has actually been executed under RBI’s scheme announced in August 2014, which allows changes in loans at competitive rates and extended tenors. RBI’s debt refinancing schemes have witnessed good participation from the power sector. However, lenders must take care to ensure that debt repayment is aligned with project cash flows, as pushing a major portion of debt obligations to the latter part of the project life may lead to unwarranted risks.

As per Tata Power’s filing with the Bombay Stock Exchange, “The refinancing has been done under RBI’s circular dated August 7, 2014, as per which a minimum of 25 per cent of the outstanding loans have to be refinanced through new lenders. The refinancing scheme will help in extending the tenor of the rupee facility and reducing the interest cost for CGPL. The total interest savings will be 2 per cent (about Rs 770 million per annum) on Rs 38.64 billion of refinancing.”

In line with RBI’s regulations, CGPL roped in Axis Bank as a new lender to the existing rupee lenders’ consortium, pursuant to the refinancing exercise. The consortium is led by the State Bank of India (SBI). The other lenders in the consortium include India Infrastructure Finance Company Limited (IIFCL), Oriental Bank of Commerce, Vijaya Bank, State Bank of Hyderabad, State Bank of Bikaner and State Bank of Travancore. 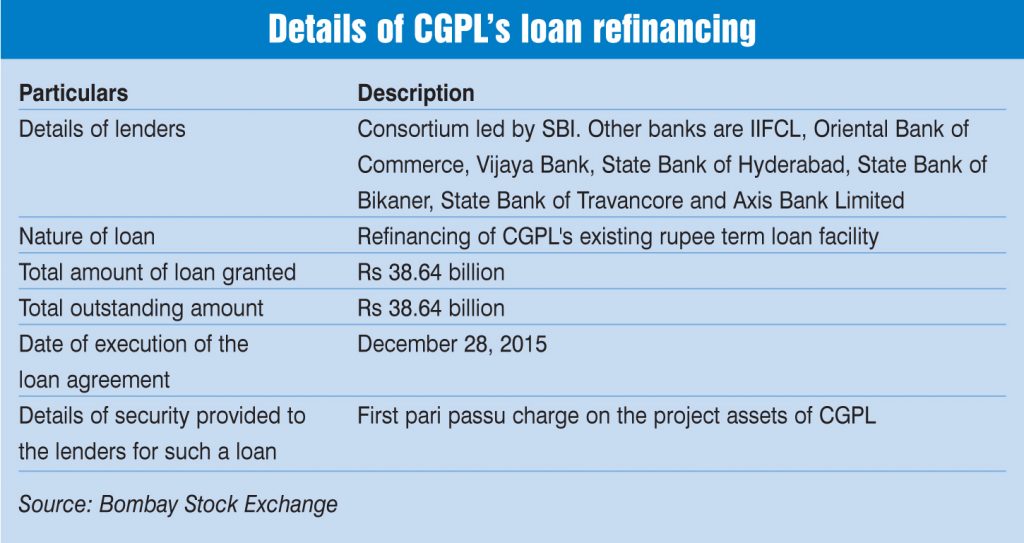 The Mundra UMPP is currently facing certain challenges owing to the under-recovery of imported coal costs, which adversely affected its financial performance. However, Tata Power has been taking steps to contain losses and reduce the cost of debt servicing. This move is gradually paying off. Overall, Tata Power’s leverage had improved in 2014-15 vis-à-vis 2013-14. On a stand-alone basis, its debt-equity ratio stood at 0.58 in 2014-15 as against 0.71 in the previous fiscal. On a consolidated basis (without minority interest), the debt-equity ratio stood at 2.58 (with impairment) and 2.17 (without impairment) in 2014-15, as against 2.90 and 2.45 respectively in the previous year.

Meanwhile, CGPL’s revenue stood at Rs 59.82 billion in 2014-15, recording an increase of 6 per cent over Rs 57.12 billion in the previous year. The growth in revenue can be attributed to an increase in energy sales by over 11.5 per cent during the year. CGPL sold 24,502 MUs in 2014-15 as against 21,972 MUs in 2013-14. Meanwhile, the loss after tax declined significantly by 40 per cent, from Rs 14.92 billion to Rs 8.98 billion in the year ended March 2015. This was owing to better operational performance, declining coal prices in the international market and lower depreciation.

Due to unexpected changes in Indonesian coal export regulations, CGPL cannot recover the full cost of imported coal through the current tariff structure. The company had approached the Central Electricity Regulatory Commission to grant relief in the form of compensatory tariff to offset the losses. However, the order was challenged by the procurers (discoms) and the issue is currently pending in the Appellate Tribunal for Electricity.

Going forward, the expeditious resolution of the compensatory tariff issue is crucial for Tata Power. The company has been making efforts to mitigate the losses through better operational performance and controlling its interest costs by accessing cheaper funds.