There is little doubt about the importance of electricity for economic and social development. With a large part of the global population still living without access to electricity, governments around the world are investing in infrastructure to help deliver electricity to unelectrified or poorly connected areas. In this context, microgrids offer a practical solution to supply reliable power in these areas. They are also becoming an increasingly attractive option in cities where conventional grid power is unreliable.

Microgrids have already started to make a difference in various parts of the world with several companies developing and implementing microgrid technologies that provide quality power while reducing greenhouse gas emissions by integrating more renewable energy.

Marble Bar is a town and rock formation in the Pilbara region of north-western Australia. The microgrid project was installed in 2010, with ABB providing a turnkey solution. It is one of the world’s first utility-scale, high-penetration photovoltaic (PV) diesel power stations, which includes a solar PV plant, a diesel generation plant, flywheel-based power storage, and integration and control solutions. The Marble Bar power station consists of four 320 kW diesel generator sets and a 300 kW solar array. The system utilises 2,000 solar modules and a single-axis solar tracking system that follows the path of the sun throughout the day. The capacity of the power storage flywheel is 500 kW.

When the sun is shining, the system ensures that the maximum solar energy is fed into the network and significantly reduces diesel generation. When the sun is obscured, the system covers for the loss in solar generation by ramping up diesel generation, so that the network has uninterrupted energy supply. The system supplies Marble Bar and Nullagine with close to 60 per cent of their average daytime energy through solar generation, saving approximately 400,000 litres of diesel and 1,100 tonnes of greenhouse gas emissions each year.

Marsabit is an oasis town at the edge of the desert in a windy area of northern Kenya, located at a distance of 500 km from the country’s capital Nairobi. In absence of connectivity to the national grid, about 5,000 people residing in the town are supplied electricity through a microgrid installed by Socabelec East Africa Limited. The grid system includes diesel generators and two wind energy turbines of 275 kW capacity each.

In September 2015, Socabelec East Africa placed an order with ABB to design, supply and install 500 kW flywheel-based microgrid stabilisation solution to help stabilise the power supply from the wind/diesel hybrid plant. The primary purpose of the system is to stabilise and protect power systems against fluctuations in frequency and voltage. It can inject or absorb power up to its nominal rating, and help integrate intermittent renewable energy into the grid, so customers can operate their hybrid plants in an optimal way. ABB’s containerised stabilisation system will be integrated into the existing power network and will interface with the existing diesel power station controls. The project, scheduled for completion in 2016, will be the first flywheel storage project in Kenya.

New Zealand’s Scott Base and the US’s McMurdo Station in Antarctica are both important research bases and home to about 1,200 people in the Antarctic summer. The microgrid system here consists of diesel generators (9×125 kW) and wind turbines (3×330 kW) along with a flywheel storage system and a frequency converter.

The integration of wind energy has led to a reduction of around 463,000 litres in diesel per year for power generation, and avoided 1,242 metric tonnes of CO2  emissions per year. It has also reduced the risk of damag to the environment on account of the transportation and storage of such high quantities of diesel. The frequency converter interconnects the Scott and McMurdo bases, which operate at different frequencies – 50 Hz (New Zealand) and 60 Hz (USA) – thus allowing power flow in both directions.

Kodiak Island, off Alaska’s south coast, is the second largest island in the US with a population of around 15,000. The Kodiak Electric Association operates a microgrid that generates all of its 28 MW of electricity from hydropower and wind. The system also incorporates two 1 MW grid stabilisation generators that are based on a spinning flywheel with inverters to store short-term energy and inject both real and reactive power into the microgrid. It provides voltage and frequency support while managing the intermittencies from the 9 MW wind farm. The system reduces the stress on the battery systems and helps in extending the life of the batteries by up to six years. The system enables up to 100 per cent usage of renewable energy and facilitates its integration into the microgrid while ensuring a high level of grid stability.

Nyrstar, an integrated mining and metals company, generates energy for its El Toqui zinc-gold mine in southern Chile with a hybrid power system. The system consists of four diesel generators (totalling 5.6 MW), six small wind turbines (1.5 MW), and two hydropower generators (2.3 MW). An additional hydro generator (1.9 MW) is planned. The wind turbines led to instability in the system owing to power fluctuations. The fluctuations were causing large frequency variations and power despatch issues due to generator over- and under-loading.

The diesel generators and hydropower turbine generators could not cope with the rapid changes in power output. Wind power was limited to 1.3 MW to avoid instability issues and the wind turbines had to be switched off occasionally, resulting in a large amount of excess energy not being utilised on the one hand and fossil fuel consumption increasing on the other.

To integrate the diesel, wind and hydro generation, grid stabilising and controller systems have been installed. These systems help in reducing wind power fluctuations and increasing the energy yield by about 29 per cent.

An integrated solar-diesel microgrid is being installed at ABB’s Longmeadow headquarters in Johannesburg, South Africa. The 96,000 square metre facility houses medium voltage switchgear manufacturing and protection panel assembly facilities with around 1,000 employees. The system includes a rooftop solar PV plant and a grid stabiliser that will help maximise the use of clean solar energy. Due to rampant blackouts and load shedding, the industry has had to incur additional cost for diesel back up and suffer lower productivity. This is a problem across all industries. The microgrid system will ensure uninterrupted power supply to keep the facility running even in the event of a power outage in the main grid supply. 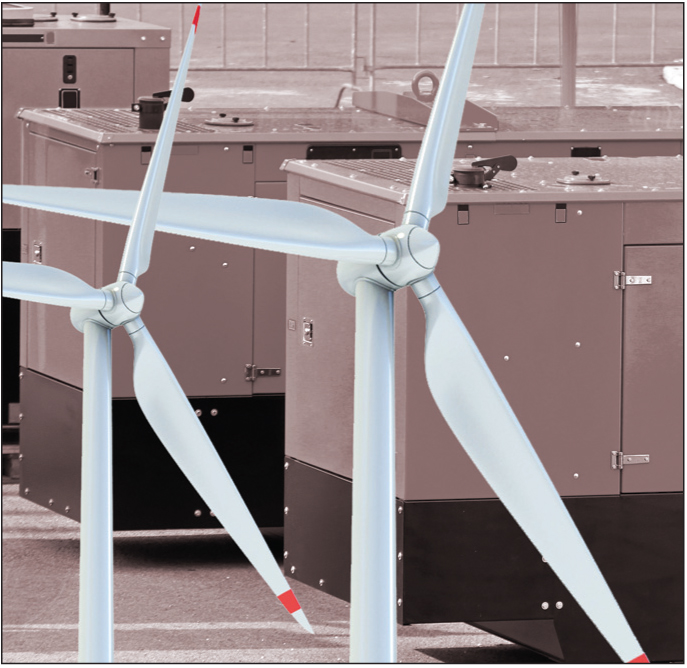 In addition to the existing backup diesel generators, a 750 kW rooftop PV plant, including an inverter and a 1 MVA/380 kWh battery-based grid stabiliser, is being installed. It is estimated that the system will lead to a reduction of over 1,000 tonnes of CO2 emissions annually. The system is expected to be completed in early 2016.

Microgrids are extremely important in not just enabling access to electricity in unconnected areas but also in complementing the grid. They enable higher and easier integration of renewable energy, lower levelised cost of electricity, reduce the dependence on fossil fuels, and lead to lower CO2 emissions. Microgrids with automation and controller systems help in controlling power fluctuations, thereby maintaining system balance and maximising the integration of renewable energy sources. A range of technologies is available for off-grid applications, commercial and industrial facilities and grid-connected systems, as highlighted in the cases discussed above.

Owing to the benefits they offer, the microgrid market is developing rapidly, with deployment around the world in a variety of application segments. Microgrids are shifting their focus from technology demonstration pilot projects to commercial projects, driven by strong business cases. However, their potential has not been explored fully, especially in developing markets such as Africa and India, where the majority of the unelectrified population lives.