Inadequate tariffs have been identified as the key reason for the weak financial position of the discoms. The interference of the state governments in tariff determination has been responsible for tariffs not being cost-reflective. While the cost of power purchase has been going up due to various factors, the growth in tariffs has not been commensurate. Over the years, distribution reforms have aimed to address this issue, but no concrete steps have been taken thus far.

In November 2011, the Appellate Tribunal for Electricity (APTEL) came out with a ruling directing the state electricity regulatory commissions (SERCs) to notify suo moto tariff orders if their respective discoms failed to file their annual tariff petitions. The order mandated the SERCs to conduct timely annual performance reviews; ensure the regular filing of aggregate revenue requirements (ARR) by discoms and tariff determination; remove gaps in the ARR; and implement the fuel cost pass-through mechanism in the ARR through which adjustments can be done on a monthly basis. Following the  APTEL ruling, tariff revisions have become more regular, but are still insufficient for covering the costs of discoms.

Post the APTEL ruling, almost all states undertook tariff revisions during 2012-13, with the hikes ranging from 1.5 per cent to 37 per cent. Tamil Nadu, Kerala, Delhi and Andhra Pradesh recorded tariff hikes of over 20 per cent. In doing so, Tamil Nadu and Kerala were revising their respective tariffs after almost a decade.

During 2013-14, about 24 SERCs/joint electricity regulatory commissions undertook tariff revisions. The average hike ranged from 0.60 per cent (Madhya Pradesh) to 26 per cent (Uttar Pradesh) in the case of domestic tariffs, and 2 per cent (Madhya Pradesh) to 20 per cent (Himachal Pradesh) in the case of high tension (HT) industrial tariffs. Taking a cue from APTEL’s directive, the Uttar Pradesh Electricity Regulatory Commission initiated suo moto proceedings for determining the ARR and tariff of the state’s distribution licensees. In 2013-14, the average domestic tariff in Chhattisgarh and West Bengal remained unchanged after revision, while the same recorded a decline in Tamil Nadu and Kerala. Meanwhile, in a regressive step, the state governments of Delhi, Haryana and Maharashtra announced tariff cuts as post- and pre-poll sops.

As it was an election year, most states undertook modest or no tariff revisions in 2014-15, with the overall average tariffs increasing by 9 per cent. There were wide variations between the approved distribution losses and the actual losses. The actual losses across a majority of the states also remained higher than the trajectory approved by the SERCs. A variation of 5-15 per cent was seen in the state utilities of Odisha, Haryana and Uttarakhand.

In 2015-16, the tariff hikes have been modest, barring a few states. The average increase is estimated to have been around 4 per cent (the same was 9 per cent in 2014-15 and 7 per cent in 2013-14). Out of 24 states where SERCs issued tariff orders for financial year 2016, SERCs in six states did not approve any tariff revision for their distribution utilities. These states are Punjab, Assam, Arunachal Pradesh, Jammu & Kashmir, West Bengal and Delhi. Meanwhile, the Maharashtra Electricity Regulatory Commission lowered tariffs by 5.7 per cent. 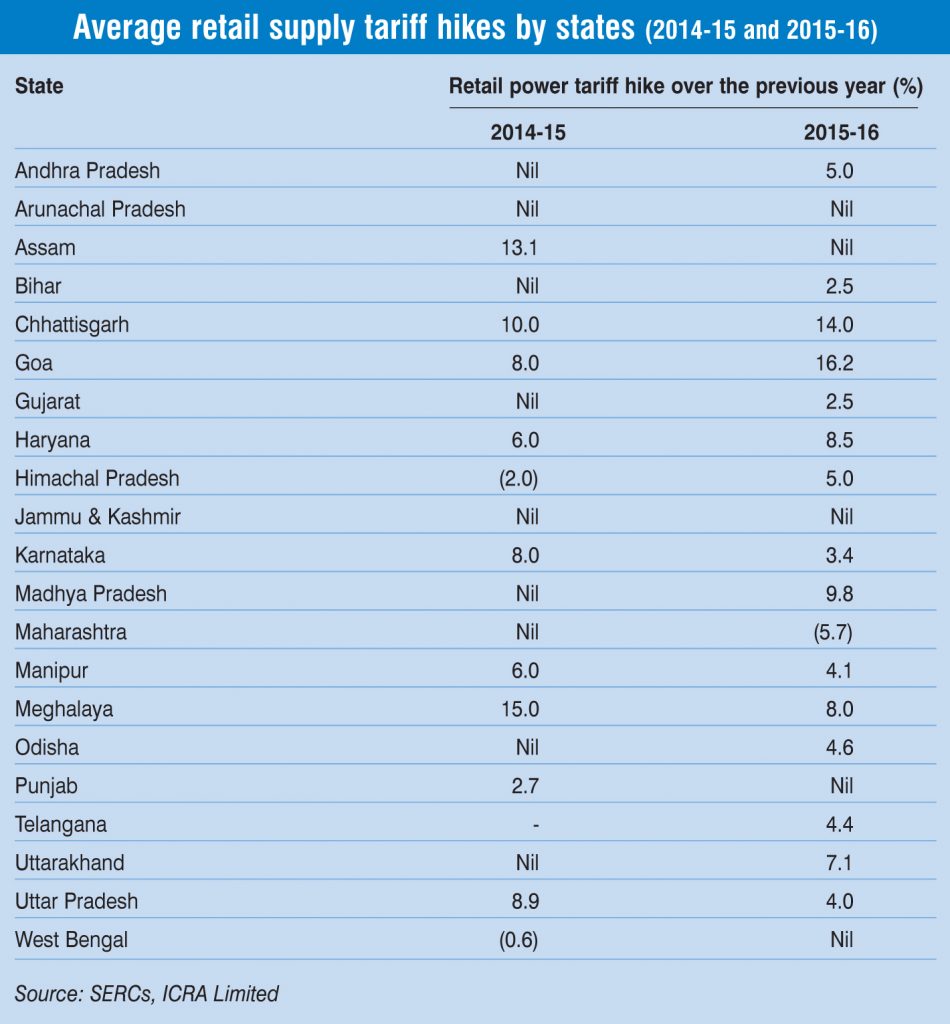 As per Power Line Research, the all-India average domestic tariffs stood at Rs 4.40 per kWh for 2015-16. The average commercial tariff was Rs 6.58 per kWh while the average industrial tariffs were Rs 5.75 per kWh and Rs 5.63 per kWh for HT and low tension customers respectively. Agricultural tariffs were the lowest, with an average of Rs 2.80 per kWh during 2015-16. The high cross-subsidisation of agricultural tariffs has made an impact on other categories, especially industrial and commercial.  The average tariffs for all the categories mentioned above are the average energy charges and do not include the fixed charge component.

Power purchase costs account for 70-80 per cent of distribution utilities’ total cost of service. As such, these play a key role in tariff determination. As per analysis by Power Line Research, the power procurement costs of discoms have increased at an average compound annual growth rate of about 13 per cent between 2010-11 and 2014-15. A number of discoms have shown an increase of 20-30 per cent in their power purchase costs during this period. On an average, the per unit procurement cost increased from Rs 3.58 per kWh in 2012-13 to Rs 3.59 per kWh in 2013-14 and further to Rs 3.71 per kWh in 2014-15.

However, there are wide variations in the power purchase costs of discoms. Utilities in states like Himachal Pradesh, Jammu & Kashmir and Uttarakhand have very low power purchase costs, ranging from Rs 2.40 per kWh to Rs 2.70 per kWh, because of the ample availability of cheap hydropower in these states. Meanwhile, Delhi discoms – Tata Power Delhi Distribution Limited, BSES Rajdhani Power Limited and BSES Yamuna Power Limited – have power purchase costs of Rs 4.50 per kWh or higher. They have contracted power at high rates in order to meet Delhi’s ever-increasing peak demand levels.

Fuel costs are an important determinant for power purchase costs. The cost of linkage coal has generally increased in line with inflation, and this trend is expected to continue for the next few years. One factor that has been increasing the power purchase costs of discoms in the past few years is the increasing share of imported coal in the fuel mix. The growth in domestic coal production, both by Coal India Limited and captive coal blocks, is expected to reduce the dependence on imported coal and bring down costs. Moreover, global coal prices have been declining constantly and currently stand at around $50 per tonne. This will reduce the generation cost of plants operating on imported coal and bring down power purchase costs. However, the gains could be offset to some extent by the recent depreciation in the rupee against the dollar.

The aggressive bidding in the coal block auctions, where all winning bidders quoted negative price bids, implied that they would not be able to charge any fuel costs for supplying to state distribution utilities. This is expected to result in a reduction in power procurement costs and lead to tariff relief for consumers. As the power generation projects of winning bidders have power purchase agreements with distribution utilities in states like Madhya Pradesh, Chhattisgarh, West Bengal and Odisha, the average tariff relief has been estimated at about 0.9 per cent for consumers in these four states by 2016-17.

ARR filings by distribution utilities for the year 2016-17

A number of distribution utilities have filed tariff petitions for 2016-17 with their respective SERCs. Although the final tariff orders are yet to be issued, a look at their ARRs gives a sense of the kind of increase that can be seen in 2016-17.

The distribution utility of Punjab, Punjab State Power Corporation Limited, has an existing average tariff of Rs 5.78 per kWh. Based on its ARR, its average cost of supply for 2016-17 would be Rs 6.92 per kWh. Filling this gap will require a 20 per cent tariff increase, which seems unlikely given that the state has had a maximum tariff increase of 11 per cent since 2012-13.

Both the distribution utilities of Haryana have a big gap between the tariff and the average cost of supply (ACS). While the gap is 16.5 per cent for Uttar Haryana Bijli Vitaran Nigam, it is 32.5 per cent for Dakshin Haryana Bijli Vitaran Nigam. A major tariff hike will be required to close this gap. Haryana has been regular in revising its tariffs, increasing them by 19 per cent and 13 per cent in 2012-13 and 2013-14 respectively.

For Andhra Pradesh’s discoms, the gap between the revenue at current tariffs and the ACS is estimated to be around 9 per cent for 2016-17. The state’s ACS is around Rs 5.60 per kWh. It is not expected to undertake a major tariff hike during the year.

The ACS for Madhya Pradesh is estimated to be Rs 6.24 per kWh for 2016-17, while the average current tariff is Rs 5.21 per kWh. To bridge the gap, a tariff increase of 20 per cent would be required. However, this kind of increase does not seem plausible considering previous tariff revisions in the state.

Gujarat is among the few states with no gap in the ACS and realised revenue; hence, its discoms are profitable. A similar situation is projected in the tariff petitions filed by the state’s distribution utilities, and only a moderate tariff increase is expected.

Uttarakhand, in its multi-year tariff petition, has computed a 25 per cent tariff increase of Rs 1.12 per kWh to recover the gap.

Despite the high gap levels, Odisha’s discoms have not shown any requirement for increasing tariffs in their ARRs. This is on account of the subsidy that will be provided to the discoms by the government.

A caveat regarding the tariff petitions is that they do not take into account the changes brought about by the Ujwal Discom Assurance Yojana. Since discom debt will be taken over by the state governments, a substantial reduction is expected in their interest liabilities, which will affect the ARRs. There could be a potential change (reduction) in the ARR of discoms, which will be considered by the state regulators while approving the tariffs.

The gap between the average cost to serve and the average revenue realised has resulted in the poor financial health of distribution utilities. Although the gap has been declining over the years, it was still Re 0.73 per kWh in 2013-14 as per Power Finance Corporation’s latest estimates. The gap was Re 0.94 per kWh in 2011-12 and Re 0.85 per kWh in 2012-13.

While industry experts believe that cost-reflective tariffs will be key in mitigating the financial stresses of discoms, the central government’s stance is that a tariff increase is not the only solution. It is of the belief that the inefficiency of discoms should not be passed on to consumers. In its recent tariff policy amendments, the government has identified a range of measures to reduce power purchase costs for discoms, which will result in the availability of 24×7 power to consumers at affordable tariffs.