India is the largest consumer and second-largest producer of sugar after Brazil. The Indian sugar industry is a key driver of rural development, and one that has been supporting economic growth. The country has over 682 installed sugar factories, mostly in Uttar Pradesh, Maharashtra, Karnataka, Gujarat, Tamil Nadu and Andhra Pradesh. Most of them are self-sufficient in terms of meeting their energy requirements as they have cogeneration power plants, which use the by-product of bagasse as fuel. These sugar mills sell surplus power to discoms as well, thus giving them an incentive to take energy efficiency initiatives.

A look at some of the initiatives taken by leading sugar companies, which have been recognised by the Bureau of Energy Efficiency…

KCP Sugar and Industries Corporation Limited is one of India’s oldest sugar mills. It has two sugar manufacturing units aggregating a capacity of 13,000 tonnes of cane crushed per day (tcd) in Andhra Pradesh’s Vuyyuru and Lakshmipuram regions. At these facilities, it has two cogeneration power plants aggregating 20 MW.

The Vuyyuru unit has a crushing capacity of 8,500 tcd and a cogeneration unit of 15 MW. It also has a distillery with a capacity of 50 kilolitres per day. The plant has been designed to produce bio-ethanol in line with government policy and meet the target of reducing crude oil imports and saving foreign exchange. The unit was also registered for carbon credits in 2008.

An important initiative on its part was the replacement of the old conventional drier system with a fluidised bed drier system. This entailed an investment of Rs 39.23 million and led to energy savings of 0.29 million units and monetary savings of Rs 1.03 million per annum. It also invested Rs 0.9 million in reducing the feed water pump delivery pressure from 64 kg per cm2 to 60 kg per cm2; thereby achieving steam savings of 0.45 tonnes per hour. As a result, 3,000 million tonnes (mt) of fuel were saved, along with annual monetary savings of Rs 3.75 million.

Some other initiatives it took to save energy and achieve efficiency included the replacement of the raw juice and imbibitions water batch weighing scales with flow meters, the modification of the draft measuring transmitters to minimise signal noise and disturbance, the installation of suitable capacity pumps in place of higher capacity pump at the cogeneration plant, the installation of lotus top rollers for the last mill, the automation of all batch plans, common condensate pumping, the replacement of all inefficient worm gears with planetary gears and a helical gearbox, and the extensive use of energy-efficient motors.

EID Parry (India) Limited, headquartered in Chennai, is a flagship company of the diversified Rs 269 billion Murugappa Group. It is one of the top five sugar producers in the country. EID Parry, along with its subsidiaries, has nine sugar plants spread across south India, of which four are in Tamil Nadu, one in Puducherry, three in Karnataka and one in Andhra Pradesh.

Commissioned in 2000, the Pudukkottai unit is the company’s greenfield project; it has a cogeneration capacity of 18.55 MW. The unit undertook a number of energy conservation initiatives during 2013-14, which helped lower its specific thermal energy consumption by 16.87 per cent (compared to 2012-13) to 2.76 million kCal per tonne of sugar. Meanwhile, its specific electrical consumption reduced by 9.80 per cent to 267.65 kWh per tonne of sugar.

A key initiative was the introduction of a plate-type heat exchanger to heat the raw juice between the vapour line heater and primary juice heater. By doing this, the raw juice temperature increased from 50 0C to 68 0C before it entered the primary juice heater. The evaporator condensate temperature also reduced from 96 0C to 70 0C. With this modification, the unit saved 1.6 per cent of steam on cane crushes. This totalled 10,497 tonnes of steam, resulting in bagasse savings of 3,181 mt. 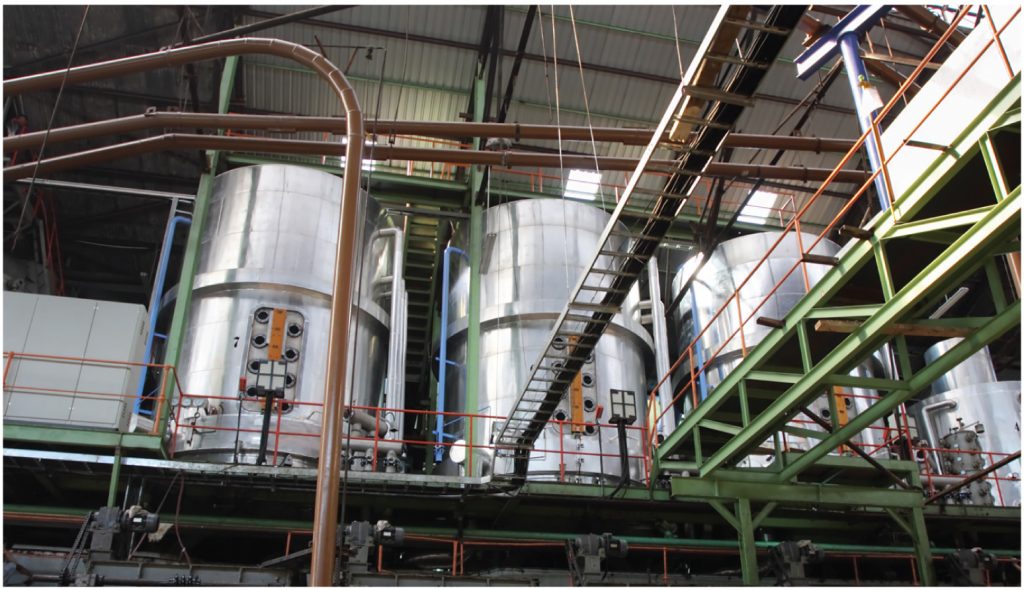 Its second major initiative was the modification of the juice heaters’ condensate siphon piping and its connection to the common condensate tank. All condensates were pumped to the overhead tank through a common pump, because of which the unit eliminated two 5.5 kW condensate pumps.

The unit also provided an E melt boiler for melting sulphur, which led to the elimination of 9 atmosphere absolute (ata) steam from the turbine extraction. A total of 9,841 tonnes of 9 ata steam reduction was achieved, along with bagasse savings of 3,307 mt.

During the sugarcane crushing process, the unit was initially using only bagasse as boiler fuel. During boiler operations, a spreader had to run to avoid damage to the spreader rotors, even though no coal feeding was being done. Since the spreaders were connected to constant speed motors, it was running on 1,440 rpm and consuming 3.3 kW per hour per spreader. As an energy-saving measure, the variable frequency drive of the coal drag chain feeders (lying idle as no coal was being used) was connected to the coal spreader motors. This reduced the speed to 300 rpm and led to power savings of 2 kW per hour per spreader.

Some other initiatives it undertook to conserve energy were optimising the usage of the air-cooled condenser fans, optimising the operations of the feed water transfer pumps by recovering maximum exhaust condensate from sugar processes, and introducing direct piping to the de-aerator from the evaporator.

The rising cost of raw materials has put pressure on the margins of sugar producers. This has been a key driver for sugar mill owners to introduce energy conservation initiatives for reducing costs and generating additional revenue. The case studies highlight that a significant amount of energy can be saved through basic initiatives like common condensate pumping, and the extensive use of energy-efficient motors, pumps and gears.