The Central Electricity Regulatory Commission (CERC) recently issued draft regulations defining the structure for the exchange of energy saving certificates (ESCerts) on the power exchanges. The CERC (Terms and Conditions for Exchange of Energy Savings Certificates) Regulations, 2016 come at a crucial time, with the central government gearing up to launch the second cycle of the Perform, Achieve and Trade (PAT) scheme in April 2016. Experts believe that the success of the second cycle and the investments made in energy savings by designated consumers (DCs) depend on the smoothness of the ESCert trading process for the first cycle.

The Indian government introduced the ambitious PAT scheme in 2012 under the National Mission for Enhanced Energy Efficiency. It was aimed at establishing a market-based mechanism to enhance the cost-effectiveness of improvements in energy efficiency in large energy-intensive industries. Accordingly, the Energy Conservation Act, 2001 was amended in August 2010 to give the central government powers to issue ESCerts under PAT.

When a DC achieves and surpasses its targeted energy savings, it is permitted to sell excess savings in the form of ESCerts. A DC that fails to achieve its savings target is required to purchase the appropriate number of ESCerts from the power exchanges to cover the gap.

Under this mechanism, the monitoring and verification of energy savings is conducted by accredited energy auditors through a transparent system prescribed under the PAT Rules, 2012. The first PAT cycle, which began on April 1, 2012 and ended on March 31, 2015, included a total of 478 DCs across eight industrial sectors. The second PAT cycle is slated to commence from April 2016 and extend till March 2019. The government is aiming to expand the coverage of the scheme’s second cycle by adding units under the eight industrial sectors as well as by including more sectors.

Under the first cycle, the power traded through ESCerts is expected to be somewhere between 7 per cent and 10 per cent of the total energy savings target of about 6.686 million tonnes of oil equivalent. This should be enough to ensure dynamic and competitive trading, thereby leading to the robust price discovery of ESCerts.

In order to operationalise ESCert trading, the Ministry of Power had directed the CERC in January 2016 to issue the necessary regulations/guidelines for developing the ESCert market and facilitating its trade on the power exchanges.

The draft regulations propose to designate the Bureau of Energy Efficiency (BEE) as the administrator of ESCerts. In this role, the BEE will issue a detailed procedure for registering eligible entities as well as for the exchange, transfer, banking and extinguishment of ESCerts and other residual matters. It will coordinate with the power exchanges and Power System Operation Corporation Limited (POSOCO) for creating a smooth interface for the exchange of ESCerts.

The BEE’s responsibilities will include defining procedures for interface activities between various stakeholders, including the power exchanges, POSOCO, DCs and the BEE. It will assist the CERC in matters involving the trade of ESCerts on the power exchanges. It will also be responsible for disseminating relevant market information to all stakeholders and ensuring transparency in the entire process.

The CERC is proposing to appoint POSOCO as the registry for ESCerts, given the organisation’s vast experience in renewable energy certificate trading and the management of the integrated operations of regional and national power systems with reliability, security and economy. POSOCO will also be responsible for providing guidance on the process of ESCert trading/exchange; coordinating and disseminating information among all stakeholders; and assisting in the development of an IT platform and hardware infrastructure for maintaining an ESCert database and trading records.

The draft regulations state that the denomination of the ESCerts will be as per the Energy Conservation Rules, 2012. Thus, the value of one ESCert will be equal to the energy consumed in terms of 1 metric tonne of oil equivalent. The price of the ESCerts will be discovered through the competitive forces of demand and supply on the power exchanges. The certificates, issued in a cycle period (three years), will be valid till the end of the compliance period of the next cycle.

ESCerts offered on the power exchanges will be categorised by the BEE on the basis of the year and cycle of issuance with the approval of the CERC. DCs will be issued ESCerts in electronic form in a cycle period for achieving a specific energy consumption that is less than that notified in the norms and standards under the Energy Conservation Rules, 2012. DCs whose specific energy consumption is more than the prescribed standards will be entitled to purchase ESCerts to comply with the norms and standards prescribed under Clause (g) of Section 14 of the Energy Conservation Act, 2001.

New products related to ESCerts may be introduced by the power exchanges in consultation with the BEE and with the prior approval of the CERC. Any other eligible entity, as permitted in the Energy Conservation Act, 2001 and on subsequent intimation by BEE to the commission, will be allowed to enlist for participating in the trading of ESCerts on the power exchanges by the CERC.

The energy consumption targets will be set by the Government of India in consultation with the BEE under Section 14(a) of the Energy Conservation Act, 2001. 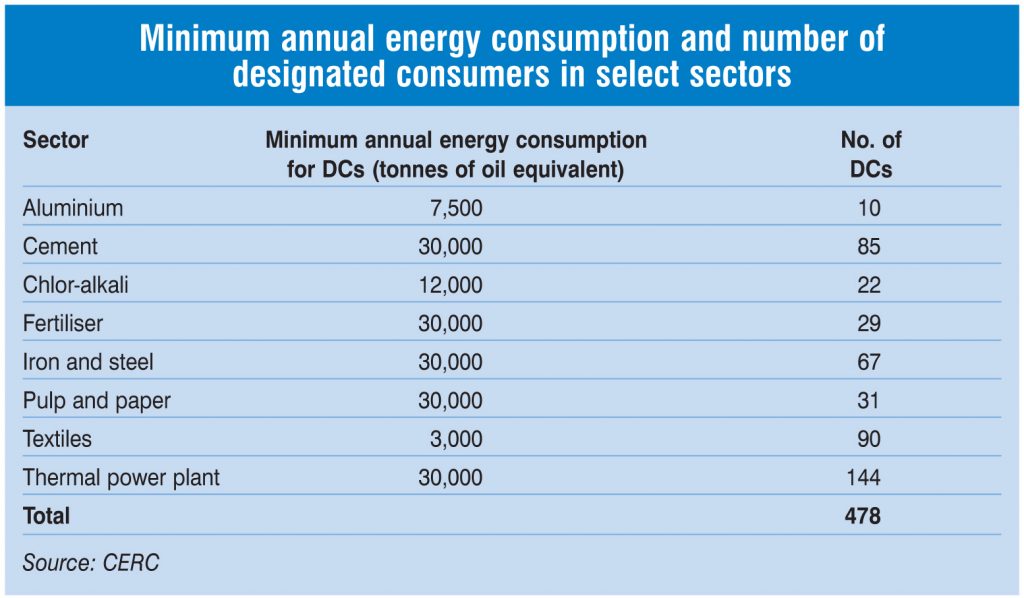 For restricting the excess sale of ESCerts in any exchange session by eligible entities, POSOCO will cross-check the cumulative sale bids placed on the exchanges with the availability of ESCerts. In case a breach of this sub-regulation is noticed, the registry will intimate the power exchanges to treat such entities as defaulters. The bids submitted by defaulting entities will not be considered for the purpose of price discovery. They will become void and ineffective if the total bids submitted by the eligible entity on both exchanges are more than the available ESCerts in the registry account. Eligible entities that register more than three cases of default in a cycle will be barred from the exchange of ESCerts for a period of six months.

The CERC’s draft notification has been welcomed by stakeholders as it defines the basic framework for trading ESCerts. It identifies the role of key entities and also provides a mechanism for issuing and dealing with them. However, going forward, the government needs to provide greater clarity and put in place sufficient checks and balances to ensure the success of the ESCert market.