India has adopted a comprehensive approach for increasing its renewable energy generation capacity to 175 GW by March 2022. The target includes about 60 GW of wind power. Traditionally, investments in the transmission network for the integration of renewables have not been able to keep pace with the growth in installed wind capacity due to various regulatory, technological and developmental issues. With growing concerns regarding the adverse impact of limited evacuation and transfer capacity on the growth of the wind energy segment, policymakers and regulators have been making efforts to ensure that transmission bottlenecks are addressed in a timely manner.

So far, delays in the acquisition of right of way and statutory clearances have hindered the expansion of the transmission network. The mismatch between generation and transmission capacity addition has resulted in severe network congestion. Due to this, discoms have sometimes asked developers to shut down operations for a few hours to maintain grid stability. The Indian Wind Turbine Manufacturers Association estimates that several wind farms in the south lose as much as 15 per cent of their total generation due to curtailment, despite having received must-run status from state governments.

The situation is most critical in Tamil Nadu, which has about 33 per cent of the country’s wind capacity. During 2008-09 and 2011-12, the state’s wind energy generation increased manyfold but the transmission network did not receive adequate investments to support the growing generation capacity. This resulted in the sluggish growth of wind energy capacity in the years that followed. During 2012-13 and 2014-15, the state’s wind capacity rose at a compound annual growth rate of less than 2 per cent as compared to the average growth of over 17 per cent during 2008-09 and 2011-12.

Reportedly, about 40 per cent of energy during peak wind season is lost due to power evacuation issues in the state. What makes it worse for developers, whose generated power gets “backed down” due to grid transfer issues, is the fact that they pay roughly about Rs 3.5 million per MW of capacity addition as infrastructure development costs to the state utility. 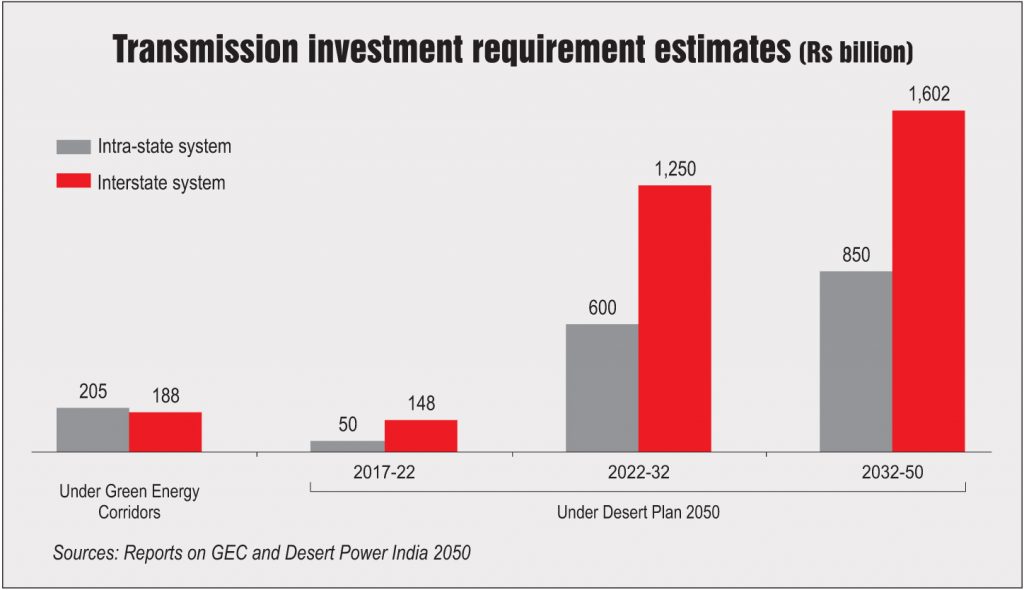 India’s central transmission utility, Power Grid Corporation of India Limited (Powergrid), developed the Green Energy Corridors (GEC) scheme to facilitate the transfer of power from the renewable energy-rich states of Andhra Pradesh, Gujarat, Karnataka, Maharashtra, Rajasthan and Tamil Nadu, as well as to ensure efficient grid integration in light of the intermittent nature of renewable energy. Under the first phase of the GEC, 17,000 ckt. km of line length and 34,600 MVA of substation capacity is planned to be added. Of this, 13,600 ckt. km and 16,650 MVA will be at the intra-state level, and 3,400 ckt. km and 18,000 MVA at the interstate level.

So far, none of the transmission lines proposed under GEC-I have come online. Due to delays in offering these projects through competitive bidding, the power ministry had awarded all the interstate transmission system (ISTS) lines proposed under GEC-I to Powergrid on an urgent basis. At present, eight transmission lines aggregating over 2,000 ckt. km in length are under execution and are expected to be operational by 2018. At the intra-state level, projects are only at the tendering phase. In addition, GEC-II is being planned by Powergrid for the grid integration of about 22,000 MW of renewable energy by 2021-22. Of this, the ISTS will evacuate around 17,600 MW, while the balance 4,500 MW will be evacuated through intra-state networks.

In another major move, Powergrid released the Desert Power India 2050 report in December 2013, highlighting the vast renewable energy (solar and wind) potential of Indian desert wasteland, and the investment required to harness it and expand the existing transmission network in tandem with the generation capacity. This is part of the Ministry of New and Renewable Energy’s (MNRE) efforts to assess the renewable energy potential of India’s desert regions in Rajasthan, Gujarat, Jammu & Kashmir and Himachal Pradesh, and prepare a phased development plan for infrastructure expansion, including a transmission network, by 2050. The MNRE is also formulating a scheme to provide financial assistance to state governments for setting up the required transmission infrastructure.

Powergrid’s study on the GEC estimates that an investment of Rs 425.57 billion is needed for the grid integration of renewable projects. The majority of the investment requirement, about Rs 204.66 billion, is towards intra-state system strengthening in Tamil Nadu, Andhra Pradesh, Gujarat, Rajasthan and Himachal Pradesh. Another Rs 188.48 billion is towards ISTS. The other investment areas identified by the report include the provision of dynamic reactive compensation (Rs 5.68 billion), real-time dynamic state measurement scheme (Rs 4.51 billion), energy storage (Rs 20 billion) and the establishment of renewable energy management centres (Rs 2.24 billion). 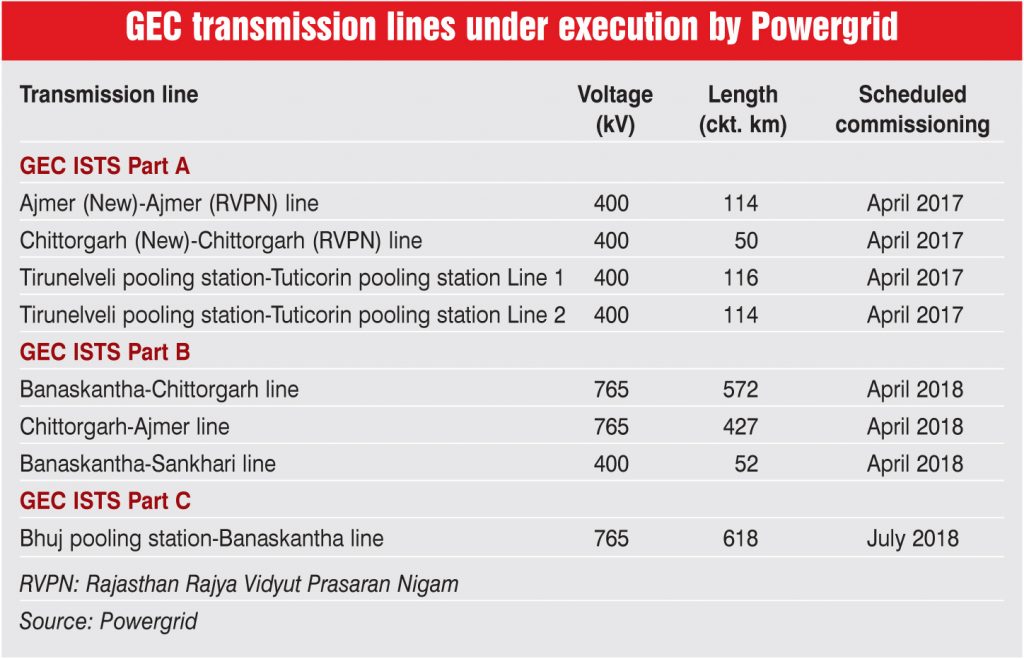 An additional investment requirement of Rs 4,500 billion has been identified by Powergrid for expanding the transmission network under the Desert Power Plan. Of this, about Rs 2,550 billion will be for developing ultra high voltage AC and DC transmission corridors for evacuating power from the four desert regions, about Rs 1,500 billion for strengthening the intra-state power network and another Rs 450 billion for developing three high-voltage direct current multi-terminals of ±800 kV, 6,000 MW to connect the north-eastern region with the northern region.

To fund the investments, the central and state governments are seeking funds from multilateral agencies. Germany’s KfW has announced Euro 1 billion as financial assistance for interstate transmission projects under GEC-I. Other global funding agencies providing financial assistance for intra-state renewable energy transmission projects are the Asian Development Bank, the Japan International Cooperation Agency and the World Bank. Funding is also being sourced from the National Clean Energy Fund, financed through the clean energy cess imposed on coal.

Multiple challenges in grid development and management need to be overcome to ensure the smooth integration of added capacity. Poor state utility finances are hindering network investments at the intra-state level. Advance planning for transmission is necessary due to the mismatch between the commissioning schedules of wind power projects and associated transmission systems. There is a need to adopt a pocket-wise last mile connectivity development approach. The availability of sub-transmission and distribution networks for power evacuation is another major area of concern.

In addition to the challenge of grid development, grid operators face multiple issues while accommodating a huge quantum of intermittent renewable energy. Wind plants are generally not capable of supplying ancillary services and reactive support to the system in a despatchable and controllable manner. Some wind turbines consume reactive power from systems, which can have an adverse impact during disturbances or high loadings. Harmonic voltage distortion at the connection point of wind farms and solar parks is likely to increase due to the deployment of electronic equipment for renewable energy integration.

The government is trying to address the challenges of grid frequency management by formulating regulations for the scheduling and forecasting of renewable energy as well as for introducing an ancillary services market. The transmission network is also being equipped with advanced information and operational technologies to absorb and manage variations in power flow.

Overall, the development of transmission systems associated with renewable energy is expected to result in the introduction of new technologies and market instruments. Adequate policy and regulatory attention, combined with the requisite investments in this segment, will play an essential role in ensuring that these do not become roadblocks in the expansion of renewable energy.