With the growing environmental awareness, countries across the world have been aggressively promoting a low-carbon energy policy. Recently, India, the world’s third largest carbon emitter, committed to reducing its carbon emissions relative to the GDP by 33-35 per cent by 2030 as compared to the 2005 levels. The government now faces the tall task of meeting this commitment in the face of the growing electricity demand. Unlike Western countries, India cannot afford the luxury of abandoning coal-based generation due to the local demand-supply restrictions.

As per Central Electricity Authority estimates, the demand for electricity will increase at a high compound annual growth rate of 7.2 per cent during 2016-22, given the projected economic and demographic growth. While the government is targeting unprecedented renewable capacity addition over the coming years, coal will continue to remain at the core of the power supply strategy given its abundant availability and high affordability. Significant investments are currently under way, with about 103 GW of coal capacity projected to come online in the next five years (between 2016-17 and 2020-21).

Given coal’s dominance in the power generation segment, technology solutions to mitigate its adverse environmental impacts hold a key position in India’s sustainable energy security strategy. Although cost continues to remain a key concern, the adoption of such technologies is increasing progressively, driven primarily by government mandates and regulations.

The application of environmental solutions gains further importance in the case of India as the domestic coal supplied to the power generation segment is of low quality. The calorific value of Indian coal is low with energy content ranging from 2,500 kilocalories to 5,000 kilocalories per kilogram. This implies that larger volumes of coal must be burned to achieve the same level of generation, thus releasing more pollutants. Further, the ash content of Indian coal is high (about 35-40 per cent higher  than Australian coal). The high ash content and moderate moisture lowers its heating value and reduces the efficiency of TPPs. Therefore, the wide-scale adoption of environmental solutions becomes imperative for India.

Increasing the efficiency of the combustion process in plant boilers is the most efficient and cost-effective method of preventive climate protection. It is estimated that a 1 percentage point increase in efficiency can result in a 2-3 per cent reduction in CO2 emissions.

In the case of existing plants, aggregate efficiency improvements of 7-20 per cent can be achieved through refurbishments and retrofits. These include measures like optimisation of air pre-heaters, combustion systems, condensers, feedwater heaters and soot blowers; replacement of ash removal systems; expansion of the air heater surface of boilers; upgrade of cooling system performance; improvement of flue gas moisture recovery, flue gas heat recovery and process controls; and reduction in boiler slag formation, furnace fouling and steam leaks. The feasibility and impact of specific improvements vary based on site-specific circumstances.

In addition, significant improvements in thermal efficiency can be achieved by making other design modifications. These include adding a second reheat stage on the steam turbine, and reducing the condenser pressure, excess air ratio and stack gas exit temperature. The implementation of advanced control concepts in TPPs can help optimise combustion.

Further, the adverse environmental impact of TPPs can be reduced by treating TPP emissions in an appropriate manner. Air quality control systems can substantially reduce the amount of SO2, NOx and SPM released by TPPs. Flue gas desulphurisation (FGD) systems utilise proven technologies like electrostatic precipitators or bag filters for removing fine particulates and SO2. Besides, NOx emissions can be controlled through combustion modifications such as the use of low-NOx burners and through selective catalytic reduction systems.

Moreover, wastewater generated by TPPs is also required to be treated before being discharged into the environment. Since the wastewater contains oil, it is sent to high performance oil separators such as the parallel plate interceptor and corrugated plate interceptor. Subsequently, the water is passed through a number of filters comprising sand, oil adsorbent and active carbon to separate trace amounts of oil, suspended solids and other pollutants. Wastewater from water purifiers and FGD facilities is temporarily held in storage tanks where it is treated in neutralising, coagulating and sedimentation systems to reduce the acid and alkali content, as well as remove suspended solids and soluble iron.

The fly ash generated by TPPs is disposed of in dry or wet state, and it satisfies the criteria for landfill disposal. Fly ash is being used in large quantities to construct pavements, roads, flyovers and embankments; and in the manufacture of bricks, polymer products and fertilisers. Coal beneficiation is also necessary before it is used for combustion in order to remove impurities and reduce its ash content. 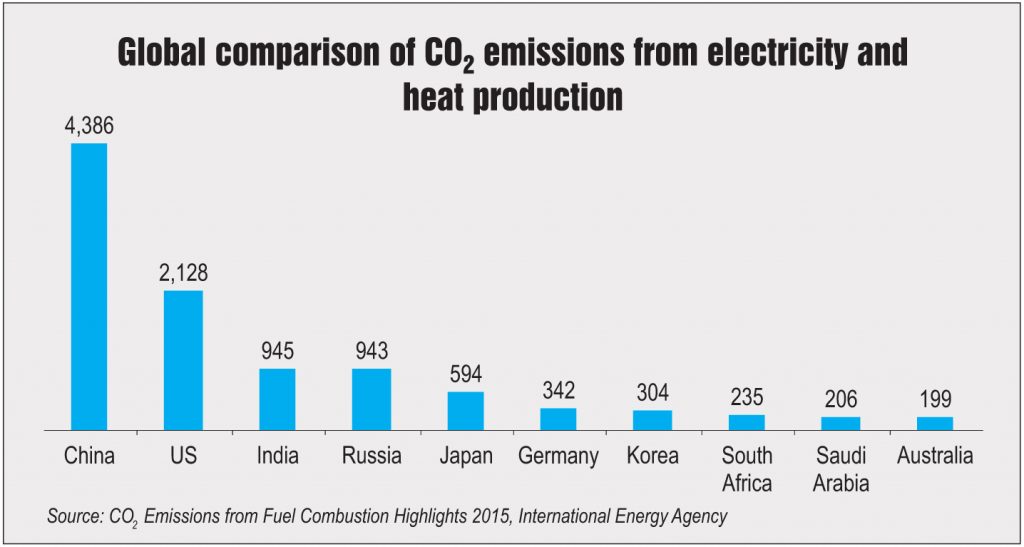 Given coal’s position in India’s energy strategy, the government has been actively promoting the use of clean coal technologies to mitigate its environmental impact. All new coal-based TPPs that will come up during the Thirteenth Plan period (2017-22), including ultra mega power projects, are being planned on supercritical and ultra-supercritical technologies.

As for existing power plants, the government is encouraging the switch to supercritical technology by providing automatic coal linkage transfers to utilities replacing ageing subcritical units with supercritical ones. If the capacity of the new proposed supercritical plant is higher than the old one, additional coal linkage would be granted on a priority basis. This will, however, be subject to the availability of coal on a best effort basis up to an additional capacity of 50 per cent of the old plant. In addition, the government is actively undertaking renovation, modernisation and life extension of old generating units, and replacing old and inefficient units in a phased manner.

Further, the government has approved an advanced ultra-supercritical technology research and development project. It entails a cost of Rs 15 billion and involves companies like Bharat Heavy Electricals Limited, NTPC Limited and the Indira Gandhi Centre for Atomic Research. The project aims to achieve higher efficiency, and reduce CO2 emissions and coal consumption for coal-based TPPs. In addition, advanced technologies are being deployed by generators to ensure compliance with the recently released stricter environmental pollution norms. In December 2015, the Ministry of Environment, Forest and Climate Change notified the revised emission standards for coal-based power plants, which aimed at reducing SPM emissions to 0.98 kg per MWh, SO2 to 7.3 kg per MWh and NOx to 4.8 kg per MWh.

Given the tussle between environmental consciousness and the need to increase generation, the demand for environmental solutions to reduce emissions has picked up. The deployment of cost-effective emission reduction technologies will not only curb the adverse impact of coal-based generation on the environment, but also enable efficient electricity generation. Although the focus at present is on the installation of the best available commercial technology, going forward, the government must also support projects that aim at developing more efficient, near-zero emission technologies for coal-based generation. Meanwhile, the government should continue playing a crucial role in terms of establishing an appropriate and stable policy framework for making investments in such technologies, taking into account the higher capital costs.