Reducing the cost of power has been a key priority for the present government. On many occasions in the past, the government has reiterated its intention of providing electricity at affordable prices. It wishes to do this by improving the efficiency of supply and passing on these benefits to the consumers. As another step in this direction, the government recently announced guidelines for short-term power purchase. Power Line takes a look at these guidelines and the likely impact they will have on the sector…

The bilateral trading segment registered a negative growth of 1.57 per cent in its volumes traded in 2014-15 when compared to 2013-14, decreasing from 35.11 BUs to 34.56 BUs, although over the years, the volume traded through bilateral trading has shown healthy growth. The volume of electricity traded increased at a compound annual growth rate (CAGR) of 7.88 per cent between 2008-09 and 2014-15.

The volume of electricity transacted directly between distribution companies (discoms) increased at a CAGR of 11.04 per cent between 2010-11 and 2014-15, reaching 15.58 BUs in 2014-15. Its share in the total short-term market increased from 13 per cent to 16 per cent in the past five years. This trend could be due to the increasing interactions among discoms through various workshops and forums. With the knowledge of available sources of short-term power, the discoms then directly negotiate prices and trade short-term power among themselves instead of involving a trader to finalise the terms of the contracts. As per Sabyasachi Majumdar, senior vice-president, ICRA Limited, “Discoms prefer the bilateral PPA route since it gives certainty of power in terms of both price and quantum (more in terms of price). Most discoms prefer bilateral short-term PPAs, which are signed through mutual negotiation.”

The new guidelines are expected to meet the following objectives:

The guidelines do not apply to power procured through the power exchanges or through the banking mechanism. They permit procurement by more than one procurer through a combined bidding process. In such a scenario, the procurers will have the option of conducting the bid process through an authorised representative.

Bids can be invited on a round-the-clock (RTC) basis or for different time slots as per the requirement of the procurer. Utilities may also give flexibility to the bidders to bid for a part of the tendered quantity. 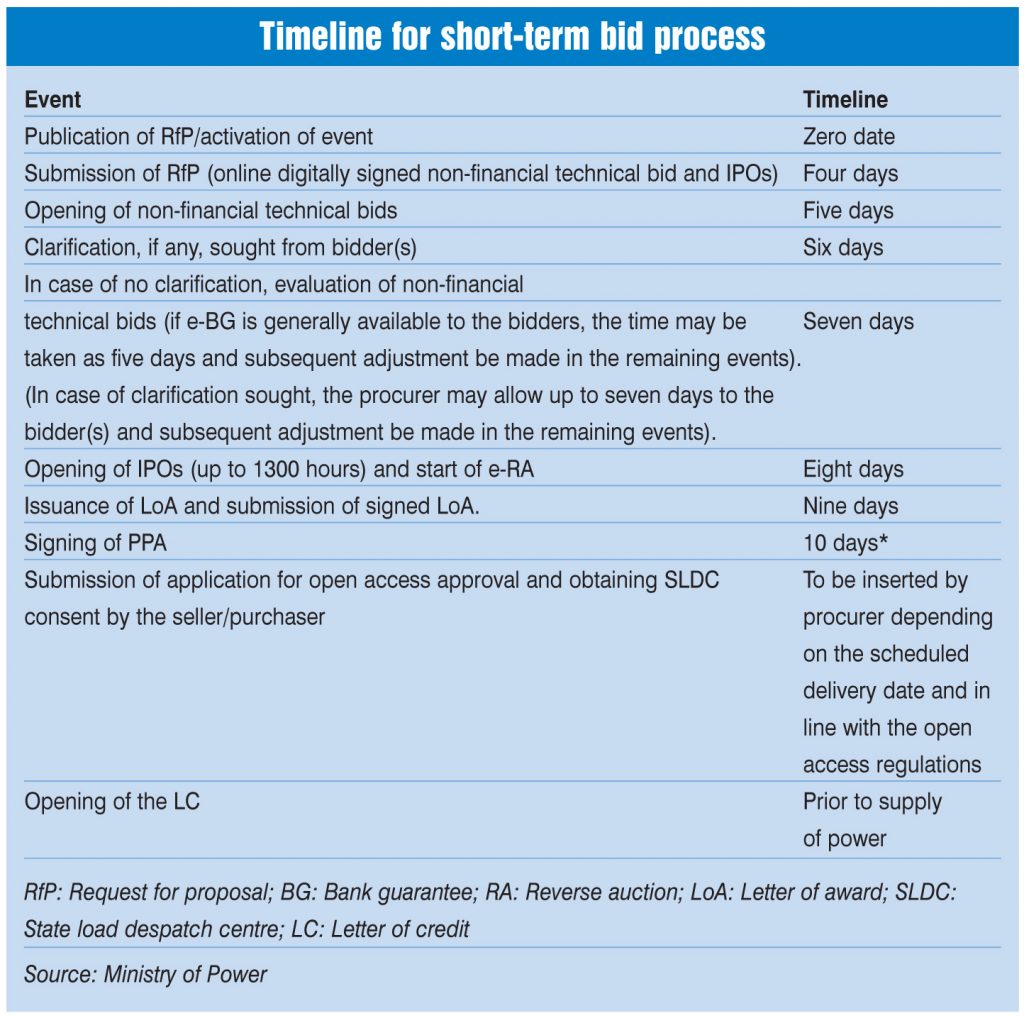 The tariff to be quoted is a single tariff at the delivery point, including the capacity charge, energy charge, trading margin, point of connection charge applicable, and all taxes, duties, cess, etc. The delivery point for interstate transmission of power will be taken as the state/regional periphery of the procurer, while for intra-state transmission, it will be the interconnection point of the seller with the state or central transmission utility. No escalation of the tariff is allowed during the contractual period. In the case of power being supplied through an alternative source, any additional charges and losses due to the cancellation of the existing corridor and the booking of a new corridor will have to be borne by the seller.

The government recently also launched the Discovery of Efficient Electricity Price (DEEP) e-bidding and e-reverse auction portal for the procurement of short-term power by discoms. The portal can be accessed through the MSTC website. The government expects the portal to curb prices by introducing competition. It will also lead to transparency in power procurement by weeding out illegal transactions. The scope of this portal is expected to be expanded soon to cover medium-term and long-term procurement of power. The central government expects all states to put their power purchase data on the portal within one month.

The online e-bidding will comprise two parts – e-tender and e-reverse auction. All bidders will be required to submit separate non-financial technical bids and financial bids, that is, initial price offer (IPO) through the portal. Bidders can indicate their minimum threshold, which would be considered for allocation of power.

The bidders will be ranked as per their price bids and the highest bidder will be eliminated if the total quantity on offer is not less than or equal to twice the requisitioned quantity. The reverse auction, which will start within 120 minutes of opening the IPOs, will give the bidders the option of reducing their quoted tariff by one paise or its multiples and of increasing their quoted quantum by 1 MW or its multiples. The lowest tariff will be visible to all the bidders during the course of the reverse auction. After the e-reverse auction, the bidders will be ranked in the ascending order of tariffs quoted by them. The utility will procure power from the bidders in the order of their ranking, decided on the basis of the tariff quoted until the entire requisitioned capacity is met.

Bidders have the option to bid multiple bids from separate logins either from the same or different sources. Bidders also can quote their best prices and need not match or bid lower prices against the prevailing lowest bidder.

The new guidelines are expected to increase the activity in the short-term trading market. Over the past few years, there has been a lull in long-term power procurement and PPA signing by the discoms owing to their weak financial position. The low demand for power from discoms has led to a situation where power plants are forced to run at low plant load factors (PLFs). In such a situation, if the short-term power market picks up, it will provide an avenue to plants not having PPAs, or having only part-PPAs to sell their power.

Although short-term power transactions at the power exchanges follow the market mechanism and are fairly transparent, bilateral power trading has not been as transparent and is based on mutual negotiations. This is expected to change, given the new guidelines. “The new guidelines for short-term power will make it more transparent and will increase the competition. Hence, it will be beneficial for the utilities,” says Majumdar. 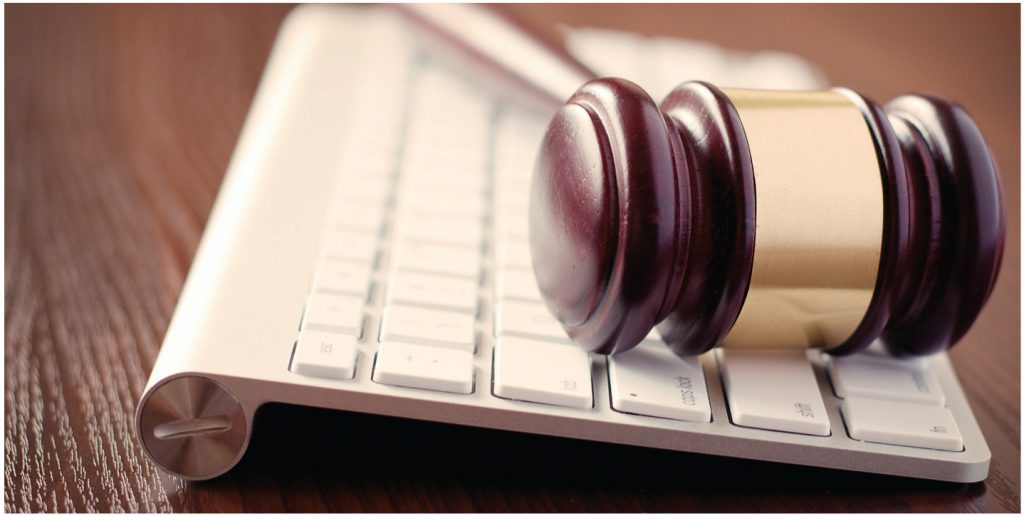 In the past couple of years, the government has had success with e-auctions, which has led to its increased adoption across sectors. The coal block allocation process through e-auctions saw very aggressive bidding, with players quoting negative bids to secure coal blocks. Similarly, the bidding route has also seen solar power tariffs coming down significantly to reach levels below Rs 4.50 per unit. This experience provides confidence that the competitive bidding route will help in lowering the cost of power. As per Majumdar, “We expect a lot of competition in e-auctions for short-term power. It could lead to bilateral trading tariffs declining by 50-60 paise per unit.”