With a share of over 60 per cent in the total installed generation capacity, coal-based power has continued to play a key role in the country’s energy mix. The relative abundance of coal vis-à-vis other fossil fuels, the lower cost of generation and shorter gestation period have driven segment growth over the years. The improvement in domestic coal production in the past two years has further encouraged independent power producers (IPPs) in the segment. Coal India Limited (CIL) recorded an incremental coal production growth of 74 million tonnes (mt) in 2014-15 and 2015-16, which is almost equivalent to the growth during the entire Eleventh Plan period (2007-12). However, challenges in terms of declining plant load factors (PLFs) and the lack of demand from discoms persist.

A look at the key trends, developments and outlook for the coal-based power segment…

The PLF of coal-based plants has declined consistently since 2011-12, from over 73 per cent to about 61 per cent in 2015-16 (as of February 2016). In the initial years, coal shortage was the primary reason for the decline in PLF. However, it is now due to the weak financial condition of the discoms and low power demand, especially by industrial consumers. Overall, the PLF of coal-based capacity has declined by over 10 percentage points across sectors. While the central sector was able to maintain a PLF of over 70 per cent in the past five years, the PLFs of the private and state sectors dipped to below 60 per cent in 2015-16.

Coal supply to power plants improved considerably in 2015-16, with CIL registering a record production of 536 mt during 2015-16, about 42 mt more than that in the previous year, indicating a year-on-year growth of over 8.5 per cent. As a result, the average inventory of coal stock at power plants reached 28 days in end-March 2016 with no plant reporting critical or supercritical status for want of coal. An increase in the availability of rakes by Indian Railways from 194 per day in 2014-15 to 212 during 2015-16 enabled a record evacuation of coal. Forest clearance entailing 4,179 hectares of land helped CIL achieve these production levels.

In a bid to incentivise efficiency in coal-based power generation, the government has approved automatic transfer of coal linkages awarded to old plants (of over 25 years) to new supercritical plants. Automatic transfer is permissible only when the new plant is set up within the state in which the old plant was located and the old plant has actually been scrapped. 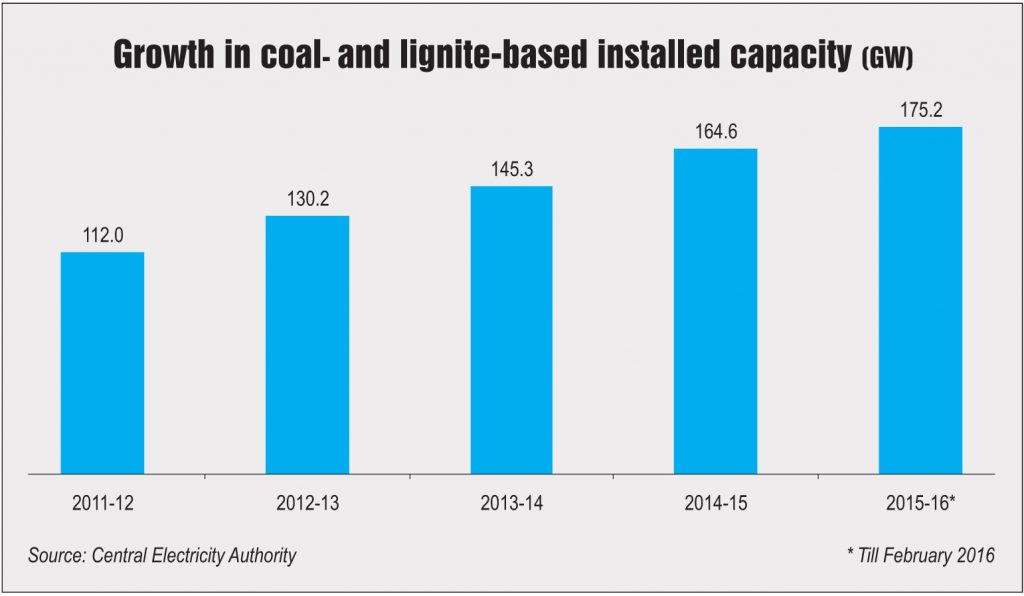 Several key developments took place with regard to ultra mega power projects (UMPPs). On the policy front, the government released draft standard bidding documents (SBDs) for domestic coal-based UMPPs in August 2015 and for imported coal-based UMPPs in January 2016, following the cancellation of the tendering process in January 2015. A key feature of the draft guidelines is the reverting to the build-own-operate model of UMPP development rather than the previous design-build-finance-operate-transfer model. The SBDs attempt to address developers’ concerns regarding variations in imported coal costs through a provision on blending.

The trend of mergers and acquisitions (M&As) continued in 2015-16 as private sector players continued to consolidate their position in the power sector. In February 2016, India Power Corporation Limited entered into an agreement with France-based ENGIE for acquiring the latter’s 89 per cent stake in Meenakshi Energy Private Limited (MEPL). MEPL operates a 300 MW coal-fired power plant and is executing another 700 MW unit in Nellore. In September 2015, JSW Energy entered into a binding MoU with Jaiprakash Power Ventures Limited for acquiring 100 per cent stake in its 500 MW Bina TPP in Madhya Pradesh. JSW Energy is at an advanced stage of discussions to acquire Jindal Steel and Power Limited’s 1,000 MW Raigarh TPP. The deal is expected to be valued at around Rs 60 billion.

In the short term, coal-based IPPs may face issues in debt funding of projects owing to the rise of stressed assets with public sector banks. Besides, the government’s increasing focus on renewables, especially solar, may prompt IPPs to keep their thermal expansion plans on the back burner. The recent amendments to the tariff policy have introduced the concept of “renewable generation obligation” under which new coal and lignite-based power plants will be required to set up or procure renewable capacity. Also, going forward, coal-based IPPs should gear up for more stringent environmental norms in light of India’s commitments to mitigate climate change. To this end, the environment ministry has notified stricter emission norms for TPPs and the recent budget announcement to increase the clean energy cess on coal from Rs 200 per mt to Rs 400 per mt is another step in this direction.

However, given the low per capita electricity consumption and large scope for rural electrification, power demand will continue to increase in the coming years. Industrial power demand is also expected to pick up as signs of revival can be seen in the economic growth rate and the index of industrial production. In addition, with the launch of the Ujwal Discom Assurance Yojana, the financial condition of discoms is likely to improve and they may come up with power procurement bids in the coming months. All these factors augur well for coal-based power. Given the abundance and cost-effectiveness of coal for power generation, it will remain the principal option for meeting base load demand in the long term.