The development of renewable energy-based power has been one of the key focus areas of the current government. Towards this end, it has taken several initiatives to incentivise states, utilities, investors, and consumers to increase the uptake of renewables in the country. These include the adoption of the National Offshore Wind Energy Policy, proposed amendments to the Electricity Act, 2003 to increase the renewable purchase obligation (RPO) target to 10.5 per cent, amendments to the National Tariff Policy, notification of a new regulatory framework by the Central Electricity Regulatory Commission (CERC) for scheduling and forecasting, amendments to the renewable energy certificate (REC) pricing regime to make it more realistic, inclusion of renewable energy  projects in the Priority Sector Lending Norms of Commercial Banks, and provision of support instruments like generation-based incentives (GBIs), accelerated depreciation (AD), and viability gap funding (VGF).

As of March 2016, the total installed grid-connected renewable energy capacity in India stood at 42.7 GW. Wind energy has the highest share in the existing renewable capacity with an installed capacity of 26.7 GW, followed by solar with 6.7 GW. Apart from solar and wind, 4.2 GW of capacity comes from small-hydro, 4.8 GW from bio-power (including biomass and gasification, as well as bagasse cogeneration), and 0.1 GW from waste to energy. By 2022, the government plans to take this to 175 GW (100 GW of solar, 60 GW of wind, 10 GW of biomass, and 5 GW of small-hydro).

Wind power continues to be the dominant source of energy in the sector, accounting for more than 60 per cent of the total installed capacity. In terms of annual growth, the segment added 3,300 MW of capacity in 2015-16, surpassing its target of 2,400 MW. This shows a further improvement over the performance in 2014-15 when the segment added 2,312 MW against the target of 2,000 MW.

The wind power segment was earlier dominated by states like Tamil Nadu, Rajasthan, Gujarat, and Maharashtra, but in recent times, other states like Karnataka, Andhra Pradesh and Madhya Pradesh have come to the fore. Tamil Nadu continues to have the maximum share in the total wind installed capacity, followed by Maharashtra and Gujarat. Looking ahead in terms of the capacity targets set by the Ministry of New and Renewable Energy (MNRE) for 2022, while Tamil Nadu is expected to have the maximum capacity at about 11,900 MW, Rajasthan, Gujarat, and Andhra Pradesh are expected to have around 8,000 MW each, followed by Madhya Pradesh and Karnataka with a targeted capacity of 6,200 MW each.

The National Institute of Wind Energy (NIWE) recently launched the Wind Energy Resource Map of India at 100 metre above ground level (AGL) on the Geographic Information System online platform. It has estimated the country’s wind energy potential at 100 metre AGL to be over 302 GW. As per its estimates, Gujarat has the maximum potential of around 84 GW, followed by Karnataka at 56 GW, Maharashtra at 45 GW, Andhra Pradesh at 44 GW and Tamil Nadu at 34 GW.

The re-introduction of GBI in 2013 and of AD benefits in 2014 helped in creating a stimulus for investments in the sector. However, the AD benefits have been reduced from 80 per cent to 40 per cent as per the Union Budget 2016-17. Another key recent development in the wind power space has been the approval of the National Offshore Wind Energy Policy by the cabinet. With this, the MNRE has been authorised as the nodal ministry for using the offshore areas within the exclusive economic zone of the country, and NIWE has been authorised as the nodal agency for the development of offshore wind energy, for the allocation of offshore wind energy blocks, and for coordination with related ministries and agencies. Apart from these measures, the growing industry interest in large-scale wind-solar hybrid projects, and the notification of a new regulatory framework by the CERC for scheduling and forecasting also indicate a promising outlook for wind.

Solar power in India has witnessed impressive growth in a short span of time – from around 10 MW in 2010 to a grid-connected installed capacity of 6,762 MW as of March 2016. In addition to grid-connected capacity, there is off-grid capacity in the form of solar PV systems of around 314 MW as of March 2016. During 2015-16, the solar segment added 3,018 MW of capacity, more than twice the target of 1,400 MW. In comparison, in 2014-15, about 1,100 MW of solar capacity was added. The rapid growth in these years has come on the back of a favourable policy environment. While the launch of the flagship programme – the Jawaharlal Nehru National Solar Mission (JNNSM) – helped solar development gain ground, the growth in the sector in recent years has also been driven by initiatives taken by various states.

Apart from the overall policy initiatives for the renewable energy sector, as mentioned above, the government has taken several measures specifically in support of the solar sector over the past year. They include the announcement of the solar park policy, the extension of the grid-connected rooftop and small solar power plants programme till 2019-20, and plans of announcing a solar zone policy and a solar rooftop policy. The announcement of net metering policies or guidelines by several states, and the reinstating of the rooftop subsidy are the other major developments in the solar industry. Other initiatives by the central government include the implementation of pilot-cum-demonstration projects being undertaken for the development of grid-connected solar PV plants on canal banks and canal tops with a capacity of around 100 MW, and the development of solar cities.

Meanwhile, the sharp decline in solar costs, from Rs 20 per unit a few years ago to around Rs 4.50 per unit realised in recent bids, has made the business proposition for investments in solar highly attractive. Further, as per a KPMG report, “The Rising Sun 2015”, solar power prices could be up to 10 per cent lower than coal power prices by 2020. 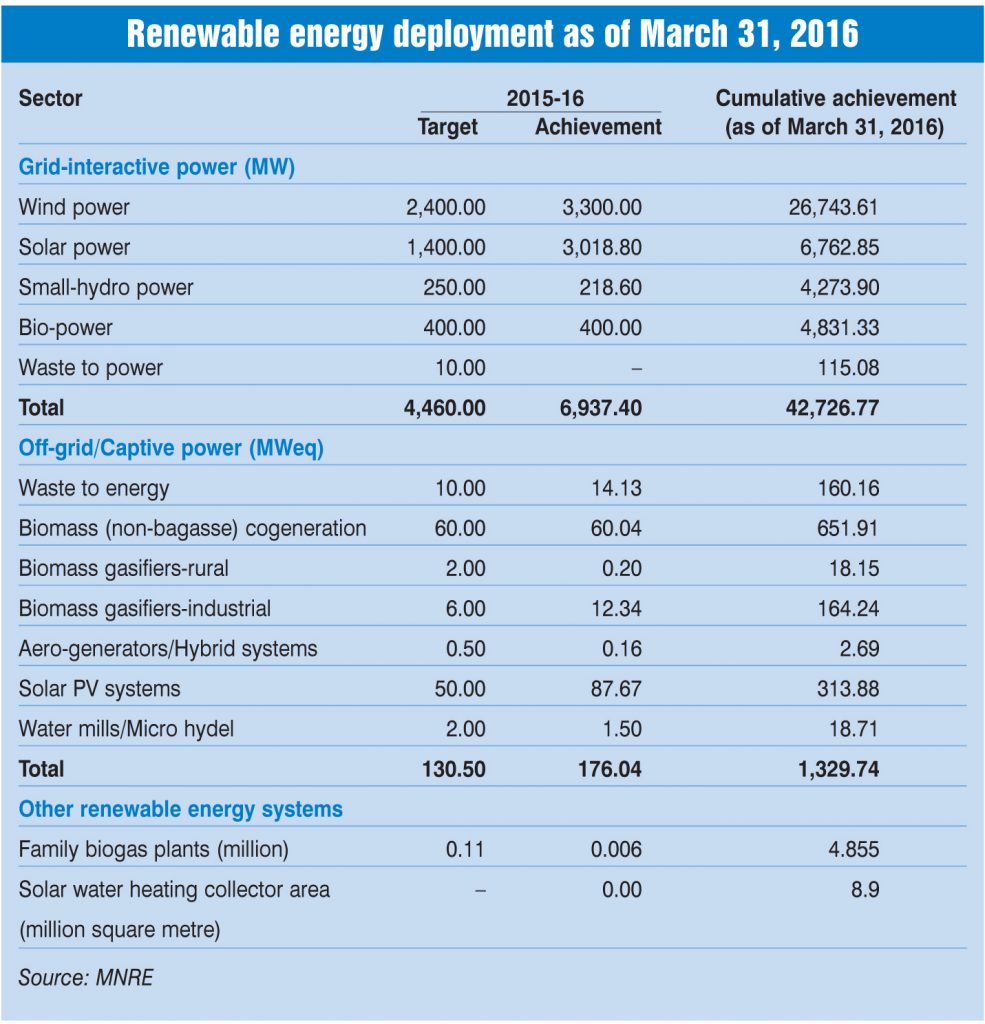 Performance in the bio-power and small-hydro power (SHP) segments has not been encouraging of late. In the SHP space, there has been a decline in capacity addition in the past couple of years. During 2015-16, only 218 MW of capacity has been added against a target of 250 MW. While the target was just about met last year, by installing 251.61 MW of capacity against the target of 250 MW, the sector consecutively missed the targets in the previous two years. A major reason for the segment’s modest performance is that while the costs of SHP projects have gone up, the tariffs determined are not attractive enough to support investments. To provide an impetus to this segment, the MNRE, in February 2015, drafted the National Mission on Small Hydro. However, there has been limited progress on this front.

In the bio-energy segment, biomass-based projects continue to suffer on account of fuel-related challenges. While 400 MW of grid-connected biomass-based (biomass and gasification and bagasse cogeneration) capacity was added in 2015-16 in line with the targets, the capacity addition has been continuously declining over the years. Meanwhile, the non-bagasse cogeneration segment saw a capacity addition of 60 MWeq as targeted.

The government’s increasing focus on the renewable energy sector, with ambitious targets and significant initiatives such as Make in India, has been successful in attracting large-scale interest and commitment from the industry. In the past 13 months, over Rs 712 billion has been sanctioned by various banks and non-banking financial companies (NBFCs) for the renewable energy sector, mainly for wind and solar projects. Of this, Rs 295 billion has already been disbursed (as on March 21, 2016). With these developments, meeting the government’s 175 GW renewable energy target seems more reasonable now than when it was announced a year ago. However, more initiatives are required for biomass and small-hydro. Simultaneously, it is imperative to look beyond the creation of a regulatory and policy framework to resolve issues related to evacuation infrastructure, power off-take, resource intermittency, land availability, etc. for achieving the country’s long-term renewable energy  goals.