Gujarat State Electricity Corporation Limited (GSECL) was incorporated in August 1993 as a wholly owned subsidiary of the erstwhile Gujarat Electricity Board (GEB). The company commenced its commercial operations in 1998 with its business limited to only a few cities until March 2005. However, after the unbundling of GEB in 2005, GSECL became a 100 per cent owned subsidiary of Gujarat Urja Vikas Nigam Limited with the responsibility of electricity generation in the state.

During 2015-16, the company commissioned two units of 250 MW of capacity each under the Sikka thermal power station (STPS). Further, new projects aggregating 7,210 MW are at various stages of planning and development. Amongst these, the company initiated work on the 800 MW supercritical coal-based thermal power plant (TPP) in October 2015, at Wanakbori in Kheda district. The company has also initiated the development of the recently awarded Gare Palma coal mine by the Ministry of Coal in Chhattisgarh.

GSECL owns a total installed capacity of 6,392 MW, the majority of which comes from seven TPPs aggretating 5,825 MW (including coal, lignite and gas-based power stations) and three hydropower plants aggregating 545 MW. Apart from these, the company has implemented renewable based power generation – 10 MW of wind and 12 MW of solar power projects. The company operates India’s first canal-top solar photovoltaic (PV) project (1 MW), for which it has received accolades. In addition, the company commissioned a 10 MW solar PV power project at the Charanka solar park in January 2015.

During 2015-16, the Dhuvaran and Utran gas-based power plants cumulatively generated only 1,415 MUs and operated at PLFs of 7.9 per cent and 27.9 per cent respectively. In 2014-15, both these plants were stranded due to the non-availability of gas. While the different units of the Dhuvaran power plant operated at PLFs of 3 per cent to 13 per cent, Utran operated at less than 4 per cent PLF. As per GSECL, the PLF has declined owing to backing down and partial operations, which is beyond the company’s control.

Considering the country’s existing gas scenario, the Ministry of Power (MoP) announced a reverse e-bidding scheme in March 2015 for power system development fund support. This move aimed at enhancing capacity utilisation of gas-based power plants for the 2015-16 and 2016-17 period. GSECL successfully participated in the first two phases of the bid for the Dhuvaran and Utran (374 MW) power plants in 2015. 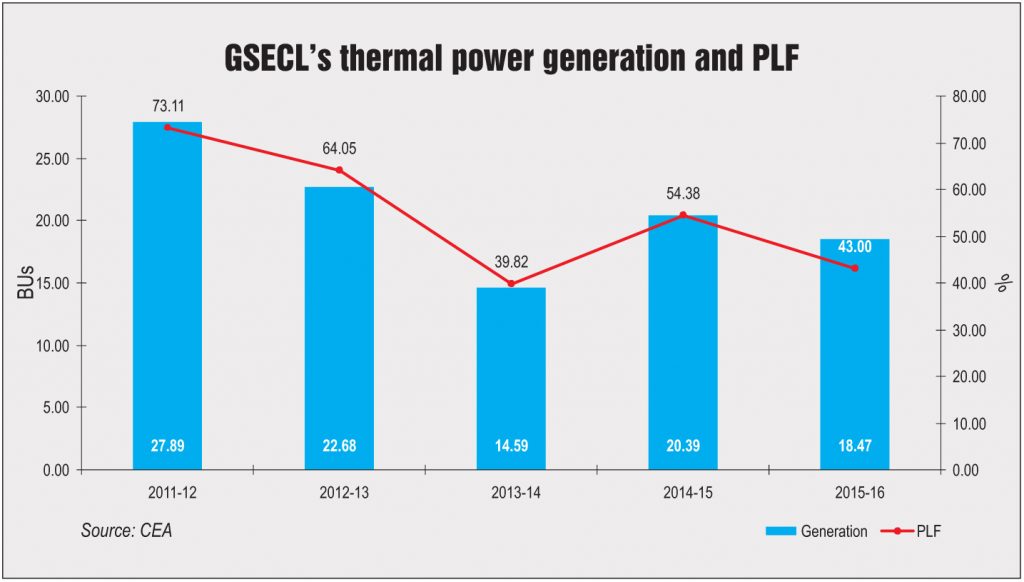 At present, GSECL has a 800 MW supercritical coal-based unit, which is under construction at the Wanakbori power station. It is a first-of-its-kind project for the company. BHEL is implementing the project under an EPC contract, which was awarded in December 2014 and entailed a cost of Rs 44,650 million. The project is expected to be completed by 2017.

GSECL has also initiated a 10 MW solar PV plant under the Jawaharlal Nehru National Solar Mission Phase II through viability gap funding and one 85 cubic metre per day capacity biogas project at Wanakbori. In addition, the company has issued a tender for design, engineering, procurement and supply, construction, commissioning, as well as comprehensive operations and maintenance of two grid-connected solar PV power plants (1 MW each) at Kutch and Sikka TPPs for 10 years. 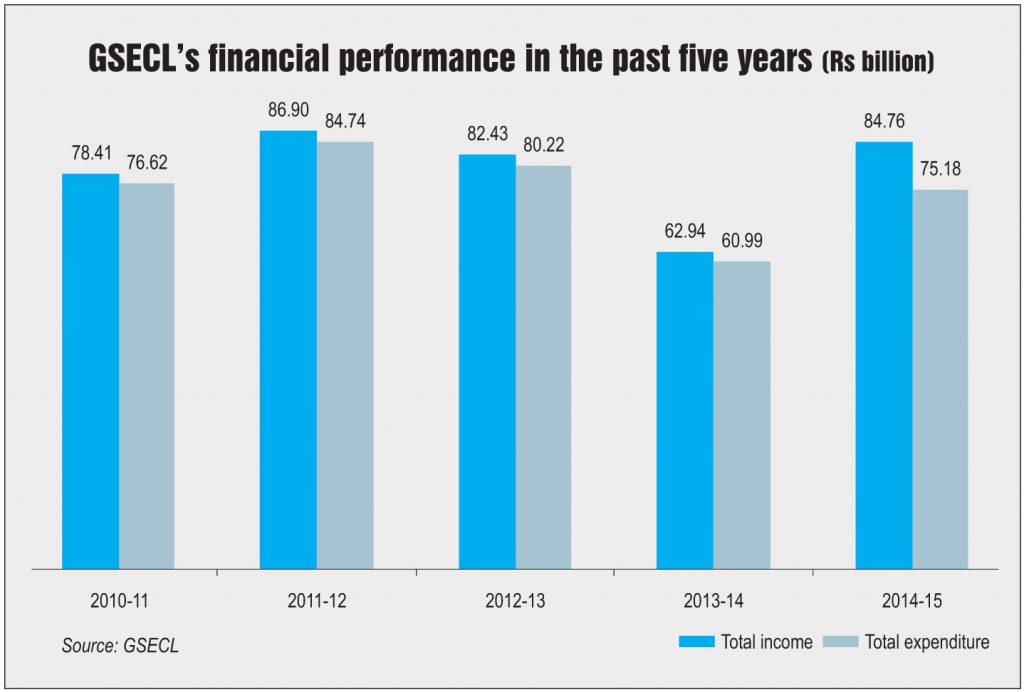 GSECL has been undertaking retrofitting works of electrostatic precipitators and turbines (200/210 MW) at the Wanakbori and Ukai power plants, upgradation of the control system at the Ukai power plant, and modification in the boiler back pass of the Ukai power plant. The company has taken necessary action to reduce the coal transportation cost. This includes the signing of an agreement with NTPC under which GSECL will swap the coal quantity allocated from Korea-Rewa coalfields with the imported coal received by NTPC Sipat.

The performance of the company has declined since 2011-12, when Gujarat became a power surplus state. This was due to backing down and partial operations of the power plants because of lower demand from the state. Therefore, even though plant availability increased (the power stations achieved the highest ever plant availability factor of 84.76 per cent during 2014-15), the power generation and PLFs were low.

While there is sufficient power, the state is still looking at increasing its power production to attract more industries. Given its vast experience, GSECL is expected to play an integral role in the state’s power production expansion plans.