Access to affordable, safe, clean and reliable energy services is a fundamental need to improve livelihood, reduce poverty and increase productivity, which will ultimately contribute to the nation’s economic growth. While India has made considerable progress on the village electrification front, with almost 98.1 per cent villages already electrified as on May 6, 2015, providing energy access to all households requires more attention. According to the World Energy Outlook 2015, there are 237 million people who still do not have access to electricity. As per the Uttar Pradesh government, 100 per cent of the villages are electrified, as on March 15, 2016. However, in reality, close to 17 million households in the state still lack access to electricity.

The Government of India has taken an initiative to provide round-the-clock electricity to each household through the Power for All initiative to electrify unelectrified households. This initiative aims to enhance the satisfaction levels of consumers and improve the quality of life of people by providing 24×7 power. However, there are hamlets/ households that could not be covered under the grid-based schemes/programmes. Further, if the village/hamlet has access to grid supply, the quality of grid supply may be deficient.

Mini-grid projects will be useful in areas where extending the grid is technically or economically not feasible or in areas with poor quality supply. These projects provide the advantage of localised consumption of electricity with minimum system losses and add substantial value through better and reliable supply of electricity. 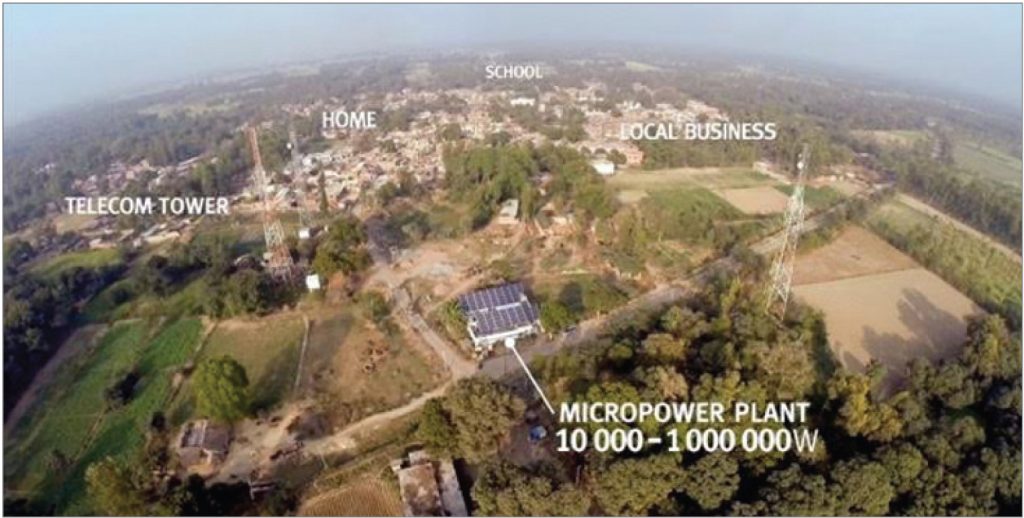 The revised National Tariff Policy mandates the appropriate commission to notify the necessary regulations in regard to mini-grid projects within six months. In this context, the Uttar Pradesh Electricity Regulatory Commission (UPERC) has issued the Mini-Grid Renewable Energy and Supply Regulations, 2016 to promote and develop mini-grid projects. This is probably the first-of-its-kind initiative in the country wherein the commission has played a key role as a facilitator rather than a regulator. The regulations have been issued by the commission after inviting public comments and holding a series of public meetings with the stakeholders. The regulations have come into effect from April 10, 2016 and will apply to all new and existing mini-grid projects for generation of power through renewable energy sources and supply of electricity to consumers in Uttar Pradesh.

The regulations attempt to strike a balance between the interests of all stakeholders – mini-grid operators (MGOs), distribution licensees and consumers. While the tariffs to be charged by the MGOs have been kept unregulated, consumers have been ensured access to electricity and quality supply. The regulations allow distribution licensees to meet their renewable purchase obligation (RPO) target from the power generated by mini-grid projects. Thus, these regulations effectuate solutions to the challenges faced by MGOs and address the concerns of all stakeholders.

The regulations are applicable to mini-grid projects with an installed capacity of up to 500 kWp. They capture different models of operation for eligible mini-grid projects, based on grid availability in the area or the possibility of grid arrival in the near future. The dynamic nature of the regulations allows MGOs to migrate from one option to another within a model depending on the developments on the ground in terms of status of electrification, the power supply situation, variation in demand, etc. 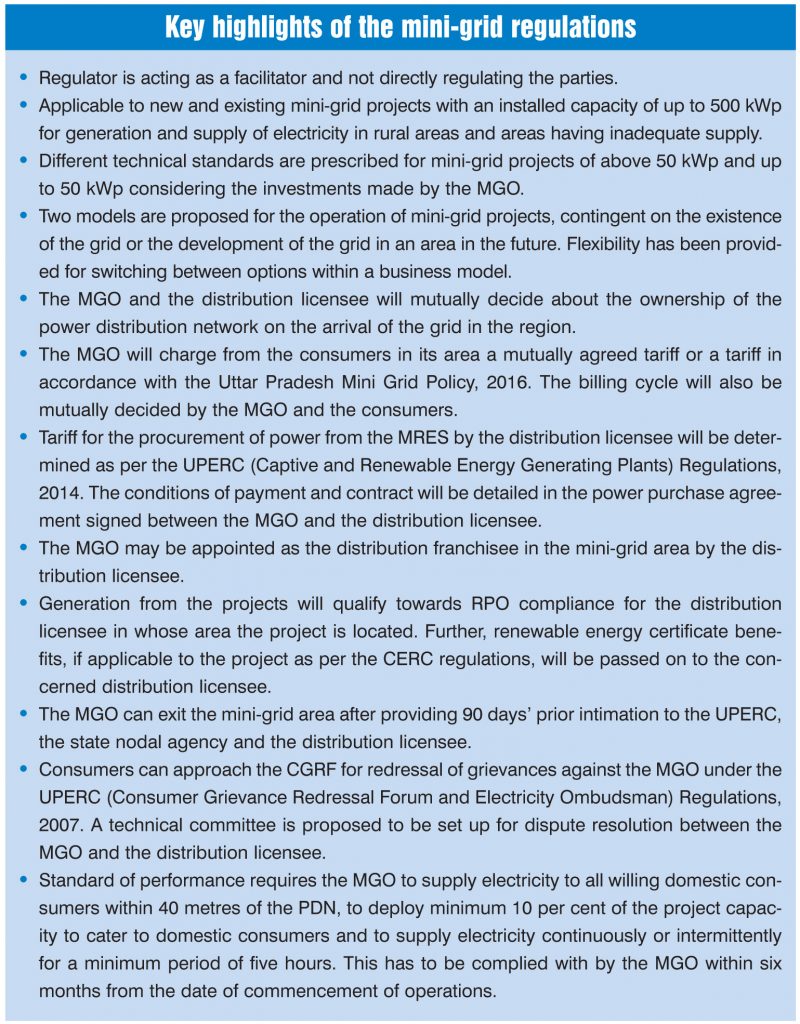 These regulations provide flexibility to both the MGO and the consumer to mutually decide on the tariff. To protect the interests of consumers, it is proposed that the MGO should supply electricity to all willing consumers within a 40 metre range of mini-grid projects during peak hours and/or compulsory supply hours (defined as continuously or intermittent supply for a minimum period of five hours, between 1700 hours and 2300 hours every day). For the electricity supplied to the grid from mini-grid projects, the MGO is proposed to be compensated at the applicable feed-in tariff for the specific technology.

The regulations also provide guidelines on technical aspects, stressing on the need for safety and quality for interconnectivity of the mini-grid projects with the grid and the creation of a distribution network for the supply of power to consumers. Taking into consideration the investments made by the MGO, different technical standards have been defined for mini-grid projects of above 50 kWp and up to 50 kWp. The quantum of electricity generated from mini-grid projects will qualify towards compliance with the RPO for the distribution licensee.

In order to resolve disputes between the consumer and the MGO, the consumer may approach the Consumer Grievance Redressal Forum (CGRF) as provided in the UPERC (CGRF and Electricity Ombudsman) Regulations, 2007. A technical committee has been proposed for the resolution of disputes between the MGO and the distribution licensee. This unique grievance redressal mechanism for the consumer and the MGO has also been specified in the regulations.

It is important to ensure successful performance of mini-grid projects. In order to do so, the MGO is mandated to submit project-specific details on a quarterly basis. The MGO is allowed to exit from the mini-grid area with 90 days’ prior intimation to the commission.

It is hoped that the mini-grid regulations will facilitate the coexistence of mini-grid projects with the grid, ensuring competition and thereby allowing access to quality and reliable electricity supply to consumers. These regulations will be helpful not only in safeguarding the interests of the involved stakeholders and attracting investments to the mini-grid sector, but also in achieving overall electrification and improvement in power supply.