In the past one year, renewable energy development has gained significant momentum in the country. With the government’s efforts to bring about a paradigm shift in the fuel mix, which is at present highly skewed towards coal, there is a strong focus on the renewable energy sector. A series of measures, both on the policy and the regulatory front, have been initiated over the past year in order to achieve the government’s ambitious target of increasing the renewable energy capacity to 175 GW by 2022, which includes 100 GW of solar and 60 GW of wind. A recent step in this direction has been the release of the Report of the Technical Committee on Large Scale Integration of Renewable Energy, Need for Balancing, Deviation Settlement Mechanism (DSM) and Associated Issues by the Ministry of Power (MoP) on April 18, 2016.

The technical committee was constituted by the MoP on April 20, 2015. It included members from the MoP, the Ministry of New and Renewable Energy, the Central Electricity Regulatory Commission, the Central Electricity Authority (CEA), Power Grid Corporation of India Limited, Power System Operation Corporation Limited (POSOCO), the National Institute of Wind Energy, the National Institute of Solar Energy, Deutsche Gesellschaft für Internationale Zusammenarbeit (GIZ), and EY. There was also representation from NTPC Limited, various state and private generating companies, as well as the renewable energy-rich states of Tamil Nadu, West Bengal, Gujarat and Rajasthan.

The committee was formed following deliberations at the Power Minister’s Conference in Guwahati in April 2015, on various issues pertaining to the large-scale integration of renewable energy. These included spinning reserves, flexible generation, need for pumped storage and peaking hydro stations, balancing requirements, ancillary services transmission system and frequency control. The committee has formulated a 15-point action plan defining the implementing agencies and the time frame for completing these actions.

The recommendations of the technical committee aim to address the various concerns highlighted by the stakeholders, which included the state utilities, renewable energy generators and  system operators.

The primary concerns highlighted by the state utilities and renewable energy generators during the deliberations of the technical committee pertained to volume limits on interstate deviations (especially for large and high renewable energy-penetration states), a deviation settlement mechanism at the intra-state level, handling variability in renewable generation, and interstate and intra-state transmission system augmentation and strengthening. In this regard, the technical committee has recognised the need for a mechanism to handle deviations as essential. It has recommended the formulation of a regulatory framework for handling interstate deviations, with special reference to large and high renewable energy-penetration states. The report has also suggested a regulatory framework for forecasting, scheduling and imbalance handling. The model regulations in this regard were notified in November 2015 and draft regulations have already been floated by six states. The report has also re-emphasised the need for maintaining reserves (primary, secondary and tertiary) at all times for system operators to maintain grid reliability and security. Moreover, the committee has noted the importance of robust transmission services to ensure that backing down of renewable generation is minimal. It has been pointed out that considering the short gestation period of renewable energy generation projects, transmission infrastructure development has to lead generation. Hence, there is a need to develop transmission corridors from states with high penetration of renewables, besides undertaking coordinated transmission planning.

With regard to system operators, the main concerns that the committee has attempted to address are those relating to load forecasting, demonstration of adequacy and balanced portfolio, implementation of frequency response and ancillary services, flexible conventional generation, technical standards and protection requirement for renewables, communication in the power sector, renewable energy management centres (REMCs) and capacity building of the various load despatch centres.

The committee has recommended that ancillary services need to be implemented within the states as well. At present, they are being implemented at the interstate level. As per the report, each state is also required to commit adequate generating resources to meet the anticipated load. It notes that the state load despatch centres (SLDCs) will be required to publish the day-ahead adequacy figures on their respective websites. Moreover, it reiterates the need for proper frequency control due to the increasing size of interconnections and interchanges between areas. As per the committee, incentivising the flexibility of conventional generation should be a focus area to meet the changing load profile and maintain the reliability of the system. It notes that for this purpose, pumped storage schemes need to be encouraged. The importance of formulating a regulatory framework for communication in the power sector, including smooth real-time data transfer between renewable energy pooling stations and the SLDC/REMC, has also been highlighted.

The report directs renewable energy generators, both wind and solar, to follow the CEA standard and protection requirements to ensure secure and reliable grid operation. It recommends the adoption of low voltage ride through (LVRT)/fault ride through (FRT) standards, active power control, etc. for solar generation. Moreover, the report recommends the establishment of REMCs and capacity building of load despatch centres, particularly in renewable energy-rich states. It notes that capacity building at the state level is important for the planning, operation, maintenance and governance of power systems that have an increasing share of renewable energy. 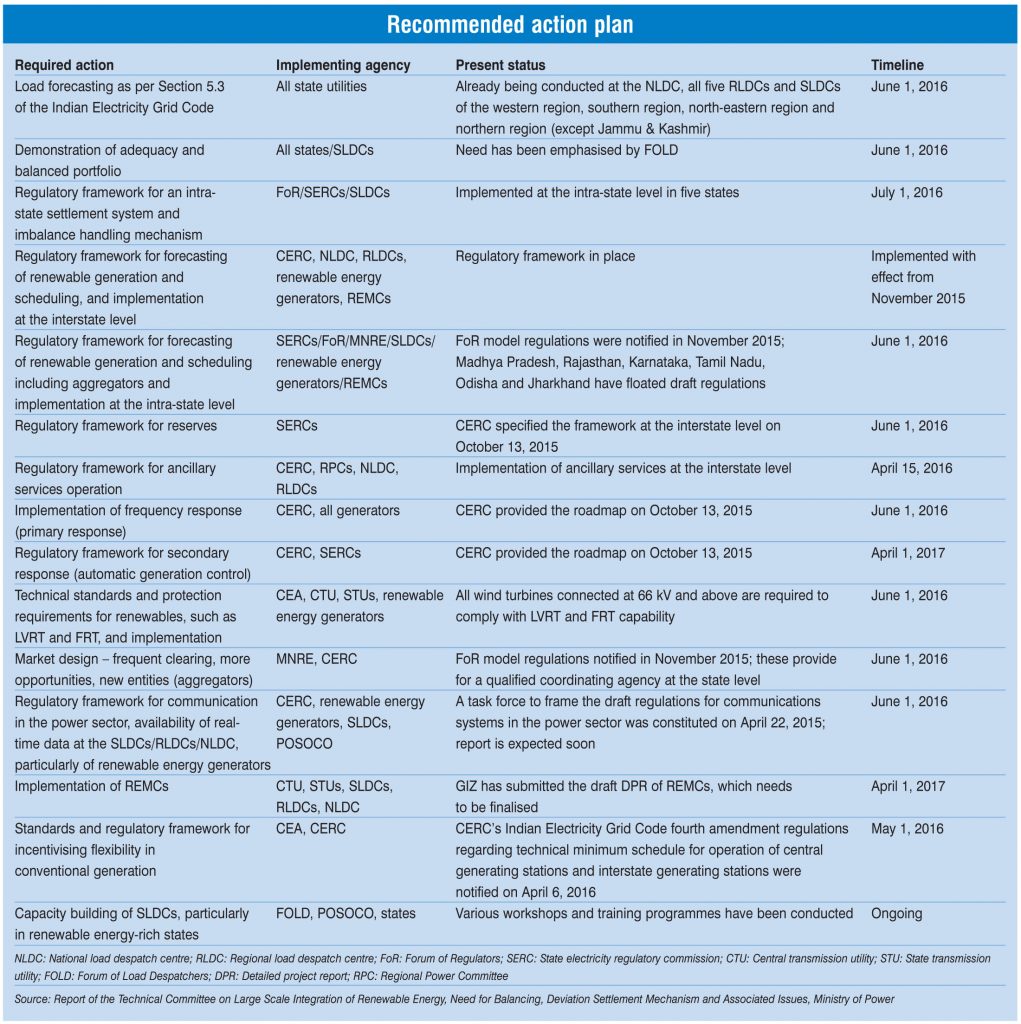 Going ahead, there is a need for all stakeholders to make concerted efforts to implement the action plan recommended by the committee in a time-bound manner. While some actions are already being taken, there are others that need to be initiated. Timely completion of the actions will also help the country meet its nationally determined contribution of reducing its GDP emission intensity by 33-35 per cent over the 2005 levels by 2030.