India’s green energy growth strategy is being driven by solar power generation, with the government setting an ambitious target of increasing solar capacity to 100 GW by 2022. The segment has witnessed exponential growth over the past few years, with the installed capacity increasing about five times from 941 MW in March 2012 to 5,248 MW in January 2016. In 2015-16, the industry added over 3 GW of solar installed capacity, which was well above the target of 1.4 GW for the year.

This growth was made possible by the support extended by the central and state governments in the form of renewable purchase obligations, renewable energy certificates, feed-in tariffs (FiTs), customs and excise duty exemptions, transmission charges waiver, etc. More recently, the price of solar has been driven down substantially due to competitive bidding of projects both by the central and state governments. Going forward, the centre’s solar park policy, net metering initiative and development of green energy corridors are expected to provide a big push to the segment.

Power Line identifies some of the key trends witnessed in recent solar capacity tenders, the key barriers to solar power growth and the future outlook for the segment…

According to Power Line Research, over 8 GW of solar capacity was allocated under various schemes in 2015-16 and another 3.6 GW is currently being tendered.  A key emerging trend in the project allocation space relates to size and concept. While project sizes have increased considerably over the years, the concept of individual utility-scale plants has evolved into a solar park development model.

During 2015-16, the Ministry of New and Renewable Energy (MNRE) approved 33 solar parks across 21 states, which will add 19.9 GW of capacity. An increasing number of tenders are being announced across state and central schemes for the development of solar parks.  Solar parks offer advantages such as reduced requirement for approvals and access to amenities and evacuation infrastructure, thereby minimising the project risk and making such tenders attractive. Non-solar park tenders generally result in higher tariffs because land acquisition, among other things, is a costly affair for developers, particularly in the case of large projects.

The past year also saw a number of innovative tendering methods by state as well as central agencies. These include tenders for 1,200 MW in Karnataka and 750 MW in Madhya Pradesh as well as a 500 MW tender for rooftop projects by the Solar Energy Corporation of India. While some of these were successful, others were not. 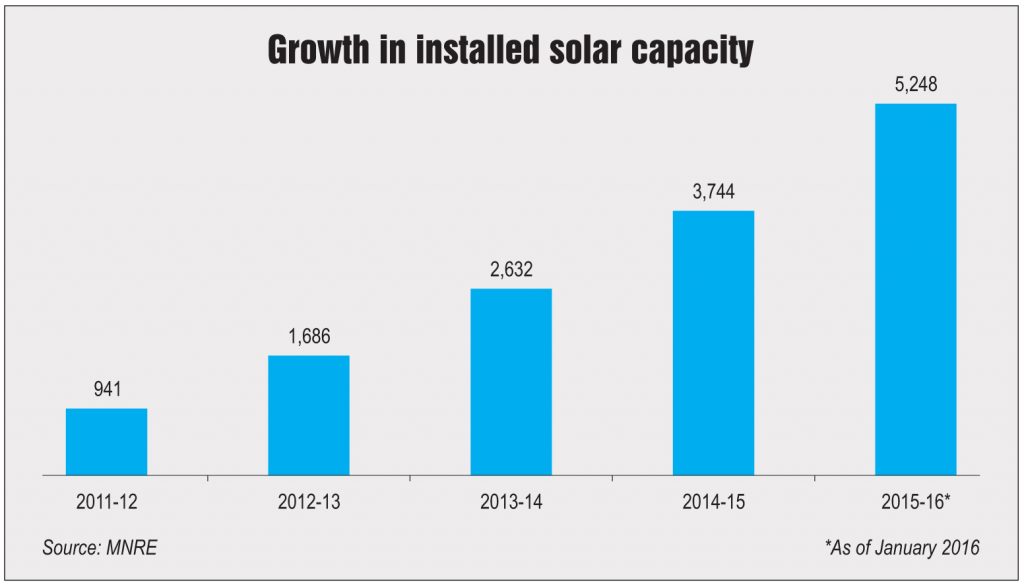 One of the biggest setbacks to the solar power segment has been the filing of Chapter 11 bankruptcy by SunEdison in April 2016. This has been partly due to the company’s disruptive bidding strategy aimed at winning the maximum possible capacity at any cost. The company is currently scouting for partners to help it develop almost 1.7 GW of its project portfolio in India, and the possibility of this capacity coming online is bleak.  Similarly, there are a few more players such as Sky Power, which resorted to aggressive bidding to win capacity, but are now facing difficulty in raising funds for project development. Further, Welspun Renewables, believed to be one of the most serious players in the solar power space, has decided to exit the segment.

In another adverse development, the World Trade Organization’s Dispute Settlement Panel ruled in April 2016 that the Indian government had violated global trade rules by imposing domestic content requirement restrictions on the production of solar cells and modules as part of the Jawaharlal Nehru National Solar Mission.

Meanwhile, other development challenges that persisted were inadequate transmission capacity and grid stability, and the unavailability of FiT. Transmission infrastructure development needs to match the growth in the solar power segment in order to handle the issue of variability. Forecasting and scheduling needs to be implemented in a timely manner so as to ensure grid stability. Moreover, there needs to be a check on the quality and performance of the plants being set up as they utilise large tracts of land and other resources. Also, proper checks and balances need to be put in place to weed out the large number of non-serious players. 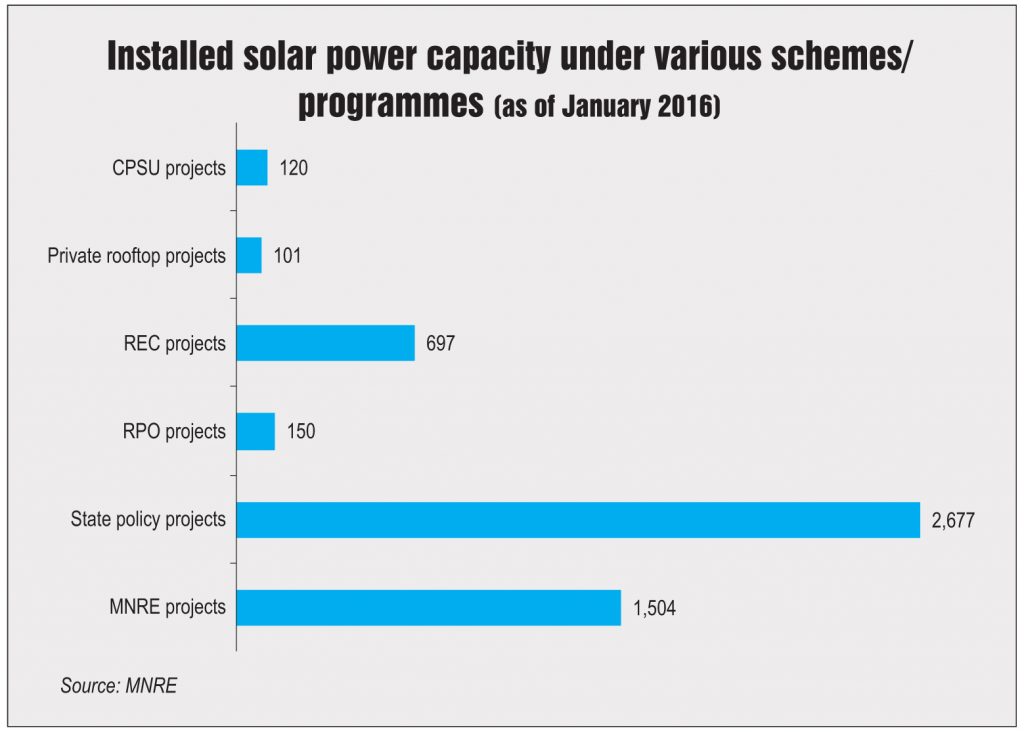 Despite the challenges, the overall outlook for the solar power industry remains bright. The government has stayed firm on its commitment to the segment by ensuring timely policy and regulatory revisions to promote solar power development. Most of the states have started aligning their solar power targets with the revised national-level goals. About 11 GW of projects are believed to be under development under various state and central programmes. Financiers and investors are largely positive on the segment’s outlook, and a large number of established global players as well as domestic industrial houses have announced their entry into the Indian solar space.

The segment’s track record in terms of meeting targets has improved over time. During 2015-16, the solar segment added 3,019 MW of capacity, taking the cumulative solar power capacity to 6,763 MW as of March 2016.

For 2016-17, the MNRE has set an ambitious target of 10,500 MW. Many industry observers believe that the target is unrealistic and will not be achieved. Based on the project awards and tenders floated so far, ratings firm ICRA believes the segment will add 5.7 GW of capacity during the year. As far as the long-term target is concerned, according to a survey conducted by BRIDGE TO INDIA, the solar power industry has pegged the capacity addition at only 57 GW by 2022, which is substantially lower than the government’s ambitious 100 GW target.

The pace of solar project allocations and installations has picked up in the past year. It is estimated that the industry needs to invest nearly Rs 4.7 trillion target achieve the 100 GW target, while additional investments will be required to set up the requisite grid infrastructure to support the upcoming capacity.  To attract this massive investment, it is imperative that the government addresses challenges related to the bankability of offtakers, land acquisition and the availability of grid infrastructure. While the industry is attracting significant interest from domestic as well as foreign investors, greater policy clarity and resolution of existing challenges will be required to catapult the sector to the next level of growth.