Early in its tenure, the government introduced two flagship programmes for fixing the power distribution segment. The Integrated Power Development Scheme (IPDS) was one of these, an initiative aimed at restoring the missing links in the distribution networks (including sub-transmission) in urban areas. The other  was the Deendayal Upadhyaya Gram Jyoti Yojana (DDUGJY), which was intended to separate agriculture and non-agriculture feeders in rural areas.

Unlike its predecessor, the Restructured Accelerated Power Development and Reforms Programme (R-APDRP), which failed to deliver the desired results, the IPDS could have a deep impact on the distribution segment, if implemented successfully.

Here is a quick flashback to the R-APDRP. The  programme was launched in 2008 to reduce aggregate technical and commercial (AT&C) losses in about 1,405 towns. It was limited to towns with a population of more than 30,000 based on the 2001 census (the criterion was relaxed to 10,000 for special category states). Utilities were given a top-down target of achieving 15 per cent AT&C losses (on a sustained basis for a period of five years), and loans were extended by the central government to them for executing projects. These loans were linked to the “actual demonstrable performance” of utilities. Only if the performance was satisfactory, the loan (50 per cent) was converted into a grant.

The IPDS, launched in December 2014, is markedly different in many aspects. To begin with, it aims to cover all urban areas across states as per Census 2011. There are more than 2,600 such towns in the urban areas of the country, where IT solutions are yet to be implemented in the distribution segment. The IPDS would not only cover the 1,405 R-APDRP towns but also the 2,600 urban towns that have not been covered so far. Thus, the benefits of the scheme would be extended to more than 4,000 towns across India.

The targets under the IPDS are need-driven. Utilities are required to identify critical gaps in the network, prepare a need assessment document and formulate a detailed project report. Also, as opposed to a uniform target, a discom-wise loss reduction trajectory has been finalised to bring down AT&C losses by 2021-22 through state-specific measures that are best suited to the state. In terms of funding, about 60 per cent of the project cost would be given as a grant, which could go up to 75 per cent on achieving the milestones.

Another important component of the IPDS is the dissemination of information to digitally savvy consumers through a mobile application. For this purpose, an informative mobile application, the Urban Jyoti Abhiyaan (URJA), has been launched. It  will enable consumers to get information on all IPDS-related parameters (outages, AT&C losses, etc.), register complaints, rank discoms, etc. Another major initiative is the creation of a central website, called the National Power Portal (NPP), which will monitor real-time data from all feeders in the country and display relevant information on the URJA application.

The IPDS entails a total investment of Rs 326 billion (excluding the R-APDRP component). This includes budgetary support of around Rs 253 billion, applicable to two components – sub-transmission and distribution network strengthening, and metering – with budgetary outlays of around Rs 235 billion and Rs 20 billion respectively (see chart). The outlay for the third component, IT enablement (which will involve carrying forward the R-APDRP targets), is around Rs 440 billion.

One of the key requirements for implementing projects under the IPDS is signing a tripartite agreement (TPA) between the discom, the Power Finance Corporation (PFC) and the state government to ensure that the scheme is executed in accordance with the guidelines. Of the 59 discoms, 23 are yet to implement the TPA.

For management, monitoring and timely implementation of the project, the utilities have to appoint a project management agency (PMA). So far, only 34 discoms have done this. 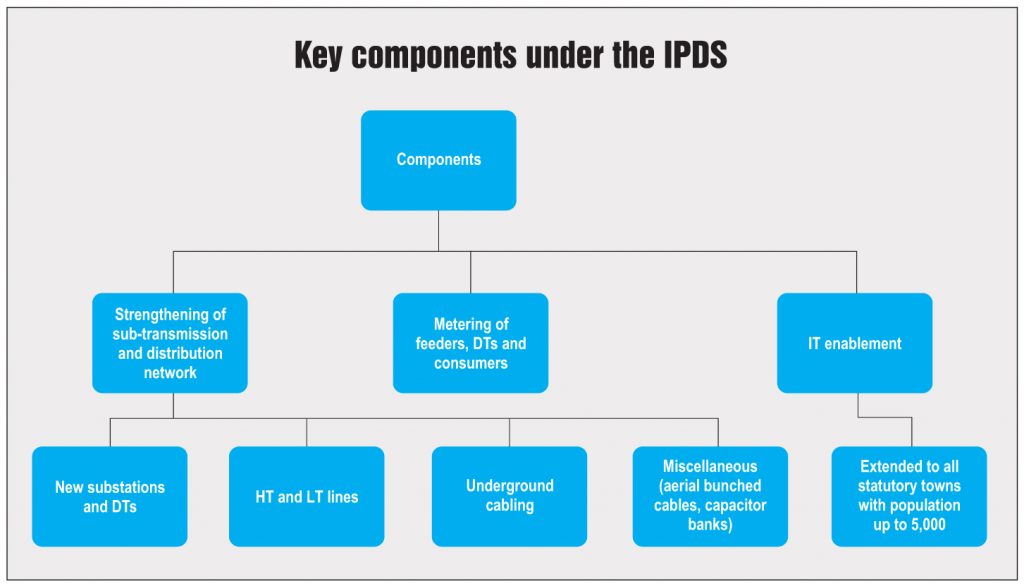 As per the funding guidelines under the IPDS, 60 per cent of the project cost is available as a grant from the Ministry of Power, which can go up to 75 per cent based on the achievement of specific targets (in the case of special category states, the grant figures are 85 per cent and 90 per cent respectively).

Of the grant component, the first tranche, comprising 10 per cent, is released after the project has been approved by the monitoring committee, the TPA has been executed and the PMA has been appointed. As of July 11, 2016, requests for first-tranche funds were awaited from 12 states.

The next 20 per cent of the grant is released after the letter of award (LoA) has been placed by the utilities. see Table 1)

IT enablement for additional towns

At present, IT solutions are being implemented under Part A of the R-APDRP for 1,405 towns. Under the IPDS, IT enablement is proposed to be taken up for 2,600 non-R-APDRP towns as well. This is an important task considering the proposed monitoring of 11 kV feeders in the country. However, utilities can take up IT-enablement projects for the remaining towns after the completion of Part A of all R-APDRP towns (including verification by the third-party agency) in the state and after the provision of feeder data from the “go-live” towns to the NPP.

Feeder monitoring on the NPP

Another important task proposed under the IPDS is monitoring of all 11 kV feeders through the national power portal. Feeders are entry points to the distribution system and play an important role in commercial loss reduction. The NPP is being developed by the National Informatics Centre. It will essentially be a unified portal to collect and disseminate standardised data on power generation, transmission and distribution. 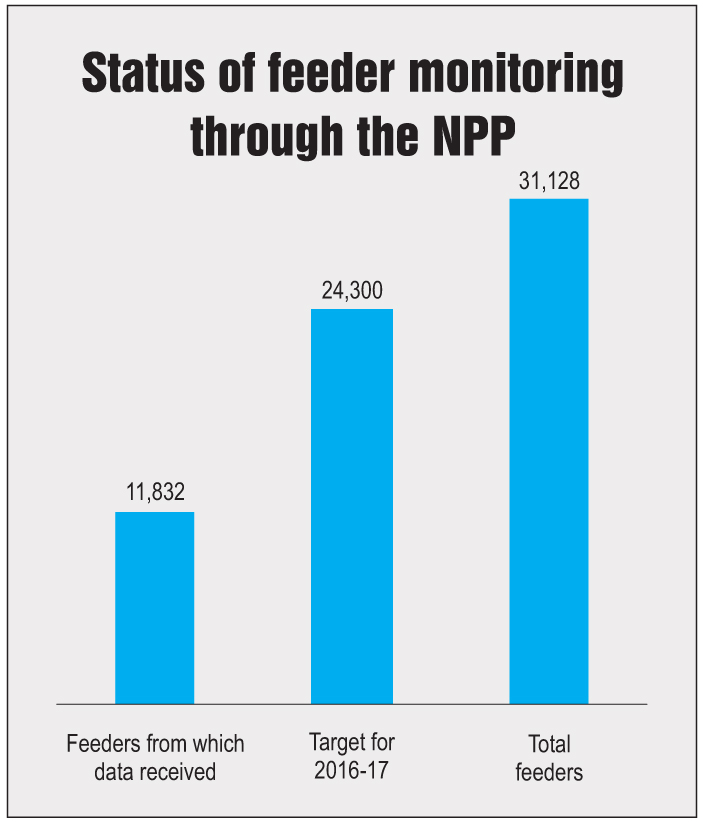 In order to ensure that the information gathered from the IT-enabled go-live towns is shared on a public platform, an Android-based mobile application, called URJA, was launched in June 2016. “About 1,200 feeders have been loaded on the application, and 200 more feeders will be loaded in the next four to six months under the first phase,” noted Piyush Goyal, minister of state (independent charge) for power, coal and new and renewable energy, at the launch of the app at the recently held power ministers’ conference in Goa.

The app, developed by PFC, allows consumers to register complaints, assess town/feeder-wise AT&C losses, town-wise status of consumer grievance redressal, etc. Consumers can also compare the performance of discoms based on the rankings assigned to them on these parameters.

An important parameter proposed to be reported on the URJA app is outage information. State utilities are required to inform consumers about planned and unplanned outages via auto SMSs or call alerts. Data on power reliability in terms of feeder-wise system average interruption duration index (SAIDI)/system average interruption frequency index (SAIFI) is also proposed to be provided on the application.

Another key initiative under the IPDS is the provision of a universal toll-free number “1912” for consumers to report electricity thefts and other complaints. As of July 2016, 44 discoms have implemented the 1912 provision. Of these, in 38 discoms, 1912 has been implemented by all telecom service providers, while in six discoms, it has been implemented by Bharat Sanchar Nigam Limited (BSNL) only. The provision is being implemented by Delhi’s private discoms as well. All states are also working to make this number toll-free. Meanwhile, PFC plans to launch an information, education and communication campaign to spread awareness about the implementation and benefits of 1912 to consumers. 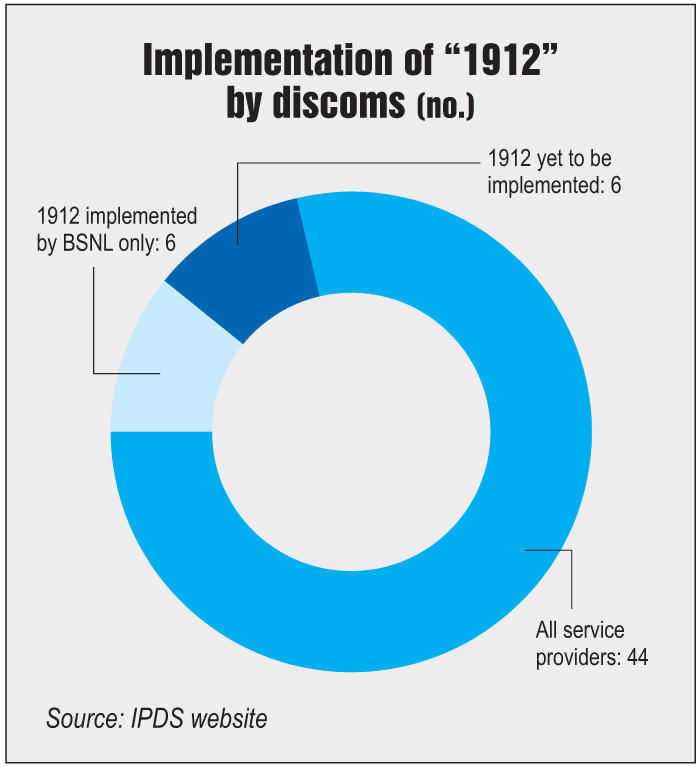 SCADA and Part B projects

Apart from this, work pertaining to supervisory control and data acquisition (SCADA) systems and Part B projects, which were carried forward from the erstwhile R-APDRP, are now being monitored under the IPDS. Under SCADA, 72 towns are being covered and control centres being established. This will be implemented in towns and cities with a population of more than 400,000 and an annual input energy of 350 MUs. As of May 2016, SCADA control centres have been commissioned in 45 towns. Meanwhile, under Part B, which involves regular distribution strengthening projects, 1,221 towns are being covered. Work has been completed in 425 of these towns so far, while another 500 are targeted for 2016-17.

A key highlight under the IPDS is the appointment of coordinators or Urban Vidyut Abhiyantas. They will report to the managing directors of the respective discoms and act as a link between the power ministry and discoms to ensure that all relevant information regarding outage schedules, feeder-wise SAIFI/SAIDI, and other post-go-live data is updated on the URJA app. PFC has selected 55 engineering professionals for the purpose.

Another key initiative proposed is that discoms will now procure only smart meters for all future projects under the IPDS. For this purpose, consumers would be classified into two categories – those consuming more than 500 units per month and those consuming 200-500 units per month. According to the power ministry, around 110,000 smart meters were sanctioned under the IPDS as of March 2016.

Overall, things are looking up for the power distribution segment with a host of new reforms announced in the past six to eight months, including the DDUGJY, the Ujwal Discom Assurance Yojana and the IPDS. The outcome of these initiatives should be visible in the years to come.