Diesel engines and generator sets are among the most preferred options for backup power generation for user industries like telecom, commercial enterprises, construction, IT and retail. Although there has been an overall reduction in the power deficit in the past couple of years, erratic supply, delays in generation projects, and inadequate transmission and distribution infrastructure in remote areas have increased the demand for diesel generator (DG) sets.

Although DG sets have a high cost of generation, they offer advantages such as supply reliability, easy availability due to large distribution networks and convenient installation. According to India Infrastructure Research, diesel-based capacity accounts for about 4.7 per cent of the country’s total installed captive capacity base of over 60,096 MW (covering only 1 MW and above plants).

The DG set market has been witnessing increased production. DG sets now have improved engine life, and features such as synchronisation with the grid, remote monitoring and control, as well as automated data analysis.

In recent years, telecom tower companies have emerged as among the largest users of DG sets in India. There are around 700,000 telecom towers in the country, consuming over 11 TWh of power annually. Even though many towers are switching to green sources of power, many of them still rely on diesel-based backup power to maintain uninterrupted operations. The role of DG sets is particularly critical in rural areas where grid power supply is unreliable and inadequate.

The average DG set runtime for towers in rural areas is 16-20 hours per day. Telecom towers usually deploy DG sets of 10-15 kVA at the sites, depending on factors such as location, power outage pattern and the equipment used. Larger DG sets of 25-62.5 kVA are used for base transceiver station controllers while 200-750 kVA units are used for switching centres.

Other major demand segments include large- and small-scale industries. For these users, investments in DG sets are critical for maintaining their productivity and competitiveness, as frequent power shortages result in loss of production and, therefore, revenues. In the industrial sector, the textile industry accounts for the highest installed capacity. This is primarily because it is dependent on DG sets for meeting its baseload requirements. The chemicals and petrochemicals industries have the second highest share of diesel-based capacity in the counrty.

Mining companies, especially those engaged in the production of coal, lignite, steel, cement and other minerals, also form a key consumer segment for DG sets. Even with large captive power generation capacities for baseload requirements, mining companies frequently deploy portable gensets at their remote sites. DG sets are used to power earthmoving equipment such as dumpers, shovels and excavators.

The hospitality sector, institutional users like hospitals, malls, office complexes and schools, and the banking and retail sectors are other user segments. The most commonly used DG sets in these sectors are of 200-1,500 kVA.

Of late, incremental demand for DG sets is being driven by service sector enterprises such as information technology-enabled service companies and business process outsourcing units, which require backup units for round-the-clock power supply.

A new and emerging demand segment is data centres. Data centres have become mission-critical for many important businesses and support essential information management for large institutions. Also, data centre installations take place under tight deadlines, which often necessitates the use of DG sets.

Moreover, increased population levels and higher standards of living have led to a surge in demand for DG sets from residential complexes. The provision of backup power through DG sets has become a norm, particularly in larger cities, due to the lack of consistent grid power supply as well as for emergency operations like elevators. Water and wastewater treatment facilities also require reliable power.

Going forward, an increased number of real estate construction projects along with an anticipated growth in foreign direct investments under the newly launched Smart Cities Mission is expected to drive the demand for DG sets in the country. In addition, the growing demand for uninterrupted power supply from various manufacturing facilities, mainly automobiles and auto components, is also likely to drive market growth over the next five years. Moreover, the steel sector is projected to witness unprecedented growth, which could significantly boost the demand for DG sets, as the steel industry requires continuous power supply for running processing units, machining, resin moulding, pressing, welding and assembling. 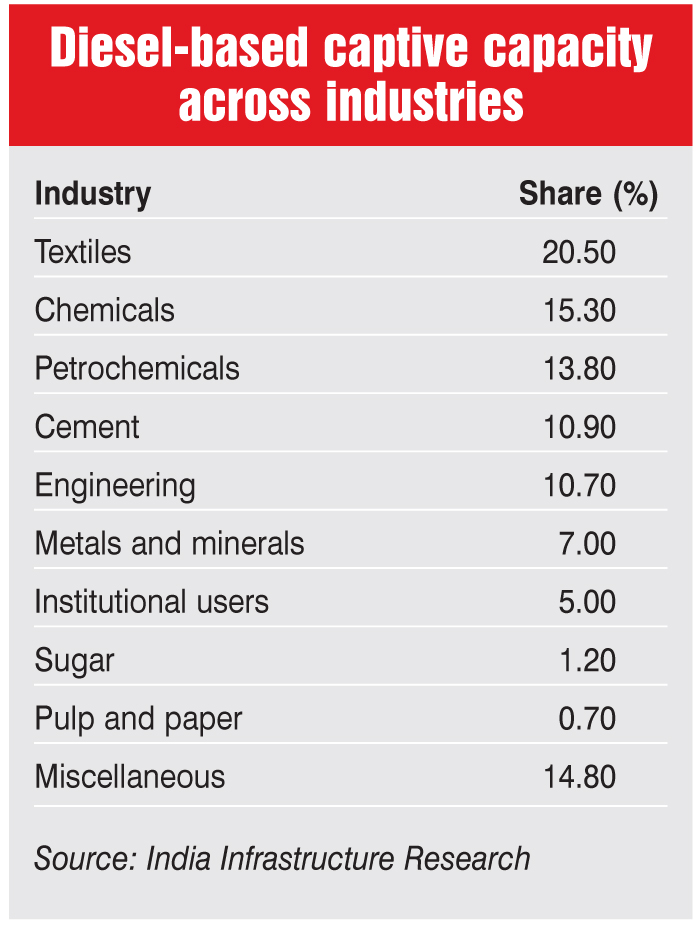 It is envisaged that development plans like the Atal Mission for Rejuvenation and Urban Transformation, which aim to overhaul the infrastructure of about 500 cities across the country, will increase the demand for DG sets.

At the same time, telecom tower operators are looking at hybrid power backup solutions to minimise their operational costs. A growing number of telecom companies are adopting various practices to build green sites and lower their carbon footprint. The government too has advocated the use of renewable energy sources with the Department of Telecommunications issuing a directive, which stipulates that at least 75 per cent of rural towers and 33 per cent of urban towers should be operated on hybrid power by 2020.

However, solar power still poses certain deployment challenges in terms of its high capex and local issues such as the security of photovoltaic installations at project sites. Therefore, despite the shift to renewable energy sources, DG sets are likely to continue to be an important source of power for the telecom industry.

Meanwhile, to avoid the high investment costs of DG sets, industries have started renting them on a monthly or an hourly basis. Of late, this option has become quite popular across all major consumer segments. Suppliers are offering a wide range of temporary rental power units with easy-to-use customer interfaces for improving flexibility, lowering set-up time, and reducing capital requirements, including operations and maintenance, and repair services. Apart from being cost-effective, this option enables customers to focus on their core business activities.

However, as per the latest Load Generation Balance Report of the Central Electricity Authority for 2016-17, it is expected that there will be an energy surplus of 1.1 per cent and a peak surplus of 2.6 per cent for the year. This could be  a key factor affecting the demand for DG sets in the long term.