Indian coal is characterised by high ash content of 35-45 per cent and a significant amount of inorganic impurities. The drift origin of coal results in the high inherent ash content. Besides this, the prevalent practice of surface mining or open cut mining technology for extraction of coal in India results in high ash content as this technology has limitations with regard to the separation of impurities from coal. Due to this, a significant amount of ash is transported along with coal over long distances,  resulting in high transportation costs. Also, power plants utilising this coal are designed for a particular coal quality range but deviations in quality adversely affect the performance and efficiency of the plant. These issues can be largely addressed by coal washing, which removes impurities and ash from coal, thus bringing about consistency in coal quality.

The need for coal washing assumes greater importance with reference to the directive of the Ministry of Environment, Forest and Climate Change, which restricts the transportation of high ash coal for power generation. As per the directive issued in January 2014, supply of coal of not more than 34 per cent ash on a quarterly average basis will be permitted for thermal power stations located beyond 750 km from the pithead, with effect from January 1, 2015, and those located beyond 500 km from the pithead, with effect from June 5, 2016. Further, improvement in power plant availability, increase in the life of the power plant and cost savings in long distance coal transportation also necessitate coal washing. As such, while coal washing capacity exists in the country, it is not being utilised fully.

In the light of the increasing importance of coal washing, Coal India Limited (CIL) has drawn up a massive coal washing expansion plan for setting up 18 washeries in two phases, with a cumulative coal washing capacity of 178.1 million tonnes per annum (mtpa).

In the coking coal segment, CIL accounts for around 70 per cent of the total installed coking coal capacity. It is followed by Tata Steel Limited at 17 per cent, Steel Authority of India Limited at 9 per cent and others at 4 per cent. In the non-coking coal segment, the maximum installed capacity is accounted for by ACB India Limited (51 per cent) followed by Gupta Coalfields and Washeries Limited (25 per cent), and others, which include Bhatia International Limited, Jindal Steel and Power Limited, Indo Unique Flame Limited and BLA Industries (15 per cent), and  CIL (9 per cent).

Coal washing can be done at the mining stage as well as at the post-mining stage. At the mining stage, coal washing involves the elimination of shale bands and selective mining, whereas at the post-mining stage, it involves raw coal pretreatment (dry process) or coal cleaning (wet process). The total cost of setting up a coal washery can be divided into set-up costs and operating costs. As per the Central Mine Planning and Design Institute (CMPDI), the set-up cost of CIL’s upcoming washeries varies from Rs 1.2 billion to Rs 3 billion and the operating cost is in the range of Rs 70-Rs 110 per tonne depending on the capacity. The set-up costs mainly include investments in land, technology and equipment. Similarly, the operating costs include various components such as fuel, labour, spares and maintenance, other consumables, capital charges (depreciation), capital charges (return on investment), electricity and others, including water, administration charges and miscellaneous charges. The current market rates for washing are in the range of Rs 90-Rs 160 per tonne of throughput. This includes crushing charges of Rs 25-Rs 40 per tonne, and washing and stocking charges. 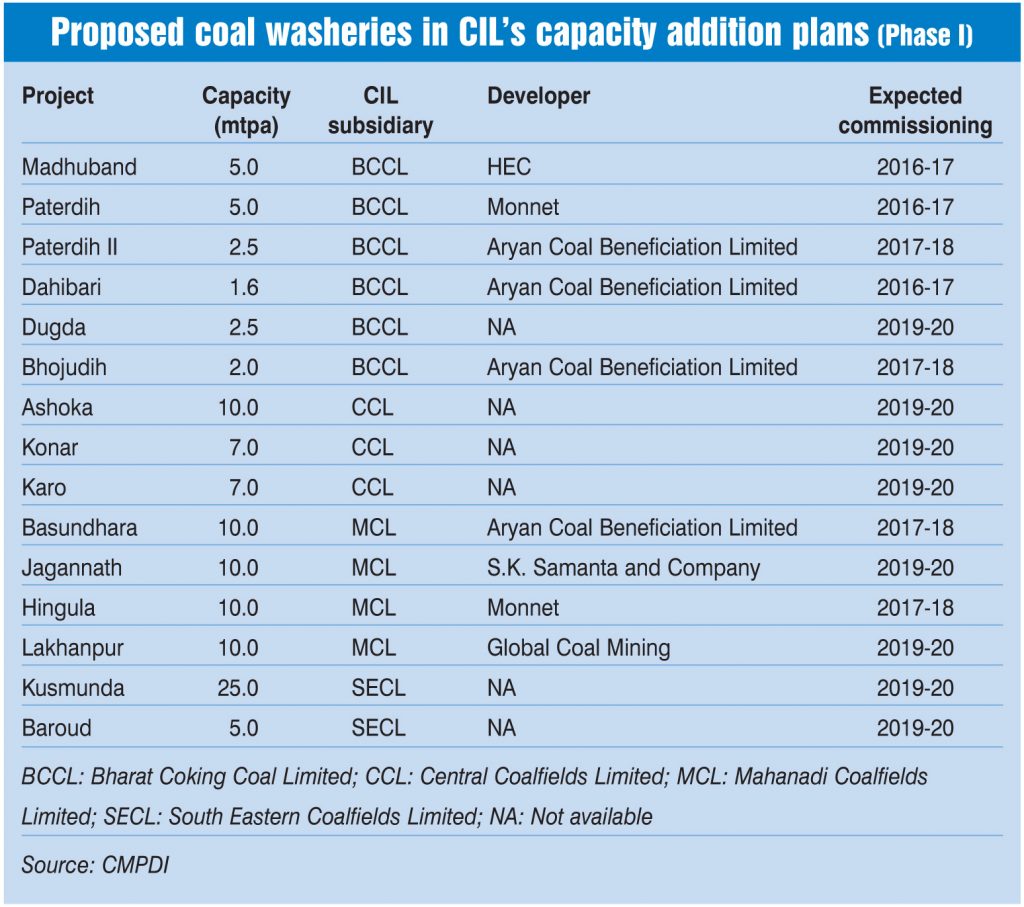 CIL has decided to set up these washeries on the dip side of the coal-bearing areas. These washeries will be developed through various modes such as build-operate-maintain, build-own-operate, engineering, procurement and construction, and turnkey.

The coal washing industry is faced with various issues and challenges. Non-availability of land for setting up washeries is a major issue. The absence of non-coal-bearing and non-forest land in the vicinity of coal mines restricts the development of coal washeries near mines. Delays in land acquisition and environment clearances add to the problems. Difficulty in handling washery rejects after coal washing is another key issue. A portion of the rejects can be utilised as they have some useful heat content. For instance, rejects with a gross calorific value of in the range of 1,300-1,500 kCal per kg can be utilised for power generation. However, scarcity of land for setting up reject-based power plants in the vicinity of the coal mine area restricts the gainful utilisation of the rejects. Also, the non-availability of information about important washability characteristics such as sink and float and size distribution restrict private investment in coal washeries.

Coal washing offers immense benefits such as the transfer of maximum heat content due to improved coal quality; higher thermal efficiency of power plants, leading to lower operations and maintenance costs; and reduced particulate emissions, thus meeting environmental standards. Despite these advantages and the huge market opportunity for coal washeries, this industry faces the challenge of low capacity utilisation and problems in setting up new washeries.

To address these challenges, various steps are being taken by CIL. All future mines with 2.5 mtpa capacity and above are required to have integrated coal washeries. Along with this, CIL is planning to sign a long-term MoU with fluidised bed combustion (FBC)-based power producers for gainful utilisation of the rejects. In this regard, it is planning to set up reject-based FBC power plants with NTPC, in case land is available. These steps will give a boost to the coal washing industry and improve coal quality across the country.