Generator sets are commonly used in both the consumer and industrial segments, with diesel increasingly becoming the more preferred fuel as it is extremely efficient with a higher energy density. In view of the high cost of backup power generation, diesel generator (DG) sets are preferred over other gensets due to their fuel efficiency, cost effectiveness as compared  to other hydro carbonic fluids, lower maintenance costs and longer life. India’s diesel genset market has seen a steady growth due to power supply shortages, rising long-term infrastructure investments and unreliable grid supply.  DG sets are mostly operated using high speed diesel (HSD), commonly known as diesel. Various other liquids are used as well, such as heavy fuel oil, low sulphur heavy stock (LSHS), producer gas, light diesel oil (LDO), furnace oil (FO), biodiesel and blended fuels. HSD is the most commonly used liquid fuel in DG sets due to its higher thermal efficiency and lower cost compared to other fuels.

According to the data published by the Petroleum Planning and Analysis Cell (PPAC) of the Ministry of Petroleum and Natural Gas, HSD consumption in India during 2015-16 stood at 74.6 million tonnes (mt). The consumption of naphtha during the year was 13.4 mt, that of FO and LSHS combined was 6.67 mt, and LDO was 0.41 mt. Over the past five years (between 2011-12 and 2015-16), naphtha consumption recorded the strongest growth at a compound annual growth rate (CAGR) of 4.54 per cent. HSD consumption also increased significantly during this period, registering a CAGR of 3.62 per cent. However, consumption of LDO, FO and LSHS declined.

Global crude oil prices have declined sharply since mid-2014 from a peak of $115 per bbl in June 2014 to around $35 in February 2016. This has been mainly due to the oversupply of crude oil, a fall in demand, a stronger US dollar and a decline in the prices of Organisation of Petroleum Exporting Countries’ (OPEC) benchmark crude oil.

According to the Energy Statistics 2016, published by the Ministry of Statistics and Programme Implementation, out of a total of 75.79 mt of liquid fuel consumed in the country (including HSD, LDO, FO and LSHS), 1 mt was utilised for power generation in 2015. The power sector, therefore, accounted for almost 1.3 per cent of the country’s total diesel consumption. This share has reported a steady decline over the past few years, decreasing from 1.8 per cent in 2011-12 to 1.3 per cent in 2014-15. 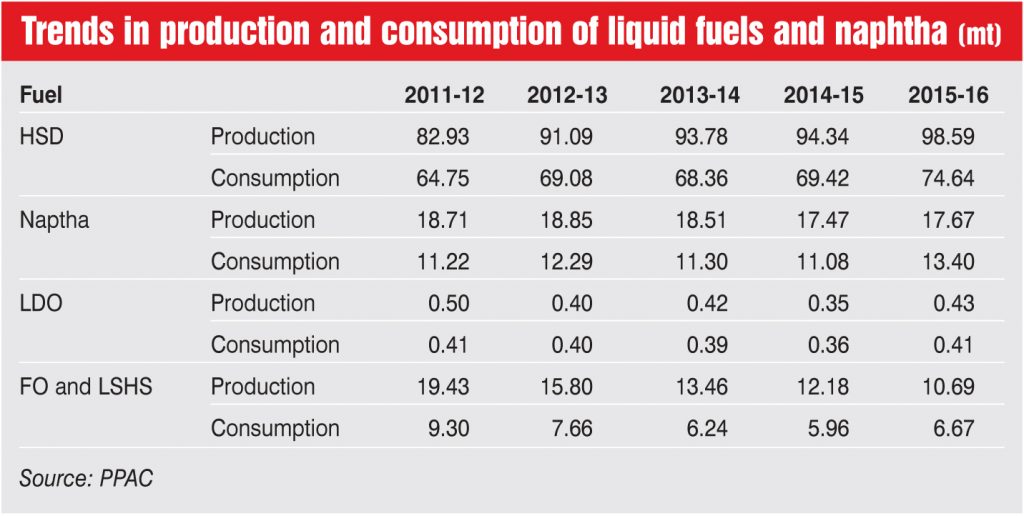 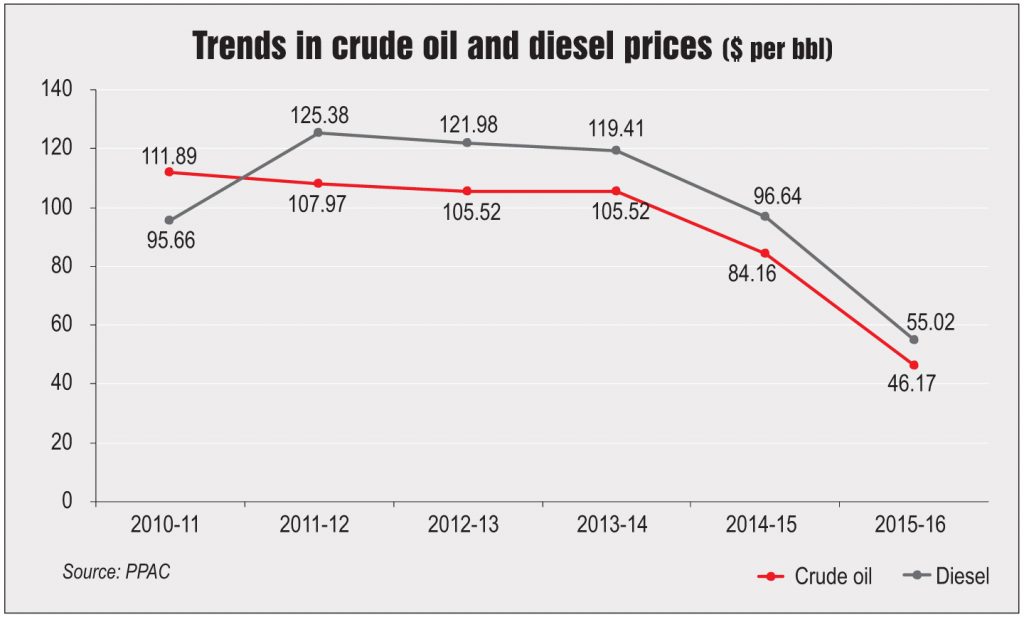 Another key driver of diesel for power generation is the low availability of gas reserves in India. Lack of transnational or domestic gas pipelines pushes up the price of gas, making it a less preferred fuel option. As such, power back-up units like diesel generators play an important part in meeting electricity needs. Diesel generators are preferred over gas generators as the price of the latter is three to four times that of the former, with the same specifications. However, diesel prices are now witnessing an upward trend as a result of deregulation. The high cost of diesel-based power generation acts as a demand deterrent for the fuel.

Increasing diesel prices and growing environmental concerns have been encouraging industries to explore the use of alternative fuels like biodiesel, producer gas and dual fuel. A majority of these can be used by making minor modifications to the existing DG sets. With new technology backup power options, consumers can also make use of solar gensets by prioritising the optimum usage between solar gensets and disesel gensets. Even though various alternatives for diesel are available, the demand for diesel gensets will remain high due to the improved engine life and other features such as synchronisation with the grid, remote monitoring and control, and automated data analysis.