The shortage of coal was one of the biggest challenges that the power sector was grappling with until a couple of years back. However, a slew of reforms in the past two years have dramatically transformed the coal landscape in the country. The country’s largest coal producer, Coal India Limited (CIL) has had a dream run on the production front. It registered a 6.9 per cent growth in output in 2014-15, while growth in 2015-16 was even better and stood at 8.6 per cent.

With the improvement in domestic coal supplies, imports have started showing a significant decline. A 9 per cent reduction was reported in 2015-16 over 2014-15. Coal supply at thermal power stations has reached an all-time high. However, none of the thermal power plants (TPPs) has reported any critical or supercritical coal stock positions.

There is now in fact a situation of oversupply in the market. Low coal offtake by power companies and other industries has led to rising coal inventory levels both at the TPPs as well as CIL’s pitheads beyond optimum levels. According to Anil Razdan, former power secretary, “In the past year, even without meeting the annual target of 550 mt and attaining a production of only about 538 mt, CIL had unsold stocks of around 50 mt.”

In order to deal with the problem of oversupply, the possibility of coal exports to neighbouring countries are being looked at. Production cuts have also been undertaken. Given the declining demand, the coal production target of 1 billion tonnes (bt) by 2020 seems too ambitious, warn industry experts.

However, a major cause for concern is that despite increasing coal supplies in the country, the challenges for the power sector do not seem to end. There are still many power plants that have been meeting a part of their coal requirements through imports or e-auctions. According to industry experts, this is distorting tariffs and hence increasing the stress in the sector.

What factors have led to coal oversupply? Why is the power sector still reeling under shortages? Power Line takes a closer look at some of these issues affecting the demand-supply dynamics of the coal market…

The primary reason for the overflowing coal stock has been CIL’s record production in the past two years, without a commensurate increase in coal demand.

“CIL deserves credit for its performance on the production front. However, demand has not really picked up as expected, probably due to lower-than-expected growth in power generation, which in turn is due to lower-than-expected industrial growth. Also, the precarious financial health of distribution companies has led to subdued electricity demand,” says Dipesh Dipu, partner, Jenissi Management Consultants.

The increase in coal production has been due to a combination of multiple factors including monitoring of select projects, faster environment clearance for new projects, closure of important tenders on time, as well as better coordination between the centre and the state authorities. In addition, outsourcing production to private entities through mine, develop-operate agreements has contributed to the growth of CIL.

On the contrary, demand has failed to pick up commensurately. Coal offtake during the April-June quarter of 2016-17 increased by only 2.9 per cent year on year as compared to CIL’s production growth of 9 per cent. With 90 per cent of CIL’s supplies directed to the power sector, the thermal power sector is one of the key growth drivers for the miner. Plant load factors have, however, come down to 60 per cent and hence, the coal requirement of power stations has reduced significantly.

According to Piyush Goyal, Minister of State (Independent Charge) for Power, Coal and New and Renewable Energy, “The declining trend in coal imports continues in 2016-17. For the period April-May 2016, coal imports reduced by around 5 per cent as compared to the corresponding period of the previous year.” Coal imports are projected to reach 160.16 mt in 2016-17.

Challenges remain for the power sector

Despite considerable improvement in coal supplies, the stress in the power sector has failed to ease, with some plants without firm linkages or operating mines still procuring coal through the market to meet their requirements.

“There are still some thermal power stations which have to get coal through e-auction or imports, depending upon their location and logistics. Although the price differential between e-auction and linked coal has reduced, it adds to the cost of power and tariff for the consumer. In my opinion, this differential is not justified in a situation where CIL is the monopoly producer and has reported large unsold stocks. This is an anomaly,” says Razdan.

The issue largely stems from a policy overhang of the previous government. Back in 2013, when the coal supply situation was grim, the coal ministry had directed the coal companies to supply coal to some power plants through the short-term MoU route till their fuel supply agreements-related issues were resolved.

However, in light of the improved coal supply situation, the coal ministry had earlier this year issued a notification, which states that power producers being supplied coal by CIL through the MoU route will now have to take it through e-auctions as the government has decided not to extend the MoU route beyond June 30, 2016.

Reportedly, there is around 14,600 MW of capacity, which is being supplied coal through the MoU route. The majority of this capacity of around 13,000 MW has power purchase agreements (PPAs) in place.

According to experts, the proposal to ask these plants to switch from the MoU route to e-auctions is creating difficulties. “Coal supplies through e-auction is not a viable alternative for long-term PPA holders with price commitment for 25 years considering variability in pricing and uncertainty of quantum as each time the developer has to assess backwards to see the price that he can offer. Besides, it may result in under-recovery, as the penalty for not supplying power is huge. This is  adding to the power sector stress,” says Ashok Kumar Khurana, director-general, Association of Power Producers.

Further, if these power producers are required to participate in the proposed coal linkage auctions, they would suffer under-recoveries under existing PPAs. “Looking at the comfortable position of coal supply, it is an opportune time for the government to relax the restrictive coal allocation framework, which was imposed at the time of scarcity. This would send correct signals,” Khurana adds. 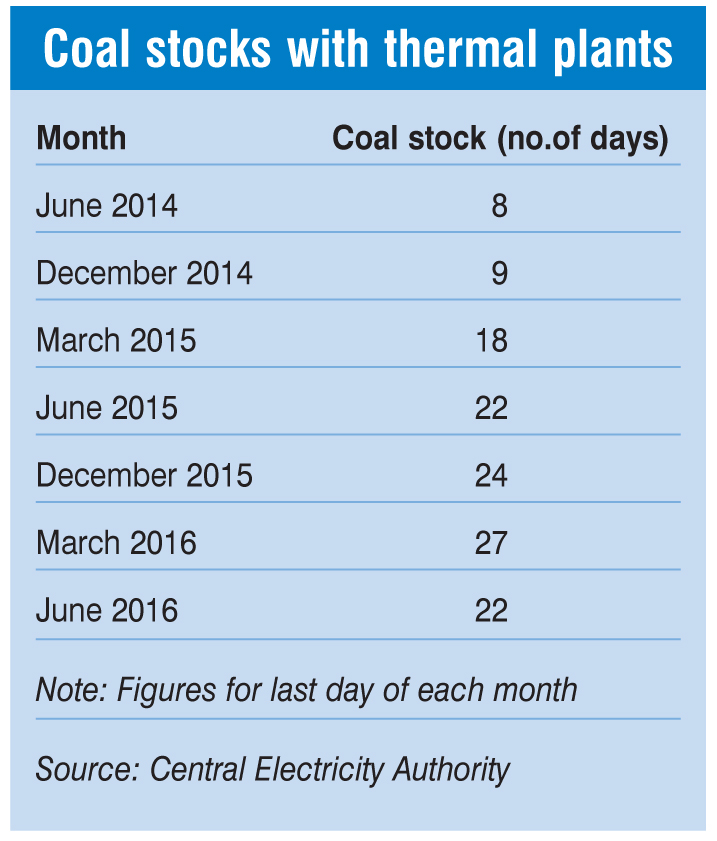 CIL’s coal inventory levels reported an increase of around 4.2 mt between April 2015 and March 2016, and the company ended the year with an inventory of about 58 mt. The company has been in a slowdown mode owing to concern over stockpiling and stock management problems (including deterioration in the quality of piled-up coal and risk of spontaneous combustion).

It undertook production cuts in 2016-17 and achieved only 90 per cent and 95 per cent of its monthly production targets for April and May 2016 respectively. In the first two months of 2016-17, its cumulative coal production was nearly 83 mt, which remained flat as compared to last year.

In addition, CIL is finding it difficult to find sufficient buyers on the e-auction platform. In July 2016, only 68 per cent of the coal offered under e-auction found takers, compared to July 2014, when the corresponding figure was at around 90 per cent. Meanwhile, the coal major is exploring options to export coal to neighbouring countries on a commercial basis, as indicated by the coal ministry. Traditionally, coal has been exported to  Bhutan, Nepal as well as Bangladesh as part of bilateral trade agreements with these countries. However, quantity-wise these exports have been negligible.

CIL is reportedly planning to enter the Bangladesh coal market by supplying coal to the 1,320 MW Maitree project, which is being set up in a 50:50 joint venture between India’s NTPC Limited and the Bangladesh Power Development Board. The project’s coal requirement is around 6 mt annually.

As per media reports, CIL plans to supply coal to Bangladesh-based power companies from two of its subsidiaries, Bharat Coking Coal and North Eastern Coalfields, through the sea route. 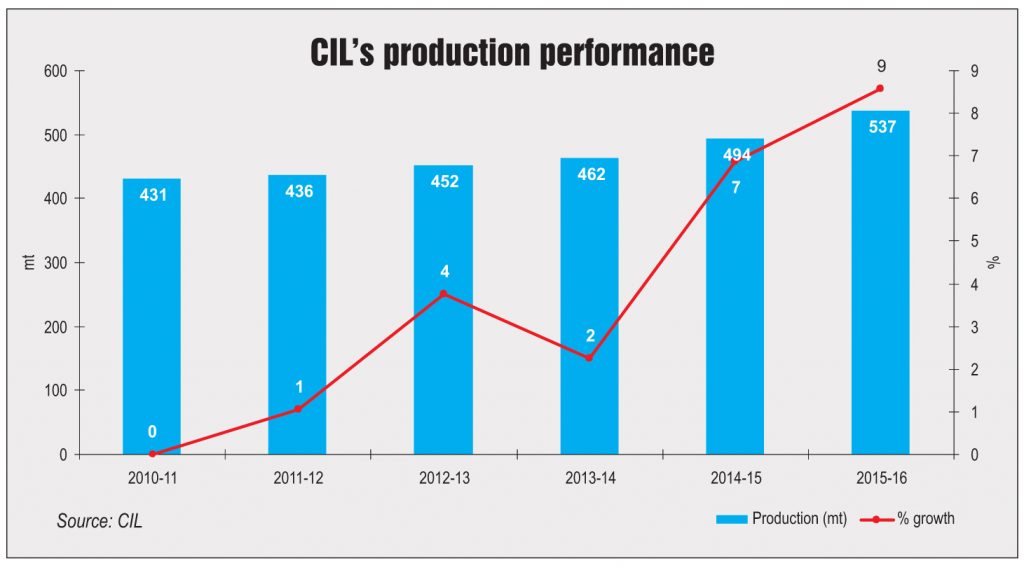 The Bangladesh market, which currently buys around 3 mt of coal a year, would be a lucrative export opportunity for CIL. As per research firm Wood Mackenzie, demand could jump to as much as 15 mt by 2020 as planned power plants worth $8 billion are being set up in the country with help from India and China. Further, CIL’s coal is likely to be cheaper as compared to Indonesian coal due to market proximity.

Meanwhile, industry experts are of the opinion that the current oversupply situation it is the right time to improve the quality of coal, reduce the cost of production, improve productivity as well as reduce prices for unwashed coal. Moreover, strict enforcement of inventory methods such as first in, first out would help to minimise the deterioration of inventory. 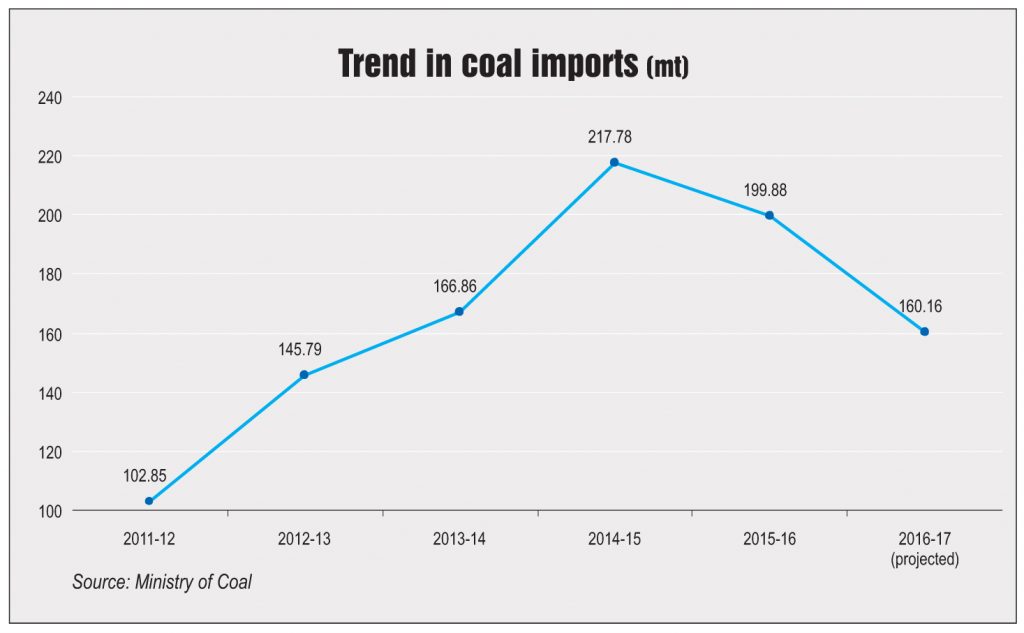 With no takers for domestic coal at present, the key question is whether the coal production target of 1 bt by 2019 is overambitious. In May 2015, CIL released a roadmap for 2020 providing the list of planned projects (535 mines) which add up to 908 mt. – 165 mt from existing operational projects, 561 mt from projects under implementation and 182 mt from future projects.

“CIL will have to reconsider its targets. Even if the anticipated growth materialises, it would come at a lower base and therefore, the trajectory will have to be revised downwards if the market equilibrium is to be maintained,” states Dipu.

According to Razdan, “CIL cannot keep ramping up coal production, regardless of domestic demand. Production schedules of CIL have to be tweaked so as to meet the demand.”

In sum,  improvement in coal supplies is certainly an achievement worth celebrating for the sector. However, efforts to address the problems of oversupply and availability of coal need to be stepped up to avoid taking the sheen off the sector.