The country’s transmission grid has evolved significantly over the past few years. About six years ago, all the five regional grids – north, south, east, west and northeast – were well balanced, with a very small level of power exchange between them. However, the need for creating a national grid was felt due to imbalance between resources and load-centric regions. Since 2013, we have had a national grid, interconnecting all the regions. There is a “one nation, one grid, one frequency” system of 300 GW spread across diverse states in the country. Today, India has the largest operating synchronous grid in the world. Even countries including the US, Russia and China do not have such a big grid. In the past five years, there has not been any grid collapse.

Subsequently, renewable power generation also came into the system. Generation in the renewable sector stands at a compound annual growth rate of 30 per cent. This led to increased challenges for the transmission system. A lot of projects including 11 high capacity corridors had to be taken up by Powergrid to meet the requirement for renewable generation capacity addition. Today, Powergrid owns 130,000 ckt. km of lines, of which 55,000 ckt. km has been added in the past three to four years.

Earlier, the 400 kV voltage was the backbone of the national grid. Subsequently, due to issues related to right of way (RoW), cost, etc., high capacity lines were required. As a result, 765 kV lines were developed. The first 765 kV line was the Seoni-Sipat transmission line, which was installed in 2007-08. In the past seven to eight years, Powergrid has added about 25,000 ckt. km of 765 kV lines, several 765 kV substations, over 100,000 transformers and 40 substations. Such rapid growth coupled with the development of new technology has been achieved only in India. It takes many years for countries to develop a technology but in India, huge requirements have led to the adoption new technology and increased growth.

One achievement that shines out is that no equipment was supplied by domestic producers in 2007-08 but today all equipment is being supplied by Indian companies. In this sense, the power sector has truly upheld the Make in India initiative. Gujarat was a pioneer in this regard.

Despite this growth, the sector has been witnessing tremendous congestion over the past three to four years. The load is uneven and there is unmet demand for power in the southern region while generators in Chhattisgarh and Gujarat are not able to sell power. Congestion despite the phenomenal growth of the transmission system is surprising.

The major reason for this congestion is the lack of a proper planning process. For example, while planning for the southern region, we tried to look at some estimates – the load growth expected in the next five years, expected generation capacity addition, load management, and import requirement from other regions – then multiplied these estimates with a redundancy factor and planned the transmission system accordingly.

However, congestion in the northern region is due to different challenges. The region does not have coal-based power stations. In 2007-08, when generation planning for the grid was done, load centre-based generation projects were planned in addition to pithead- and coastal-based generation, in order to alleviate the pressure on the grid and provide islanding in case of a grid collapse. Thus, the Jhajjar thermal power plant (TPP) was developed near Delhi. Although the Badarpur and Dadri transmission systems were already present, the Agra-Gwalior line was charged at 400 kV to cater to the northern region. Everything was in place but a station drew more than its share and as it crossed 1,000 MW, caused a grid collapse. To resolve this, transmission capacity was increased to 2,500 MW through a 765 kV double-circuit line, but the shortage remained. The main reason for this shortage is that generation in the northern region is costly. Since the generation is low and the transmission capacity is high, the region takes more power from outside. Subsequently, the Jaipur-Gwalior single-circuit line was added and the capacity increased to 3,000 MW, which was again completely utilised. Hence, transmission systems were required to make up for the decline in generation as well as for the increase in demand.

As a result of the government’s planning, several transmission lines have been added in the past two years – Champa-Raigarh, Raigarh-Wardha, Wardha to Aurangabad, Aurangabad-Solapur, Solapur-Raichur, Raichur-Kurnool, and up to Thiruvelam in Tamil Nadu. However, this has only temporarily resolved the problem of congestion.

In the past two years, the power transfer capacity to the southern region has increased from 3,500 MW to 6,000 MW. The development of generation plants has also brought relief to the region. Meanwhile, the power transfer capacity to the northern region has increased from about 1,500 MW to 7,000 MW. In addition, a transmission system project under way for both the regions, which is targeted to increase their capacity to 18,000 MW by 2019. Today, as power can flow anywhere because of improvement in transmission, there is one price across the country of about Rs 2.30 per unit.

As per the Central Electricity Regulatory Commission’s (CERC) guidelines, Powergrid is required to conduct a study and plan a transmission system when a generator seeks LTA and the present system is inadequate. But often either the generation project does not come up as planned or the buyers of power change, thus posing a challenge for the transmission system developer. For instance, a transmission system from Champa to Punjab and Haryana was planned but the power purchase agreement (PPA) was not signed with Punjab, and the generator subsequently decided to sign the PPA with Andhra Pradesh.

Meanwhile, there have been instances when generation plants come up in the neighbouring regions and want to serve the same load centre. For instance, if Punjab needs 2,000 MW and a generator in Chhattisgarh wants to sell to it, we would be required to give LTA to the genco. However, if a power plant comes up in Odisha, which also wants to sell to Punjab, Powergrid will have to again plan the transmission system. Even though the requirement is 2,000 MW, a provision for 4,000 MW will have to be made. Therefore, the CERC needs to change its regulations and transmission planning should be based on the load. Transmission on a general network access basis is being considered to resolve the issue of congestion.

Another challenge in transmission system planning is being posed by increasing renewable generation. Of the current 40,000 MW of installed renewable capacity, about 20,000 MW has been added in the past four years. A large programme worth Rs 1,700 billion is in place to promote renewables. However, the integration of renewable energy with the grid is a challenge because the transient frequency needs to be met. This implies that if the grid is stable with 100,000 MW of solar generation, it should be able to sustain it selfif the same quantum of generation goes down for a few seconds.

RoW is another key challenge for transmission system development. In some states it is just impossible to lay transmission lines as the state governments follow provisions under the Telegraphy Act to compensate farmers, under which the compensation is not up to the farmers’ expectations. The government is now planning to provide additional compensation for land deterioration caused due to setting up of towers. 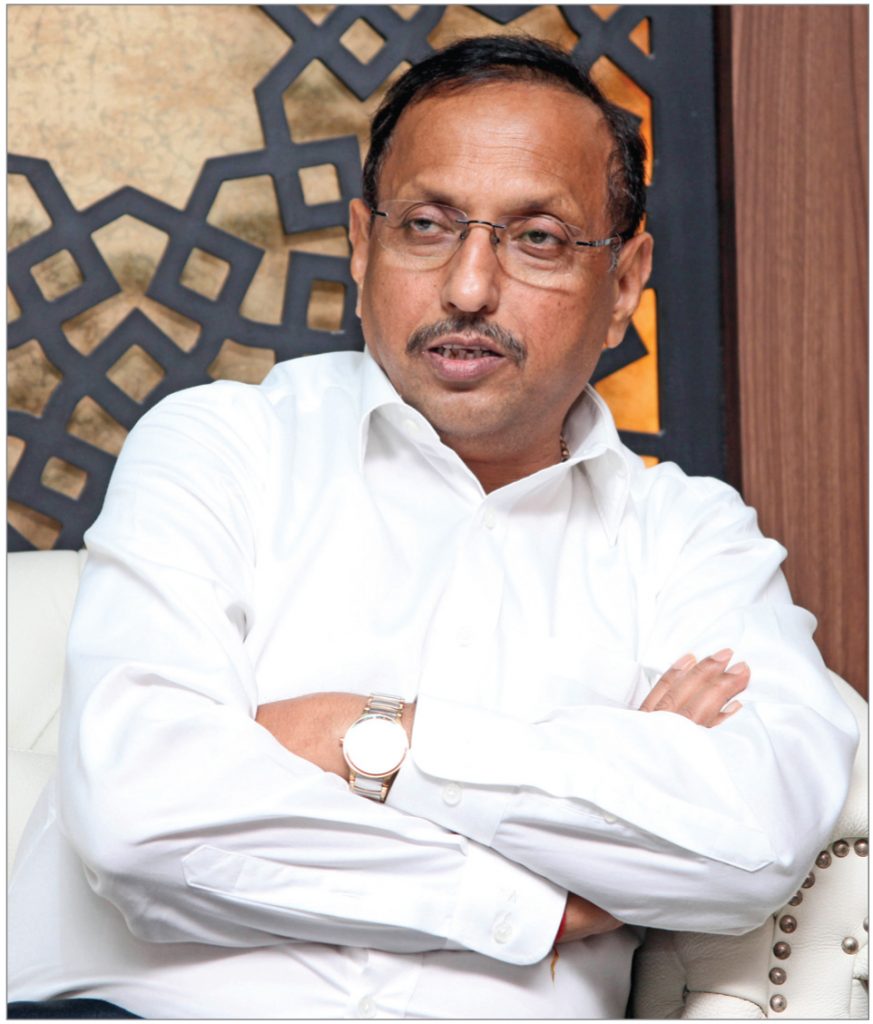 Apart from India, only a few countries such as Japan and China have developed 765 kV double-circuit lines. Even in high voltage direct current (HVDC), we have upgraded technology as we are developing ±800 kV transmission systems. These systems can transfer up to 6,000 MW of power. To put this into perspective, a line alone of this capacity can meet the peak load requirement of Delhi.

We have planned three such lines and are completely confident of the technology. We have developed the 6,000 MW Biswanath Chariali-Agra HVDC project, which crosses nearly 60 rivers and multiple states. However, maintaining it has become an issue. In Assam, bamboo trees have grown up, which touch the line and cause it to trip. In addition, we are developing the 6,000 MW Champa-Kurukshetra and Raigarh Pugalur HVDC projects.

We have also set up a 1,200 kV transmission system. It is a great development because even Russia, which is the authority in alternate current systems, has gone up to 1,150 kV while Japan has only reached 1,000 kV. Since this is the first time a 1,200 kV system is being developed, nothing is being imported and a consortium of 35 domestic companies is supplying equipment for the same.

Another technology, HVDC-voltage source converters (VSCs), is being developed for the Andaman-Kochi transmission project. This line has not been commissioned due to RoW issues. The cost of the line is about Rs 3 billion but the Kerala government has ordered a compensation of Rs 10 billion.

Adequate care is required to maintain advanced transmission systems. For instance, if the 10,000 MW Agra-Gwalior transmission link collapses, India will suffer a massive blackout. Since manually patrolling 130,000 ckt. km of lines is difficult, helicopters and drones are being used. Cleaning is also important as pollutant deposits on insulators lead to faults in transmission lines. We have conducted pan-India pollution mapping to plan the locations of insulators.

Grid management is important and we are implementing the wide area management system to create a smart transmission system. We are installing phasor measurement units at all stations with optical fibre communication control. Further, automation has significantly helped in operations and maintenance of substations. Besides, to deal with infirm renewable energy, static VAR compensators and statcoms are being deployed as they absorb variations in power.

For the Twelfth Plan period (2012-17), the total transmission budget is Rs 1,800 billion, of which Rs 1,100 billion has been earmarked for Powergrid. So far, Powergrid has incurred a capex of Rs 880 billion and it is likely to cross the allocated budget. In the next four years, we need to commission projects worth Rs 1,400 billion, of which Rs 400 billion has already been invested in various works. The major projects include Raigarh-Pugalur, Champa-Kurukshetra and a number of 765 kV lines. In the next three to four years, the shape of the national grid will be completely different.