Significant capex is expected to be made in the distribution segment over the next few years, driven largely by the central government’s twin programmes – the Deendayal Upadhyaya Gram Jyoti Yojana (DDUGJY) and the Integrated Power Development Scheme (IPDS). This translates into a huge market opportunity for all players in the cable and conductor industry over the next few years, with state power utilities planning to procure large-scale power equipment under these programmes.

Requirements under the DDUGJY and IPDS

According to government estimates, materials such as cables, conductors, smart meters and towers are expected to contribute around 80 per cent of the supply cost of sub-transmission and distribution projects under the two programmes.

Under the DDUGJY, rural electrification is being taken up in mission mode to electrify every village by May 2018. To this end, more than 30 per cent of the outlay has been earmarked for investment in cables and conductors. As per official estimates, the total material requirement across states under the DDUGJY is expected to include 856,134 km of aluminium conductor steel reinforced (ACSR) conductors and 13,387 km of all-aluminium alloy conductors (AAAC). Apart from this, 122,535 km of low tension (LT), high tension (HT) and underground (UG) cables would be required (see table).

Similarly, the IPDS, which aims to strengthen the sub-transmission and distribution network in urban areas, is expected to contribute significantly to the demand for cables and conductors. The scheme has a capital outlay of Rs 326 billion (excluding the outlay for the ongoing Restructured Accelerated Power Development and Reforms Programme, which has been subsumed in the IPDS). As per official estimates, the total material requirements under the IPDS are 78,629 km of HT and LT cables, and 246,729 km of conductors (ACSR/AAAC/all-aluminium conductors). 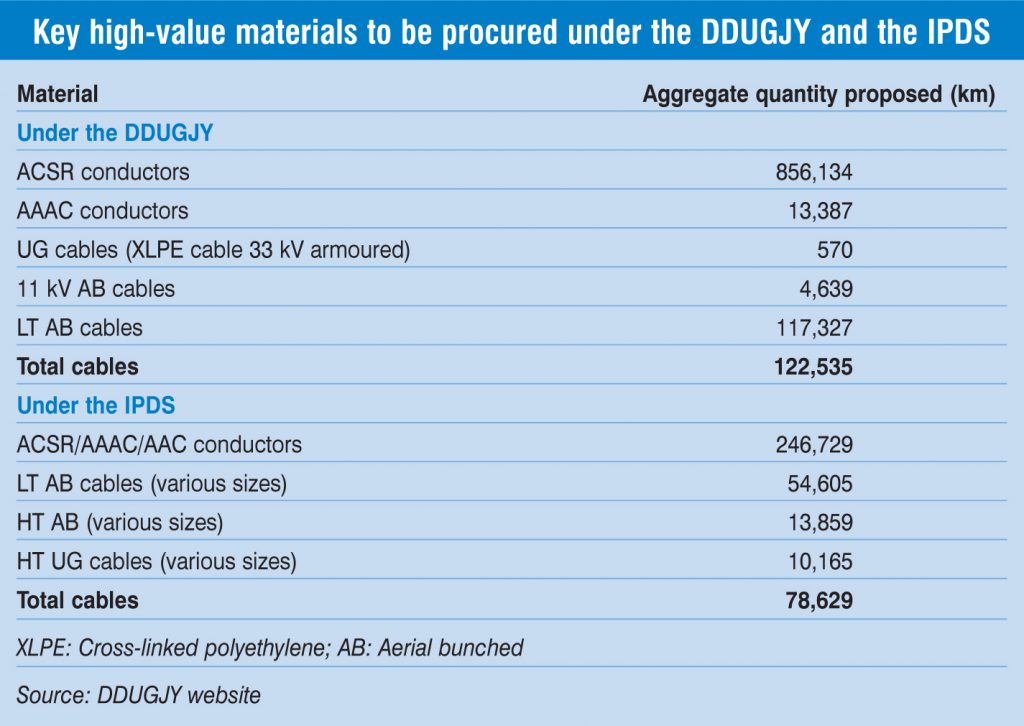 Last year, Power Grid Corporation India Limited (Powergrid) commenced e-reverse auctions for bulk purchase of power equipment like cables, conductors and transformers under the IPDS and the DDUGJY. This will help the states in mobilising major items with standard technical specifications at competitive prices through a transparent bidding process under these schemes.

Other government initiatives such as the National Smart Grid Mission and the Smart Cities Mission also involve significant capex in improving power supply networks and urban infrastructure. Further, the government has identified a number of transmission projects to be bid out in the near future.

Capex by the country’s biggest transmission utility, Powergrid, augurs well for the cable and conductor industry. With approximately Rs 1,130 billion tied up in ongoing projects and an expenditure of Rs 310 billion planned for new projects and tariff-based competitive bidding projects, Powergrid is planning to complete various transmission lines and substation projects over the next few years. Significant investments are also expected to be undertaken by Powergrid as well as state transcos under the Green Energy Corridors project.

In sum, the huge capital expenditure, planned development of infrastructure, combined with ample potential for future expansion in the transmission and distribution segments, present an optimistic business outlook for the cable and conductor industry.