In an attempt to stay ahead of the curve, distribution utilities today are looking to transform their business models through digitisation. A case in point is Andhra Pradesh Southern Power Distribution Company Limited (APSPDCL). The utility plans to implement a slew of digital strategy initiatives for enabling process automation, digitisation of processes like new service applications, payments, consumer complaints, and operations and maintenance. Further, the real-time monitoring of interruption for all feeders, ensuring interruption-free power supply to all consumers and implementing new technologies to improve the reliability of power supply are some of the other initiatives that the discom is currently focusing on. Smart meters for high-value customers will also be introduced.

Set up in March 31, 2000, APSPDCL currently serves a consumer base of over 11 million, spread across eight districts of Andhra Pradesh. Initially, the discom was formed for six districts — Krishna, Guntur, Prakasam, Nellore, Chittoor and Kadapa. However, after the bifurcation of erstwhile Andhra Pradesh into the two new states of Andhra Pradesh and Telangana in June 2014, Anantapur and Kurnool districts were added to APSPDCL’s purview, taking the total area served currently by the discom to 118,119 square km.

The discom’s performance has been fairly reasonable. APSPDCL was ranked fourth in a study on discoms that have been able to reduce their aggregate technical and commercial (AT&C) losses, conducted by Power Finance Corporation (PFC) in 2016. It also received the “Best Discom” award for implementing the Domestic Efficient Lighting Programme (DELP) in 2015. Also, APSPDCL’s rural electrification efforts have played a key role in helping Andhra Pradesh achieve the “100 per cent electrified state” tag.

APSPDCL has been undertaking multiple initiatives for improving its operational aspects. Funds sanctioned for the utility under the Deendayal Upadhyaya Gram Jyoti Yojana and the Integrated Power Development Scheme are being utilised for the reduction of line losses at different voltage levels.

The discom has also implemented the high voltage distribution system (HVDS) to take high voltage lines as closer to the load as possible. Under the funding of Rural Electrification Corporation Limited (REC) and the Japan International Cooperation Agency, more than 212,000 agricultural services have been converted into HVDS and the balance 400,000 connections will be converted by 2018. APSPDCL has also undertaken fibre grid-based data capture initiatives to monitor the network.

As the first step towards digitalisation, the utility has introduced digital services for several consumer-centric services. “Digitisation of processes like new service applications, payments and consumer complaints has already been carried out by APSPDCL,” says H.Y. Dora, chairman and managing director, APSPDCL. He adds that spot billing, computerised collection centres, any time payment machines, online and mobile app payments, Pay U money, Apna CSC, etc., have also been introduced to enhance customer services.

The utility has also launched various mobile applications for the quicker dissemination of information. The AP VidyutPravah is one such app that helps share the supply position, reliability levels and scheduled power outages with the public. The utility has also integrated with REC’s UrjaMitra app launched by the central government for outage management notifications. There is also an e-office facility for employees to induce faster decision making within the organisation. To improve reliability, APSPDCL has an outage management system (OMS) in place for monitoring and servicing interruptions, feeder/DTR loads, etc. Supervisory Control and Data Acquisition (SCADA) has also been implemented for the remote monitoring and control of various assets, along with the implementation of the online distribution transformer (DTR) tracking system for DTR health monitoring. Pilot studies have also been conducted in Sricity for providing uninterrupted power supply to all and will be extended across all towns under the Restructured Accelerated Power Development and Reform Progamme. APSPDCL is also undertaking the installation of LED street lights, and replacement of energy efficient pumpsets, off-grid solar pumpsets and energy efficient fans under DELP.

Its future plans include metering reforms by installing smart meters for high-value consumers and prepaid meters for government and public sector consumers. Some of the other initiatives planned by APSPDCL include the adoption of dynamic tariff for selected consumer categories, which is likely to prepare the discom better to compete in the market and convert high variable cost stations into flexible generators for cost optimisation. For encouraging the use of cleaner and sustainable energy sources, the discom has come up with a proposal to install 30,000 grid-connected solar pumpsets in the next three years. 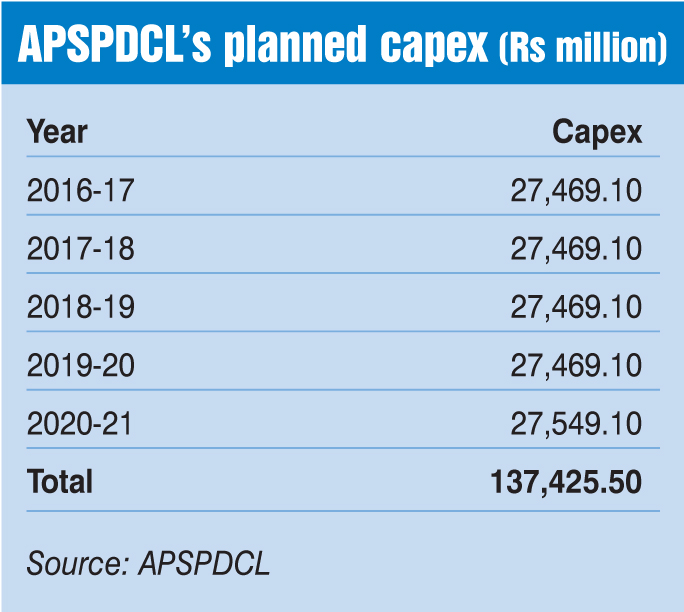 Besides these initiatives, there is a shift in focus of the utility towards surplus energy management and renewable energy integration.

A three-fold increase in the share of renewables is expected in the state by 2021, which would present a major challenge for the utility’s fuel mix. “As the future fuel mix of discoms shifts towards renewables, the conventional sources have to be flexible in order for the discom to meet its energy needs.” says Dora.

Also, Andhra Pradesh has now become an energy surplus state, which has brought new challenges for the discom. High surpluses have led to the backing down of conventional generating stations. “While this would lead to variable cost savings, fixed costs associated with conventional generators still have to be borne by the utility,” adds Dora. According to him, it also leads to forced seasonal variation in load patterns (e.g. shifting of the entire agricultural load to day-time).

Like other discoms, for APSPDCL too, retaining HT consumers has become increasingly difficult over time. With states becoming power surplus, the energy availability in the power exchange has increased and consequently, prices have fallen. As a result, the number of HT consumers opting for open access (OA) has increased. Moreover, with the MoP’s National Tariff Policy, 2016 declaring Indian Railways as a deemed licensee, the railways have moved towards OA. In such a scenario, retaining HT consumers without decreasing the tariffs for the category is a matter of concern.

These challenges, notwithstanding, APSPDCL has demonstrated a strong operational performance on the back of network strengthening initiatives like the introduction of HVDS as well as initiatives for automation such as SCADA implementation and OMS. The company’s focus on digitisation should help the discom meet its goal of providing reliable power and quality services to its customers.