Inadequate tariff revisions, operational inefficiencies and non-timely subsidy from the state governments have resulted in a poor performance by the power distribution segment. The legacy issue of mounting operating losses has lowered the ability of discoms to undertake network strengthening measures,  thus leading to a vicious circle. However, with the launch of the Ujwal Discom Assurance Yojana (UDAY) last year, there is hope of a turnaround in the distribution segment. The discom revival plan has had a promising start with 20 states and one union territory (UT) coming on board.

Meanwhile, there was a steady increase in discom expenditure. Between 2011-12 and 2014-15, discom expenditure witnessed a CAGR of 13.7 per cent to reach Rs 5,024.91 billion. On a year-on-year basis, the growth in expenditure showed a declining trend, from 22.82 per cent in 2011-12 to 9.12 per cent in 2014-15. This decline in growth rate can be attributed to the corresponding decline in the growth rate of power purchase costs, which constitute over 70 per cent of the total expenditure of discoms. Utility-wise, in 2014-15, around 20 utilities recorded an expenditure of over Rs 100 billion each. Of these, MSEDCL registered the highest expenditure of Rs 580 billion, followed by TANGEDCO (Rs 553 billion), PSPCL (Rs 235 billion), WBSEDCL (Rs 196 billion) and TSSPDCL (Rs 199 billion). 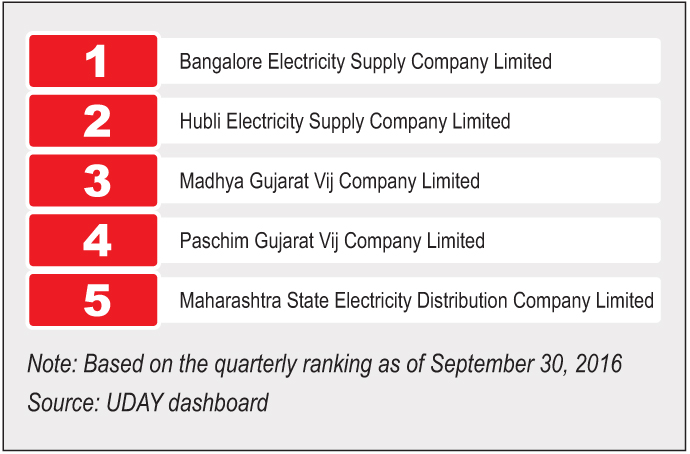 On the operating loss front, although there has been a declining trend in recent years, the quantum of losses continues to be huge. Between 2011-12 and 2014-15, discom losses declined at a CAGR of 8.18 per cent to reach Rs 562 billion. Discom-wise, in 2014-15, out of 56 discoms, 42 were in the red. TANGEDCO registered the highest losses (profit after tax) at Rs 127.57 billion, followed by Jaipur Vidyut Vitran Nigam Limited (JVVNL) with Rs 47.35 billion, Jodhpur Vidyut Vitran Nigam Limited (JdVVNL) with Rs 41.46 billion, Jammu and Kashmir Power Development Department (JKPDD) with Rs 39.13 billion and Ajmer Vidyut Vitran Nigam Limited (AVVNL) with Rs 35.93 billion. Meanwhile, the highest profit-making discom was Tata Power Delhi Distribution Limited with a profit of Rs 3,360 million, followed by Puducherry Electricity Department with Rs 1,570 million, PSPCL with Rs 1,330 million, Bangalore Electricity Supply Company Limited (BESCOM) with Rs 1,130 million and BSES Rajdhani Power Limited (BRPL) with Rs 630 million.

One of the key parameters affecting the financial performance of discoms is the gap between the average cost of supply (ACS) and the average revenue realised (ARR). Currently, the average gap across 16 states stands at Re 0.67 per unit. Although the gap has contracted significantly in the past two to three years (from Re 0.88 per unit on a subsidy-received basis in 2011-12), it remains the key factor affecting the financial health of discoms. Non-timely tariff revisions by the state electricity regulatory commissions are mainly responsible for this. Notably, although tariff revision is a key focus area of UDAY, only 15 of the 21 states participating in the scheme have issued tariff orders for 2016-17. Another factor contributing to the unprofitability of the discoms is the high level of aggregate technical and commercial (AT&C) losses. Currently, AT&C losses stand at 23.98 per cent (across 16 discoms). That said, there has been a declining trend in AT&C losses. Between 2011-12 and 2014-15, these losses declined from 26.63 per cent to 24.62 per cent. Given the high network losses, expanding the distribution network to far-flung areas, as envisaged under the government’s Power for All initiative, would put a serious strain on discom balance sheets as a huge quantum of power is lost while providing connectivity in these areas.

Since the announcement of the scheme, 20 states and one UT have joined UDAY. These are Andhra Pradesh, Bihar, Chhattisgarh, Goa, Gujarat, Haryana, Jammu & Kashmir, Jharkhand, Karnataka, Punjab, Rajasthan, Uttarakhand, Uttar Pradesh, Manipur, Madhya Pradesh, Puducherry, Maharashtra, Himachal Pradesh, Assam, Telangana and Tamil Nadu. The last came on board on January 9, 2017, after several months of holding off. While 12 states have joined the scheme for both operational and financial parameters, eight states – Uttarakhand, Gujarat, Assam, Manipur, Goa, Karnataka, Tamil Nadu and Telangana – and the UT of Puducherry have joined the scheme for only operational parameters.

In terms of debt restructuring, 92 per cent of the discom debt has been taken over by the states under the scheme. Regarding issuance of bonds, the progress has been swift and the UDAY bonds have evoked a positive investor response. So far, nine states have issued bonds aggregating Rs 1,830.83 billion. Bonds for Rs 391.63 billion remain to be issued. The UDAY bonds carry an average interest rate of 8.5 per cent against the 12-14 per cent interest rate at which lenders had extended loans to discoms. Of the total bonds issued, 75 per cent have been bought by banks. 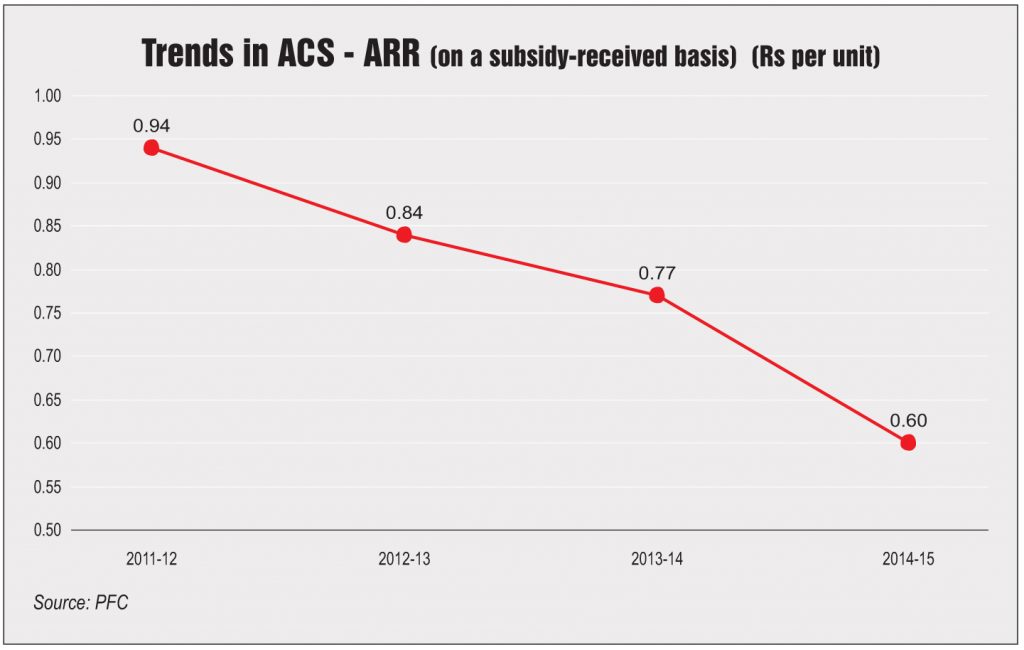 One of the unique features of UDAY, as compared to its predecessors, is its multi-level monitoring mechanism to gauge the discom-wise progress. The latest development in this regard is the launch of the UDAY dashboard, which provides a quarterly update on the various operational and financial performance parameters envisaged under the scheme at the national, state and discom levels. The dashboard can be accessed via the mobile application or the web portal. In order to identify the best and the worst-performing discoms, the power ministry has recently started ranking discoms and states participating under UDAY on a quarterly basis. For this purpose, the ministry evaluates the performance of discoms and states separately, with respect to targets envisaged under the MoU. In the absence of quarterly targets provided by discoms, the annual target is split into four quarters for operational parameters like feeder segregation and metering, and for parameters like AT&C losses, ACS-ARR gap and transmission losses, the annual target is treated as the quarterly target. 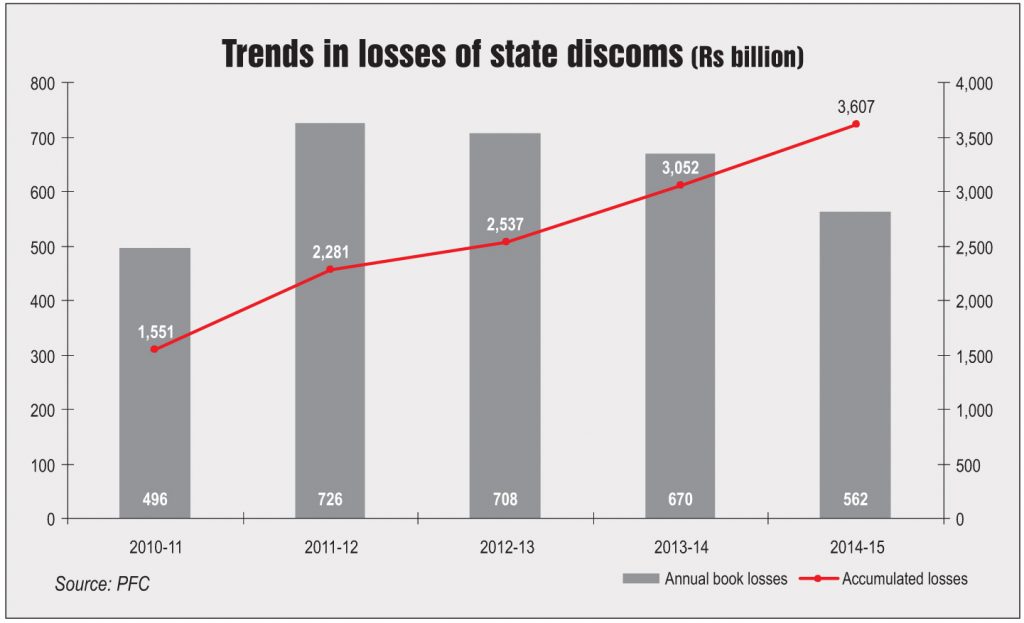 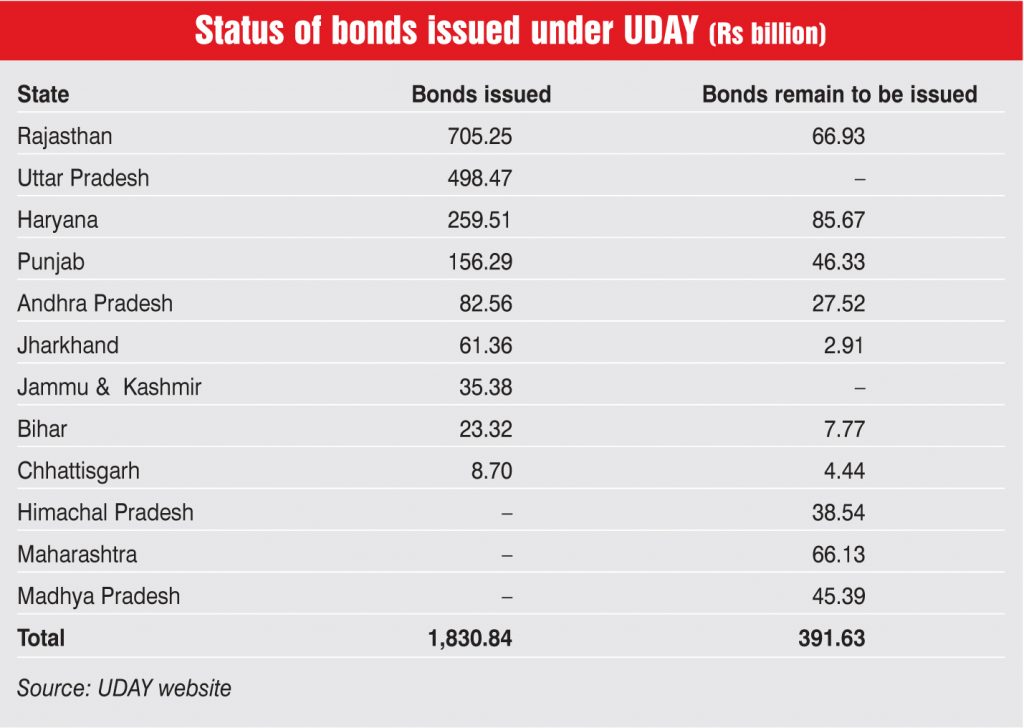 A serious attempt is being made by all stakeholders to revive the distribution segment. On its part, the government is pulling out all the stops to revive the segment by lowering the interest burden and improving the operational efficiency of discoms. The task, no doubt, is huge given the poor discom health, which has almost paralysed the power sector. However, with the government tracking the progress under UDAY at a granular level, there is hope for a turnaround of the segment in the years to come.