The boiler, turbine and generator (BTG) equipment industry has been battling a significant slowdown in demand, which has led to major underutilisation of manufacturing facilities. While adequate manufacturing facilities exist in India for main plant equipment, the lack of orders is a concern for all equipment manufacturers. Structural issues pertaining to delays in power projects and lack of investor interest in the sector have led to fewer projects in the pipeline. In fact, while a few contracts have been awarded mostly by central and state sector utilities, there have been no new orders from the private sector.

Nonetheless, equipment suppliers remain optimistic about the sector’s growth and expect opportunities on the back of demand for the replacement of old thermal power plants with new supercritical units. In addition, the revised emission guidelines by the environment ministry have created demand for equipment and solutions.

A look at the BTG market’s growth so far, the key growth drivers and the outlook for the future…

The indigenous manufacturing capacity in the country is currently over 30 GW. Of this, nearly 20,000 MW is with Bharat Heavy Electricals Limited. During the past three years, the average power project award has been less than 9 GW against the annual rate of 25-30 GW per annum of ordering during 2007-10.

Much of the growth in the equipment industry’s has been attributed to the introduction of the bulk tender concept in India. Back in 2009, bulk orders for supercritical units for NTPC Limited and the Damodar Valley Corporation were approved by the government.  These bulk orders were backed by a mandate that all successful bidders would manufacture equipment for  supercritical units indigenously as per a pre-agreed phased manufacturing programme (PMP). 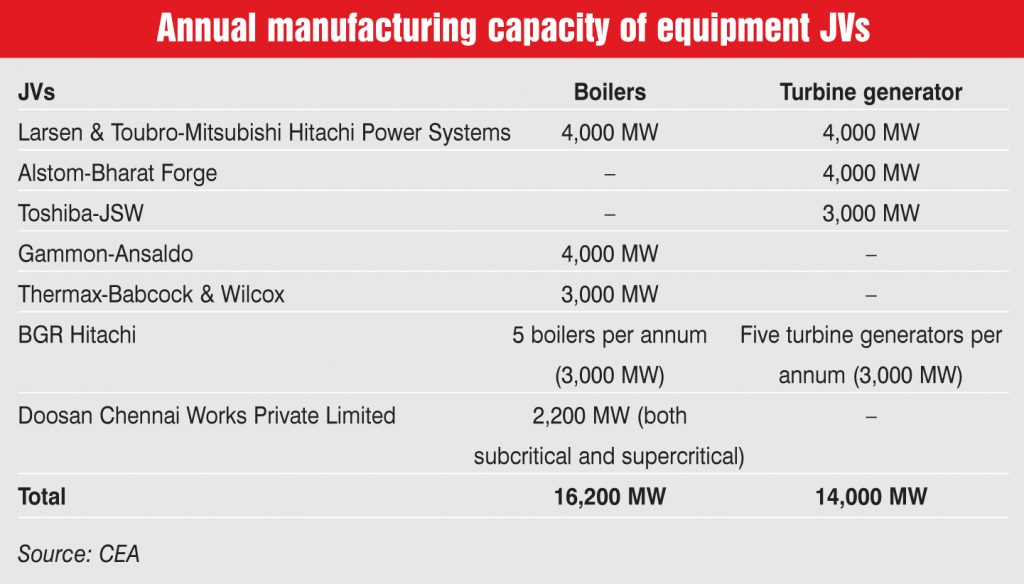 The equipment industry’s long-term outlook remains positive, given the recent government initiatives to improve the power situation and opportunities these present for equipment players. With the government aiming to provide 24×7 Power for All by 2019 and revive discom demand through the UDAY scheme, the demand is expected to increase in the coming years, which would help improve order inflows.

Although the National Electricity Plan recently released by the Central Electricity Authority (CEA)’s  predicts that there is no new requirement for coal-fired power plants between 2017 and 2022, the government’s effort on replacing and modernising old plants is expected to open up a significant market for equipment manufacturers. It is estimated that about 22 per cent of India’s coal-based power plants are over 25 years old, necessitating increasing performance and efficiency upgrades. Further, with the notification of revised emission standards for coal-based plants by the Ministry of Environment, Forest and Climate Change, the replacement demand of ageing power equipment as well as demand for emission control equipment will increase.

Overall, the revival of equipment order inflows is expected to be a gradual process. Most orders in the near term are expected from the central and state sectors, while private players are expected to focus on consolidating their position, restructuring debt and improving the existing plant load factors than venturing into new projects.