The demand for electricity has increased significantly over the years, with an increase in the population and income levels. The power supply has also increased manyfold, but it has not been able to keep pace with the increase in demand, resulting in a persistent gap between the demand and supply. While the gap has declined in recent years, it does not account for load shedding and restriction and control measures practised by various state utilities. Such coping strategies help bridge the demand-supply gap, but also lead to social and economic loss. Given this scenario, demand response (DR) programmes not only helpx to level the gap in a more efficient way and maintain grid security, but also facilitate the supply of least-cost power to consumers and enable renewable energy integration. Though its potential is well known, DR is still in a nascent stage in India, with only a few utilities having implemented or being in the process of implementing DR pilot projects.

DR is a strategy to reduce or shift energy consumption from the stressed hours of a day, when there is very high demand that necessitates the purchase of power at high prices or when the reliability of grid is at risk. Further, with the increase in renewable-based electricity generation, flexibility in demand is important for maintaining the real-time demand-supply balance in the grid. DR essentially requires customers to switch off some non-essential loads during the hours of need. The loads may be switched off either by the customers on receiving signals from the utility or by the utility itself (automated DR). It is a pre-arranged agreement between the utility/the aggregator (intermediate agency) and the consumer with specific conditions of load, price and time intervals.

Common examples of DR include dimming/ switching off lights, raising the temperature of air conditioners, turning off non-essential equipment by industries that can be operated at other hours of the day without affecting production, etc.

Key drivers for DR in India

The adoption of DR and automation technologies to leverage flexible demand can help Indian utilities mitigate investment costs for expensive generation and transmission, improve efficiency in power systems and integrate large-scale variable renewable energy into the grid. Of these, the most important purpose that DR serves is relieving stress on the grid, when it is at a risk of blackout due to sudden and huge fluctuations in voltage. An emergency programme like DR saves the system from damages resulting from power loss and keeps the grid secure, without making excessive and avoidable investments in infrastructure. Further, the renewables-based capacity including solar and wind has increased significantly over the past few years and is likely to grow in the years to come. Integrating this growing renewable generation is a challenging task. With the industry trying to adapt to renewable-based generation with improved forecasting capabilities and alternative flexible generation, DR can help balance the intermittent power from these sources with the demand in the system.

In the Indian context, DR also has an important role to play in reducing load shedding and load restrictions. Rather than imposing controls and restrictions on one or all consumer categories, which is a common phenomenon in India, DR provides an option to curtail the demand of consumers that are capable and willing, without affecting their economic or social well-being. Further, considering the financially stressed condition of discoms, DR can help reduce energy costs. With the reduction in demand, utilities and grid operators do not buy expensive short-term power. They also save money on infrastructure investments. 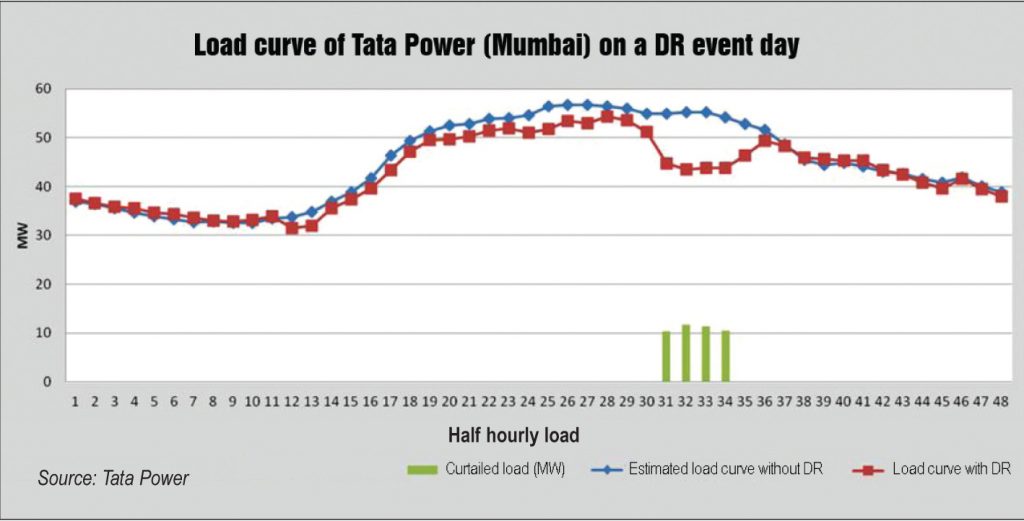 Of the few projects that have been implemented in India, the first was by Tata Power in Mumbai. It was implemented in 2012 with the objective of reducing load during peak shortages, transmission line tripping, generator set tripping and when power purchase costs are high. Each DR event under the programme was of maximun two hours, with total 100 hours in a year. Participation was optional and customers could opt out any time. Participating customers included malls, hospitals, municipal sewage plants, IT parks and airports. The programme was implemented on an aggregator-based model, hence, no investment was required.

Tata Power has also implemented the country’s first automated DR (ADR) project in Delhi. Tata Power Delhi Distribution Limited (TPDDL) launched the project in 2014, covering industrial and commercial consumers with a connected load of more than 100 kW. The project was approved by the Delhi Electricity Regulatory Commission. About 162 consumers with a total sanctioned load of 63.5 MW have participated in the project and contributed towards a collective shed potential of 12 MW. Participating consumers were given the option to opt out of any particular ADR event without any penalty.

It is one of the first projects in the world where ADR and advanced metering infrastructure have been conceptualised together with smart meters, radio frequency mesh-based communication and meter data management system as other components of the project. The project has helped TPDDL in improving the overall reliability of power supply, managing peak power demand more optimally, avoiding expensive power purchase during peak hours, and effectively managing grid emergencies. The integrated project has enabled consumers to analyse consumption patterns closely and optimise their consumption. The utility plans to scale up the programme to 40 MW in the future.

BSES Rajdhani Power Limited is also implementing a pilot project in Delhi on behavioural energy efficiency. Under the 18-month project, 200,000 consumers will be provided with personalised home energy reports (HERs) and an integrated web portal. HERs will provide detailed information to consumers regarding their consumption and on ways to save on their energy bills. This is expected to encourage consumers to reduce their electricity consumption by at least 2-3 per cent. The utility is implementing the project with Opower (acquired by Oracle in June 2016), a leading global provider of customer engagement and energy efficiency cloud services to utilities, with funding support from the US Trade and Development Agency.

A small pilot project was implemented in Rajasthan by ICF International with support from the Shakti Sustainable Energy Foundation and Jaipur Vidyut Vitran Nigam Limited to understand and establish the potential of DR in the area. It was a demand-side bidding project that involved 25 steel industries from three different areas in Jaipur. A total of four DR events, each spanning an hour, were carried out. An incentive of Rs 2.50 per unit was paid to the consumers. The project involved the installation of GPRS-enabled modems at all consumer premises. Customers were notified four hours before the DR event through a phone call or an SMS. It was a study-based project and recognised the potential of DR in the case of high frequency in the system and sudden demand drops due to change in weather.

Based on the few experiences in India, there is no doubt that DR can help in managing peak load and grid emergencies. Significant DR capacity can be developed but it can be used for very short periods and only a few times a year. However, it may prove to be significant enough on an aggregate level. Its implementation is constrained by various factors including difficult monitoring and verification, the reluctance of consumers to participate and the additional cost of setting up the required infrastructure. Meanwhile, improvement in forecasting and analytical tools can also enhance the effectiveness and viability of DR.

Going ahead, with the increased adoption of smart grid functionalities in India, DR is likely to gain popularity. Maharashtra State Electricity Distribution Company Limited has proposed to implement DR as part of the smart grid pilot projects being implemented by it in Maharashtra. Almost all the states have notified demand-side management (DSM) regulations, under which DR programmes may be implemented along with other DSM measures such as the Unnat Jyoti by Affordable LEDs for All scheme, time-of-day tariffs, etc. However, there is need for an overall framework for DR, and the documentation of transaction costs and participation rates in order to assess the outcome of these programmes.