Sterlite Power Grid Ventures Limited (SPGVL), one of the country’s leading private transmission project developers, has been in the news for several reasons over the past couple of months. The company has launched the sector’s first infrastructure investment trust (InvIT), India Grid Trust (IndiGrid), commissioned two projects, one of which was ahead of schedule, and achieved financial closure for its Gurgaon-Palwal transmission project.

In December 2016, IndiGrid, to which  SPGVL transferred two of its operational transmission projects, filed its draft red herring prospectus (DRHP) with the Securities and Exchange Board of India (SEBI) for an initial public issue. It hopes to raise about Rs 26.5 billion through the issue. In fact, SPGVL is among the first few companies in India to offer its projects through an InvIT.

SPGVL is a wholly owned subsidiary of Sterlite Power Transmission Limited (SPTL), a leading provider of cables, conductors and technology solutions in the power transmission segment. SPTL was formed after the demerger of Sterlite Technologies’ power business in May 2015. All these companies are a part of the Vedanta Group.

Given its hi-tech background, SPGVL has launched ground-breaking technologies in the country, which has enabled the company to fast-track project execution. “Besides deploying the best of technologies for project commissioning, we are looking at emerging as a digital company in the next five years,” says Pratik Agarwal, chief executive officer, SPTL.

SPGVL owns 10 projects including 6,950 ckt. km of extra high voltage power transmission lines, as two substations, four gas-insulated substations (GIS) and one pooling station spread across 15 states. The company won all these projects on a build-own-operate-maintain basis via the TBCB process. Of these projects, five have been commissioned while two each are scheduled for commissioning in 2017 and 2018. The Khargone transmission project was won by SPGVL in May 2016 and the special purpose vehicle (SPV) was transferred in August 2016. The project is expected to start commercial operations in July 2019.

SPGVL is the first privately owned company to commission a 765 kV double-circuit (D/C) transmission line. It is also the first to commission transmission lines ahead of schedule including the 400 kV D/C Jalandhar–Samba line (12 months ahead) and the RAPP–Shujalpur line (two months ahead). The Jalandhar–Samba line is a part of the first phase of the Northern Region Strengthening Scheme XXIX (NRSS XXIX). The second phase of the NRSS XXIX includes the Samba–Amargarh line and is currently under construction. Once complete, it will enable over 1,000 MW of power exchange between Jammu & Kashmir and the northern grid, which is 70 per cent higher than the current power transmission capacity.

The performance of SPGVL’s operational projects is constantly being monitored by a dedicated team, which employs external agencies for the maintenance of transmission lines. As a result, SPGVL recorded a line availability of 99.65 per cent during 2016, which is higher than the contractual value, thus making it eligible for almost full incentive.

SPGVL is the first transmission company to use aerial technologies such as helistringing, light detection and ranging (LiDAR) surveys and sky crane to design and construct its projects. The company is focusing not only on introducing new technologies, but also on taking measures that are economical and have minimum impact on the environment.

The company deployed LiDAR technology at the Bhopal Dhule project, executed by its subsidiary, Bhopal Dhule Transmission Company Limited (BDTCL), to conduct topographic mapping with the help of aircraft. It also adopted helicopter stringing for the 765 kV Bhopal-Indore and 400 kV Bhopal lines. This helped reduce the transmission line shutdown time, resulting in minimal disturbance to the local community and the environment. “Transmitted from the aircraft, LiDAR beams helped us function in overcast and cloudy conditions providing high accuracy at high speed. The risk of project execution came down significantly with the use of these technologies,” says Agarwal.

According to SPGVL, it is the country’s first transmission developer to have deployed an air crane to set up a power transmission line in the mountainous terrain of Jammu & Kashmir as part of the NRSS XXIX project. It partnered with US-based Erickson to install transmission towers in the tough Pir Panjal Himalayan ranges using a heavy-lift helicopter, the S64 Aircrane. This will help the company significantly reduce the execution time of the NRSS XXIX transmission project to commission it ahead of schedule.

By deploying advanced technologies, the company has been able to speed up project execution. This results in early revenue inflow as in the case of the RAPP transmission project. “We are building a team that has expertise in implementing transmission networks ahead of schedule in view of the government’s thrust on providing uninterrupted power to all by 2019. In the future, we aim to build transmission lines even faster,” says Agarwal.

The company’s other technological innovations include the completion of the country’s first smart line in Goa during 2016 to transmit more electricity using the existing corridor, without power cuts. This project involved the reconductoring of the existing network with high performance conductors and the installation of optical ground wire and communication equipment.

In order to reduce its debt burden and invest in future projects, SPGVL launched IndiGrid in October 2016. Subsequently, in December 2016, IndiGrid filed the DRHP with SEBI. As per the DRHP, SPGVL is the sponsor of the issue as well as the project manager, SPTL’s subsidiary Sterlite Infraventures Limited is the investment manager and Axis Trustee Services Limited is the trustee.

IndiGrid’s initial portfolio includes two of SPGVL’s revenue generating projects owned by its subsidiaries, BDTCL and Jabalpur Transmission Company Limited (JTCL), both of which are held by Sterlite Grid 1 Limited. The company hopes to raise up to Rs 26.5 billion through this issue. Of this, Rs 16 billion will be used for the repayment of loans while the remaining will be used to sponsor new projects. “The proceeds will be used to pare debt and for future projects,” says Agarwal.

In the past, given the assured returns from SPGVL’s business, raising debt finance for its projects has not been difficult. In January 2016, SPGVL successfully closed the Rs 9.25 billion issuance of non-convertible debentures for its subsidiary, East North Interconnection Company Limited, becoming the country’s first private power transmission company to issue bonds. The issue was rated AAA (SO) by CRISIL and India Ratings, and subscribed to by IDFC, Kotak Mahindra Bank and DSP BlackRock on the day of the issuance. The tenor of the bond is 17.5 years with a call option with the issuer at the end of the tenth year. It is expected that the company would have a benefit of up to 1.5 per cent in interest rates given that bonds are cheaper than loans.

Recently, in January 2017, SPGVL achieved financial closure for its Gurgaon-Palwal transmission project with Yes Bank underwriting debt finance of Rs 8 billion for 15 years for the project. 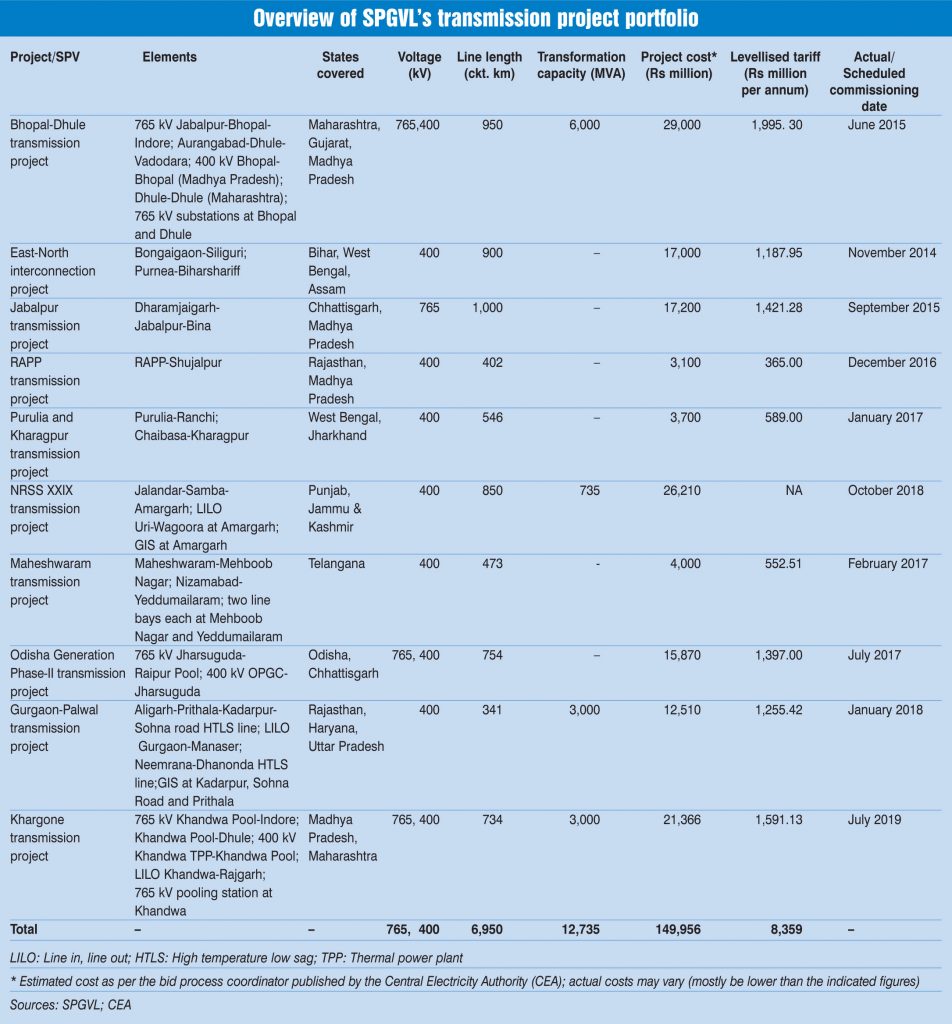 According to Agarwal, “The challenge facing the company is to commission projects faster without compromising on safety. Cutting-edge construction technology, faster environmental clearances and quicker project award will enable us to build the desired infrastructure in one third the usual time taken today.”

SPGVL plans to continue its focus on technology and innovation to become a digital company. In line with this objective, it acquired a minority stake in Finnish company Sharper Shape, in August 2016, to introduce its automated drone-based asset inspection and maintenance services in the Indian transmission sector. The partnership will not only help improve the reliability, resilience and safety of SPGVL’s network, but will also provide these services to other utilities in India. In this regard, SPGVL has recently approached the director general of civil aviation for obtaining a licence to operate drones for transmission line operations and maintenance (O&M) services. Once it receives the approval or when general guidelines on operating drones are issued in the country, drone-based O&M services could be used by SPGVL and other utilities.

Given the limited number of power transmission projects that are put up for private investment by the central and state governments, the company plans to diversify beyond such projects. Backed by its strong experience in the segment, SPGVL is looking for opportunities to build transmission networks for Indian Railways, which plans to electrify tracks where only diesel engines can run at present. This will not only reduce pollution but also costs for the railways. The company is also pitching for a role in the development of transmission infrastructure for the highspeed rail proposed by the central goverment.

In terms of its wish list for the government, Agarwal would like greater public-private partnership in building transmission infrastructure so as to ensure lower tariffs and faster execution. It will also allow the government to end budgetary support for the power transmission segment and divert the funds for other schemes, he believes. While there are limited project development opportunities available for private investment in the transmission sector, the company has certainly created a niche for itself as a prominent developer and technology leader in the segment. This is expected to help SPGVL in its future plans, including raising money through the InvIT.