As of January 2017, the installed coal-based generation capacity stood at 188.48 GW, accounting for around 58 per cent of the country’s total installed capacity. In the terms of ownership, the private sector occupies the highest share, which is around 38 per cent with 72.36 GW of capacity, followed by the state sector with 34 per cent (64.20 GW) and the central sector with 28 per cent (51.93 GW).

As far as the PLF for coal-based plants is concerned, there has been a declining trend in the past five years. Between 2011-12 and 2015-16, PLF on an all-India basis has declined by 11.50 percentage points to reach 62 per cent. Sector-wise, the central sector power plants have consistently performed better than the private and state sector plants. In 2015-16, the PLF for central sector coal-based plants stood at 72.3 per cent, followed by 60.1 per cent for the private sector plants and 55.6 per cent for the state sector coal-based plants. During the first nine months of 2016-17 (April to December) the all-India PLF stood at 59.4 per cent, as against 61.42 per cent recorded in the corresponding period of the previous year. The declining PLF in the country can be attributed to several reasons including growing renewable energy penetration and low power demand from discoms. 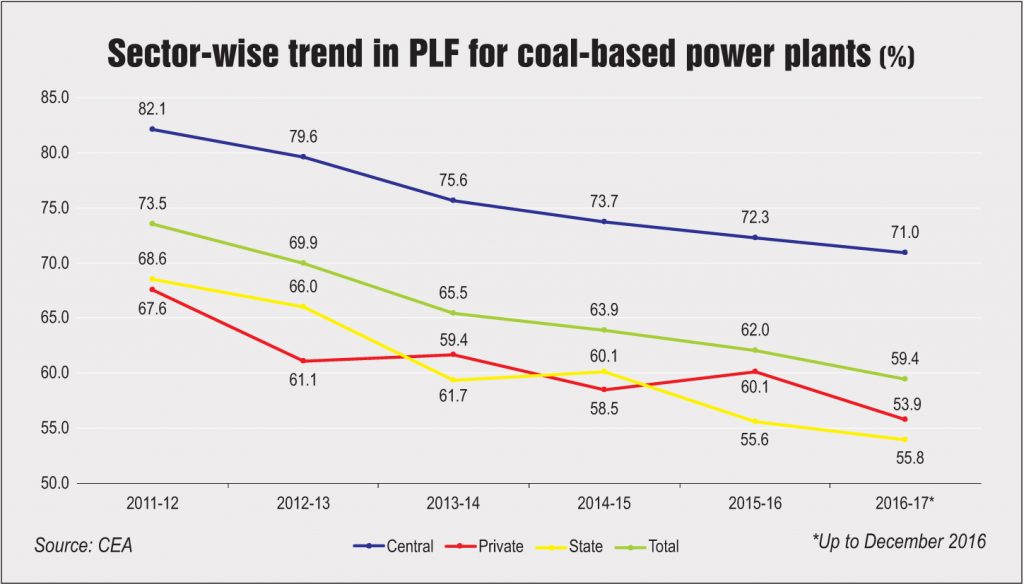 The availability of coal in the country has improved significantly in the past couple of years. In 2015-16, the coal supply to the power plants stood at 510.50 mt, growing at 8.16 per cent over the previous year. Meanwhile, the coal demand from the thermal power plants (TPPs) stood at 673 mt, growing at 11.87 per cent during the same period. With improvement in domestic coal supplies, there has been a significant decline in imports. In 2015-16, the coal imports stood at 156.40 mt, declining by 10.17 per cent over the previous year. The increase in the supply of coal to the TPPs has been primarily on the back of improved coal output by Coal India Limited (CIL).

The major issue faced by the coal-based power generation segment is the poor financial health of discoms, which has significantly compromised their power off-take capabilities. As a result, there is huge operational generation capacity without power purchase agreements (PPAs). Besides, poor power off-take by discoms also affects the PLF of the TPPs. This has been one of the key reasons for the build-up of stressed assets. As per KPMG estimates, nearly 50 GW of the 70 GW of operational coal-based power plants in the private sector are stressed. Further, around 80-90 per cent of the under construction plants in the private sector are under stress. Apart from the absence of power off-take agreements, there are some other factors responsible for the under recovery of generation cost such as lack of clarity regarding change in law provisions, low merchant power prices in the country and delays in the new coal linkage policy.

Another critical challenge faced by both the upcoming and operational power plants is additional capital expenditure required to comply with the tightened emission and water consumption norms set by the Ministry of Environment, Forest and Climate Change in December 2015. According to ICRA estimates, the new norms will affect 187 GW of operational coal-based plants and 74 GW of upcoming projects, and entail a capex of nearly Rs 1.2 trillion. 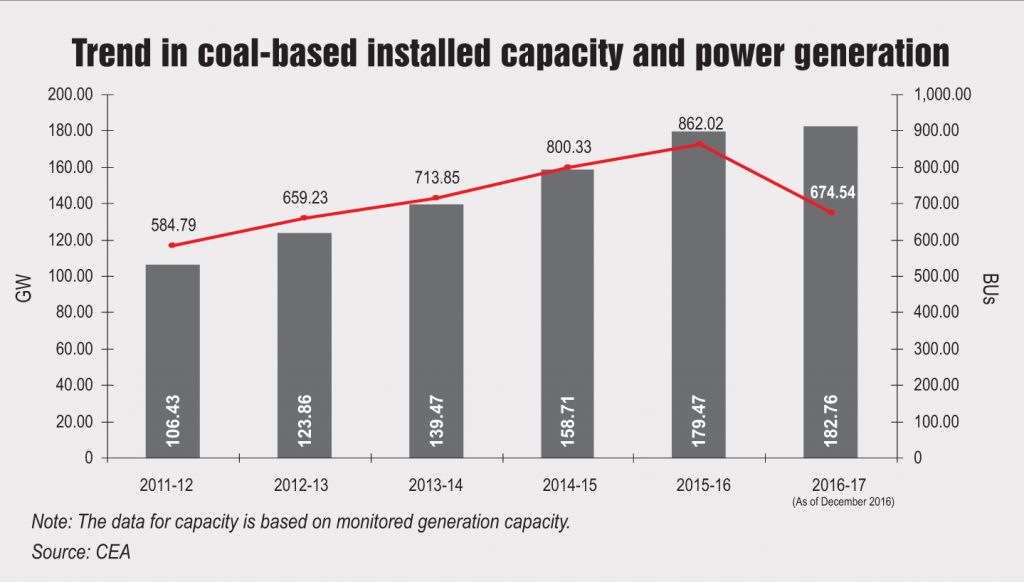 Another issue facing the coal-based power generation segment is the frequent rescheduling of TPPs. The coal-based plants are designed as constant output or baseload plants and when subjected to cyclic or frequent ramp up and ramp down, they face reduced efficiency, require more maintenance, lower equipment lifetime, etc. Besides, there is no provision to facilitate operations at technical minimum of the plant under PPAs. Further, with large-scale integration of renewable energy sources expected in the coming years, this problem is likely to aggravate.

Even though coal availability issues have been resolved, coal quality continues to pose a critical challenge. Often, discrepancies have been found between the quality of coal billed and that delivered at the TPP. This has been one of the long-standing issues between the central sector giants — NTPC Limited and CIL. In order to resolve the coal quality issues, the union government has implemented a third party coal sampling policy; however, developers feel that its implementation in the true sense remains to be seen.

Since no new coal-based plants have achieved financial closure in the past two to three years, there are currently no new projects in the pipeline. Besides, the draft National Electricity Plan (released in December 2016 by the Central Electricity Authority [CEA]) for the period 2017-22 has indicated that no new coal-based capacity addition is required. The report states that a coal-based capacity of 50,025 MW, which is already under construction and is likely to yield benefits during 2017-22, will fulfil the capacity requirement for the period 2022-27.

That said, long-term investors view this as a good time for acquisition. As most of the companies in the sector are under heavy debt, they are looking to sell assets to pare their debt. Investors are thus looking at enhancing their portfolio by acquiring operational assets available at reasonable valuation. Besides, they are looking at resolving those issues that the present owners are not able to address due to their stretched finances.

Meanwhile, a key trend that is expected to dominate the operations of the existing plants is a shift towards efficient and environment-friendly power generation practices, driven by the policy push towards renewables as well as the need for coal-based power to compete with other sources of generation. Power plant owners are, therefore, expected to increase their focus on new operations and maintenance strategies, flexibalisation requirements, as well as energy efficiency. In addition, developers are increasingly focusing on areas such as renovation and modernisation of old units. A CEA report states that currently around 32,830 MW of thermal capacity is more than 25 years old. Further, to comply with new environmental norms, retrofits to reduce emissions, improved water management strategies, and  better coal and ash handling solutions are required.

Net, net, the long-term outlook for the sector will be dependent on measures under UDAY to improve power demand of discoms and hence, revive the PLFs of existing projects.