As per an industry study, the direct costs of downtime in India are in the range of Rs 200 billion per annum. According to independent industry body Asia Power Quality Initiative, about 57 per cent of these financial losses are incurred on account of voltage sags and short interruptions, while about 35 per cent of the losses are due to transients and surges. These figures reinforce the need for regulations for power quality and their effective implementation. In India, the regulations for power quality at the central level are specified by the Central Electricity Authority (CEA) and the Central Electricity Regulatory Commission (CERC). At the state level, the state electricity regulatory commissions (SERCs) specify the regulations as per the provisions of the Electricity Act, 2003. While some regulations are in place, a key issue is that these vary in their approach, construct  and applicability. Therefore, there exists a lack of consistency in the way power quality is dealt with in various states.

Another issue is the absence of proper monitoring mechanisms. Distribution losses and aggregate technical and commercial (AT&C) losses are generally monitored by regulators to determine discom performance. In addition, reliability indices such as the system average interruption frequency index (SAIFI), the system average interruption duration index (SAIDI), the consumer average interruption duration index (CAIDI) and the momentary average interruption frequency index (MAIFI) are considered. However, few states have voltage monitoring and management programmes as a part of their electricity distribution regulations. In states that do have monitoring mechanisms, the penalties for non-compliance are too low to sufficiently compensate the end-users. Further, while the majority of states have harmonics limit provisions, there is no clarity on the consequences of non-compliance.

The common power quality aspects covered under the current regulations for distribution licensees include reliability indices such as SAIFI, SAIDI and CAIDI, as well as voltage variation, voltage imbalance, voltage monitoring and management, current imbalance and harmonics. Harmonics, one of the growing power quality issues, is caused by the non-linearity of customer loads. Harmonic currents flow upstream from non-linear loads, through the impedance of cables and transformers, and create harmonic voltage distortion. These currents also create increased heating in electrical cables, leading to premature ageing and overstressing of the electrical insulation. Most of the states refer to the IEEE 519 standard; however, the CEA specified voltage limit is different from this standard. 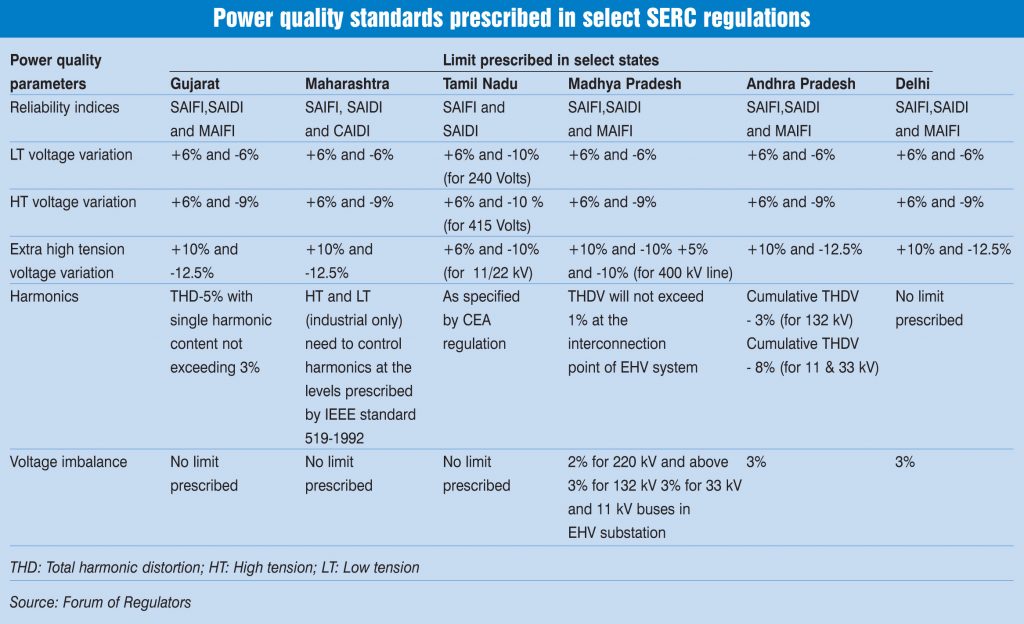 Addressing the gaps in standards

In order to address the gaps in standards, it is imperative to ensure the power quality indices/key performance indicators (KPIs) while evaluating the standards of performance of distribution companies. Power quality KPIs need to include voltage variation, neutral voltage variation, voltage imbalance, dips, swells, transient, interruption at the point of supply and harmonics.

The government and various state regulatory bodies measure reliability supply indices such as SAIFI, SAIDI and CAIDI, and monitor interruptions on a regular basis. There are only a few occasions when the regulator has incentivised or penalised discoms for non-compliance with these parameters.

Bringing consistency in standards is another goal that the regulators should achieve. A critical requirement is that the norms should be consistent among central and state regulations, considering all relevant power quality parameters, and these should be aligned with the widely acceptable international norms.

Although the quality of power is mainly a distribution system problem, transmission systems may also have an impact on it. Hence, the regulations should include the mandatory installation of power quality monitoring instruments at transmission, sub-transmission and distribution substations, and there should be a provision for phase wise installation of power quality monitoring systems at the substations. Measurement and monitoring of harmonics is also a largely ignored area. Therefore, specific provisions need to be made by the regulators to limit harmonics injection by consumers and utilities.

At the consumer level, there is a need to create more awareness and educate consumers about the provisions for penalising utilities that do not adhere to voltage variations. Further, there is a need to specify standards for equipment used at different points of the value chain of electricity distribution and utilisation/consumption. This will enable distribution systems to procure and use equipment of the desired quality.

Net, net, power quality can be the key differentiator for utility business models, which are fast changing and are no more based on 24×7 supply alone. In addition, with the move towards smart grids, the policies and regulations must evolve accordingly to encourage investments and benefit consumers. 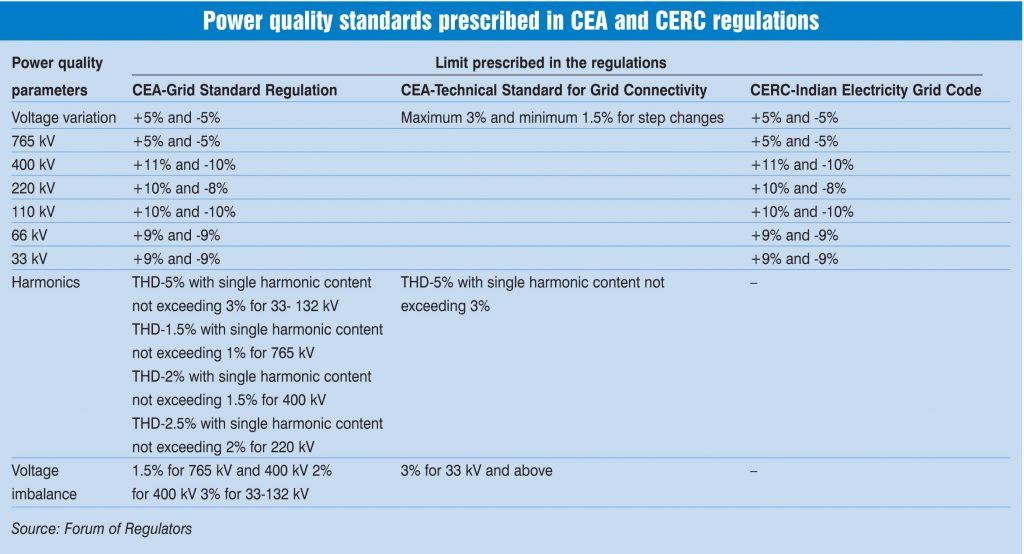